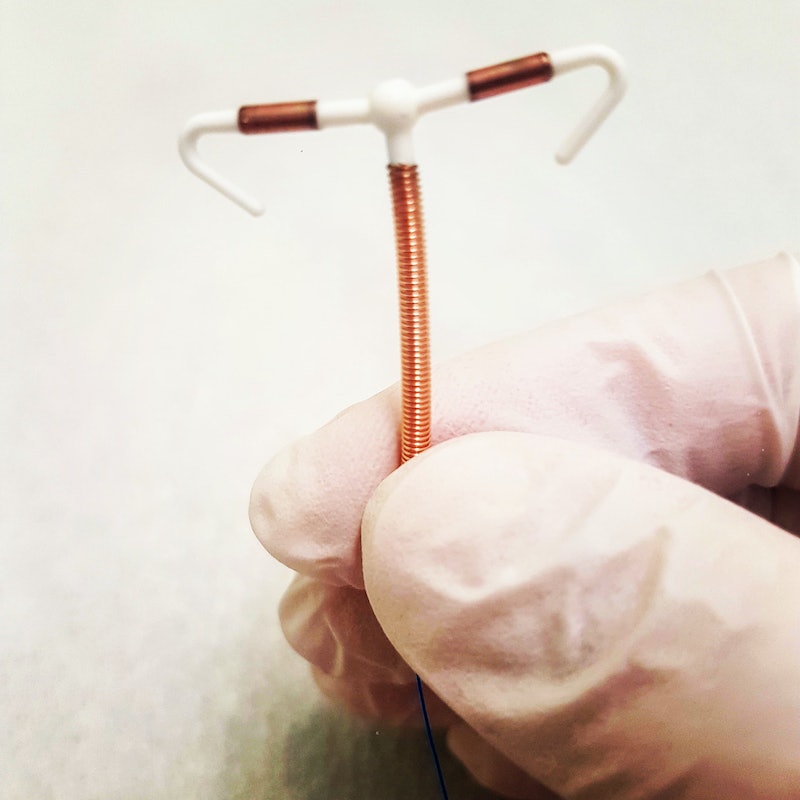 We at Bustle love giving you tips for how to tap into your sexual potential and troubleshoot when things aren’t going your way in the bedroom. But what about finding solutions to those stressful sexual health situations that inevitably crop up when you’re getting down? Emma Kaywin, a Brooklyn-based sexual health writer and activist, is here to calm your nerves and answer your questions. This week’s topic: what having an IUD is actually like.

Q: I got a Mirena IUD placed three months ago, because everyone said it would make my periods less intense. But I’m experiencing a combined ten days of bleeding and spotting each month, which seems like the opposite of that! How long is this going to go on? Will it settle into the light periods and less cramps I’ve read so much about, or is there something wrong with my IUD or body? Help!

A: First of all, congratulations on taking charge of your sexual health and selecting a contraceptive solution that also can help minimize painful cramps and lessen heavy periods. The IUD is a very safe form of birth control that’s becoming increasingly popular in the United States, but putting an alien object into your reproductive parts is certainly not natural and your body definitely takes some time to get used to it. Let's go over what you need to know about having an IUD.

What An IUD Is

IUD stands for intrauterine device, because it’s a little object that actually goes inside your uterus (intra means within). It’s called a reversible method of birth control because once you take it out, you’re able to make babies again right away. The ones currently on the market are shaped like a "T" with a string coming off the bottom that goes down through your cervix and into your vaginal canal. The practitioner who inserts your IUD will cut the long strings that come attached to the device to 1-2 inches hanging down into your vagina so you can feel it if you get all up in there with your fingers — which you’re supposed to do periodically to make sure everything is in its right place.

There are two types of IUDs: copper and hormonal. Both are made of plastic, and the copper ones are wrapped in copper, while the hormonal ones contain progestin, which is the synthetic version of the hormone progesterone that you make naturally. The hormonal IUDs last either three of five years, depending on if you get the Skyla or Mirena, and the copper IUDs (called the ParaGard) work for 10 years. That’s a long time to not have to think about your birth control!

Both the copper and hormonal IUD work in two main ways to stop you from getting pregnant. First, they damage any sperm that end up in your reproductive system, and second, their placement in your uterine lining affects the ability of an embryo to implant and start to be nourished into a tiny human. If this second point confuses you, think of your uterus as having only one baby seat, which is already occupied by the IUD.

Copper is a natural spermicide (but please don’t consider shoving copper items up your vagina — it’s not sanitary). The introduction of copper into your reproductive system triggers your uterus and fallopian tubes to produce a fluid that is toxic to sperm.

The hormone in the hormonal versions of the IUD not only inhibits sperm survival, but also hinders sperm from even being able to meet up with your egg by thickening your cervical mucus so those wee swimmers can’t get through. Additionally, the hormones keep your uterine lining from thickening, which not only makes it an unsuccessful nurturing space for embryos, but also makes your period lighter and less painful.

The great news is that the IUD is one of the most powerful pregnancy prevention tools available. The Centers for Disease Control and Prevention (CDC) reports that only 0.8 percent of people with the copper IUD get unintentionally knocked up, and that number is even lower for those with the hormonal version, at 0.2 percent. If that seems like a lot, compare it to the nine percent of those who get unintentionally pregnant on the pill, or 18 percent with condoms.

But remember — the IUD only stops pregnancy. It isn’t a barrier method, which means it does not protect against sexually transmitted diseases. If you’re sleeping with more than one partner or don’t know the STD status of your partner, use condoms in addition to your IUD. You’ll be protecting yourself against unwanted disease and also be super extra safe in the no-pregnancy department!

Getting an IUD is a process that takes around 30 minutes, from examination and preparation until after insertion. If you want a play-by-play of all the steps involved in the actual insertion with some cute hand-drawn diagrams, you can find that here, and our own Bustle writer Lucia Peters covered Abortion Access Fund board member Alison Turkos live-tweeting her IUD insertion.

The actual insertion only takes a minute or two, but can feel pretty intense. Some people say it’s not that big of a deal, but 10 to 20 percent experience severe cramping and pain and many feel dizzy. Around one percent vomit or faint right afterward. Cramping, backache, and/or light bleeding or spotting can last for around two days after the insertion process.

If you’ve never given birth or even haven’t given birth in a while, you’re more likely to experience pain and these other unpleasant symptoms during and right after insertion.

It can take a while for your uterus to get used to having a foreign object hanging around inside it. Regardless of which type of IUD you have, you can experience spotting between periods for the first three to six months. Also, while there’s always a very small chance that your IUD will fall out, if it’s going to, it will probably happen during your period in the first few months.

Copper IUDs are a great option for people who want to protect themselves from getting pregnant without introducing hormones into their systems. However, this option can make your periods heavier and your cramps more painful. So if you already get painful periods, this may not be the right option for you.

Hormonal IUDs reduce cramps and make most people’s periods much lighter — on average, your menstrual bleeding will decrease by 90 percent after you’ve had it in for the first few months, and some people stop menstruating completely (this isn’t harmful at all and can in fact be helpful for people with certain conditions such as painful endometriosis).

With the hormonal IUD options, your periods can be irregular for the first three to six months, with the first period possibly heavier than usual. Additionally, while the hormone levels in the IUD are much lower than in the pill, you can get some of the same side effects, including mood swings, headaches, tender breasts, and acne. These side effects are rare and usually go away on their own after a few months.

How You Know If Something's Wrong With Your IUD

There are some things, however, that aren’t normal side effects of getting an IUD. If your strings become much shorter or longer than they were when you got your IUD put in, that’s an indication that your device isn’t where it should be — which means it isn’t working and could be perforating your uterus, which can be dangerous. If your periods are much much heavier or last way longer than normal, if you have severe cramps, pain or bleeding when you have sex, unexplained vaginal bleeding at any point, unusual vaginal discharge, or flu-like symptoms, these are all not normal.

If you think you might be pregnant (remember, it’s super rare but can happen) — this is important because if you do get pregnant with an IUD, you’re more likely to have a miscarriage or preterm birth. If you experience any of these, you should contact your gynecologist or whoever placed your IUD and get things checked out immediately.

IUDs are a really great birth control option for many people with uteruses. However, they are also foreign objects that your body has to get used to, and this can take time. Most of the research says that the first three to six months after you get your IUD placed are going to be a bit abnormal as your uterus figures out what the hell you just did to it. From personal experience and discussions with a number of seasoned gynecologists, I’d extend that range to a solid nine or maybe even twelve months.

There’s no shame whatsoever in going in for an extra check up to make sure your IUD is actually where it’s supposed to be, or hopping on a Ibuprofen or medical marijuana (if it’s legal in your state) regimen to manage any cramps or pain you may be experiencing. Ask for support or information when you need it, whether it’s from friends or healthcare providers. And remember: the IUD is totally reversible — if it’s really not working for you, there’s no need to power through. You can get it removed any time you like.