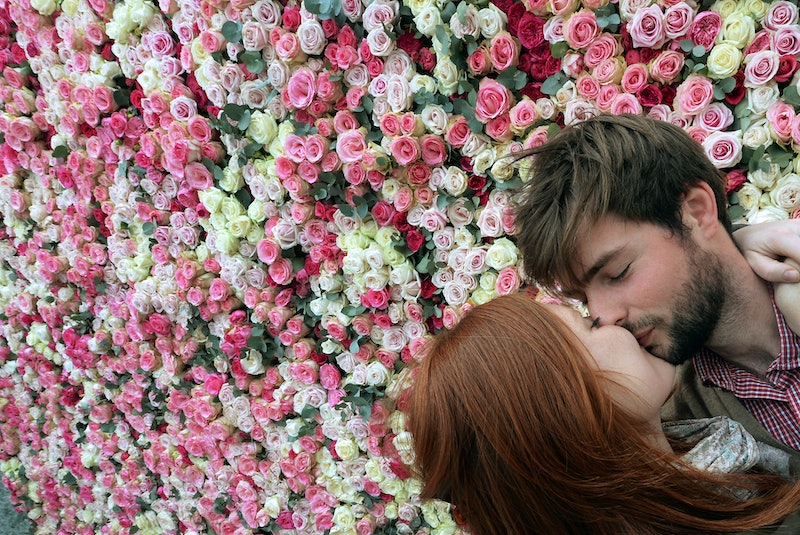 As we’ve learned from binge-watching Bravo TV’s Real Housewives, there is a time and a place for causing a scene, and it’s important that you get this right on February 14th. Because there are conversations that are totally safe to have on Valentine's Day, and there are things you should absolutely not talk about on Valentine's Day unless you're dying for drama. Hear me out.

I know that Valentine’s Day can conjure up some concerns you may have about your relationship, or it can push you to be closer, sharing intimate — maybe TMI — tidbits of your past and inner-thoughts. The free-flowing alcohol doesn’t help, and all those scenes and shades of grey you itched your way through in the theater beforehand didn’t help either. But, there are certain topics that must be avoided that night if you’d like to look back on Valentine's Day fondly — and not regrettably.

A candle lit dinner, for example, at a restaurant with a six-month wait list that your significant other fought to reserve for Valentine’s Day is not the place to grill him about his allegiance to his mother over you, or the boys' trip to Vegas you expected him to back out of after you told him yes but obviously meant no. Nor is it the right time to berate your date as soon as he or she pops in a mouthful of stuffed mushrooms because they’ll be defenseless, unable to refute your accusations mid-chew (and possibly choke).

Here is a list of topics on which you should forever hold your peace — well, at least until Feb. 15. Then, it’s fair game, girl. (Unless it’s his or her birthday, because that would be effed up.)

It's Valentine's Day, and it probably feels like everyone is getting engaged around you except for you. In fact, it feels like you're in a movie dream sequence — singing, dancing, parades, and all — with Ferris Bueller at your side (proposing to someone else, of course). And, that's just the flash mob you got stuck in on the way to dinner.

2. Past Valentine's Days you've spent with other people

It's great that the two of you are on the same wave length and all — open, free, non-judgmental, and unthreatened — but that's because you hadn't yet exchanged past Valentine's Day hookups in detail pre-relationship.

Things are different now. You're more serious, more closely connected. Bringing up your preference for milk chocolate over whipped cream drizzled over your body because the consistency makes more positions possible is probably not going to make him want to devour you at that moment. It will actually probably make him want to skip dessert altogether, and question whether or not he's been adventurous enough for you to keep your interest. Now, imagine how you'd feel if the tables were turned. Yeah, just leave that area of conversation alone.

3. The move-in talk (or any other equivalent)

This one goes for any other major relationship milestone no matter what stage you and your SO are in, like babies for those married couples, or moving in for those who are dating and are thinking of taking the next step (or pushing your relationship and sanity to the brink, you know, whatever).

4. Holes in your relationship

It's tempting to peek in his phone when he gets up to go to the bathroom if you've had suspicions. It's hard to resist asking him if he's asked his boss yet for the promotion you know he deserves. It's killing you that he's coughing when you've been bugging him to go to the doctor. Whatever recurring rough patches you have in your relationship, try not to use this time to smooth them out. Chances are it will only agitate the problem when it can simply be discussed on another day. Like, a day that doesn't involve the lingerie you bought for tonight, because that would be such a waste!

This mother of all date nights is not the night to remind him of how much more money you've spent recently on dinner for the two of you than he has, or how you're always the designated driver when you guys go out with friends, or how much you need him to chip in on the cleaning because you're the only one who seems to care about the sanitation state of your apartment bathroom. It's not the time to talk about who owes who.

6. The questionable likes and favorites on your significant other's social media pages

You post a sweetheart selfie of you and your boo, and you have some duck-faced Ashley you've never met liking it, and now that you realize it, she's liking/favoriting/luving/emoticon-ing everything he's tagged in and posts....

Ask a question, but don't get into accusations if he's clearly not responding to her. Let's be real, she's probably just a troll townie who's harbored a love for him ever since middle school. I mean, he accepts any friend requests sent his way (he's in a golf group on Facebook for god's sake, and he's never even watched the game before). In fact, stop, drop, and roll away from the phone. She and her fake tan aren't worth your time... at this time, anyway.

If you don't think you're going to remember these non-talking points, then take a more drastic approach. I recommend an extra layer of lip gloss and a table outside so that you'll be too busy fighting off wisps of hair sticking to your mouth every time you attempt to say something you're not supposed to. Good luck!