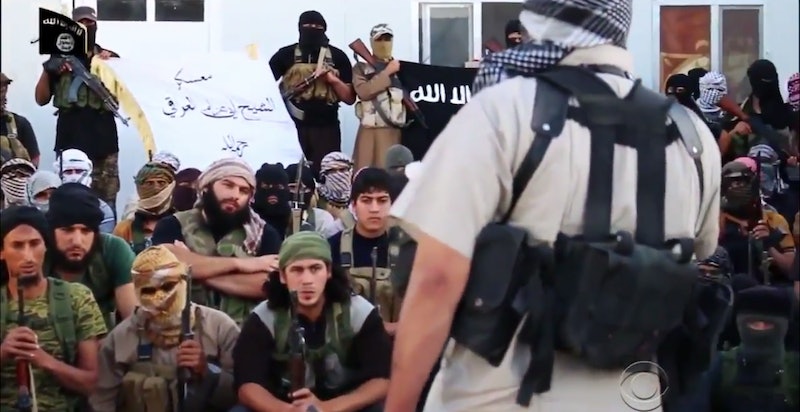 In the last year, as ISIS gained alarming momentum and power, tens of thousands of people have left home to join their cause in Syria. A large portion of these aspiring jihadists are Westerners and converted Muslims lured in by the promise of fighting for a cause and living under a pure Islamic caliphate. But, as one former ISIS fighter reveals, that promise does not always match the reality of ISIS. After growing disillusioned and escaping the group, Westerner Abu Ibrahim described his time with ISIS in an interview with CBS News. His revelations offer a rare glimpse into what life with the powerful terrorist organization is really like.

Speaking anonymously, Ibrahim sat down with CBS News correspondent Clarissa Ward to share what he experienced during his six months with ISIS. Ward first found the former ISIS member on social media and has been messaging with him for more than seven months. As she learned of his story, she corroborated it with other foreign members within ISIS to confirm its authenticity.

As a recent convert to Islam, Ibrahim wanted to live under strict Sharia law, so ISIS felt like a natural choice for him. However, after going to Syria and living under ISIS rule, he realized that jihad wasn't what he expected. And many others were likely to be just as disappointed, because actual life with the group is not as exhilarating as the recruitment videos make it out to be. Ibrahim told CBS News:

However, living under Sharia law is pretty much as one would imagine. According to Ibrahim, there were religious police, known as the Hisbah, who monitored and enforced Islamic code.

Their presence which may deter any thieves or any bad behavior but also look out for things like music isn't being played or women are covered up appropriately or that men are growing their beards.

But those were some of the least extreme examples of how Sharia law was enforced. Ibrahim also saw crucifixions and a couple stoned to death for committing adultery.

It was done publicly. There were many hundreds of people there who observed. While seeing someone die is not something anyone would probably want to see, having the actual Sharia established is what many Muslims look forward to.

When Ward asked if he considered that kind of punishment medieval and brutal, Ibrahim replied:

On the other hand, there were also relatively normal aspects of life with the militants, which was almost completely subsidized. Members were provided food, shelter, and even an allowance.

Initially it was approximately $50 a month. During winter it went up to $100 so people could purchase warm clothing or items for the house. They provided heaters for each house and for married couples they provide housing for them — furniture, the essentials.

Of course, all of that came with a price. Once you joined ISIS, Ibrahim explained, you could not leave.

The restrictions on leaving made it feel a bit like a prison in that respect that you couldn't leave the state.

And if he had been caught trying to escape?

Myself if I was caught I would probably be imprisoned and questioned.

He explained that the reason ISIS operated as a closed state was because they were incredibly paranoid about spies infiltrating their group, which they've discovered in the past. Just last month, ISIS posted a video called "Uncovering an Enemy Within," which purportedly showed a young militant executing two Russian men who had been accused of being spies.

Despite the strict no-leave policy, Ibrahim made his exit from the group. He told Ward that his growing disillusionment with the group stemmed from the numerous executions of innocent aid workers and journalists.

Some of the policies such as the beheadings of non-combatants, therefore innocent, some of those things I didn't agree with.

In fact, he had been tricked into thinking that ISIS' intentions were of a more humanitarian nature, an assumption that was brutally dashed.

My main reason for leaving was that I felt that I wasn't doing what I had initially come for and that's to help in a humanitarian sense the people of Syria. It had become something else. So, therefore, no longer justified me being away from my family.

While he opposed some of the violence, Ibrahim says that he had also just grown bored with life under ISIS. But six months is a long time, and Ward asked if there's anything he misses about living with ISIS.

I'll miss the friends I made and the brotherhood, but ISIS itself — no.