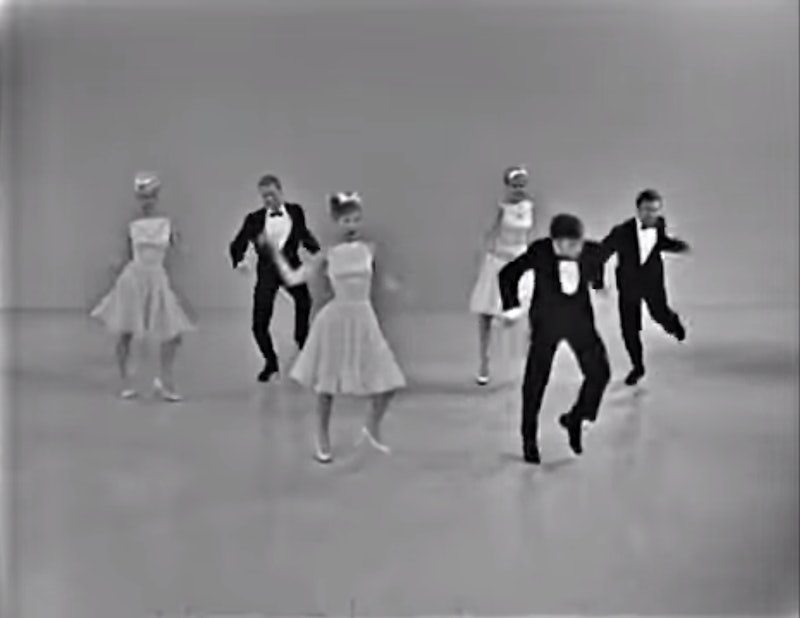 The 1960s sure was full of questionable trends: Donald Duck was widely-regarded as an acceptable sex educator; lava lamps existed outside shopping malls in actual homes as serious decor; foam domes was a popular bra style. However! Some cool developments did manager to take shape during this daisy-smattered decade. Namely, a whole bunch of dance moves that we need to coax out of retirement. We all know The Twist, and have suffered many a Bar Mitzvah where all attendees were ordered to jump into The Mashed Potato. But what about something as weird and greaser-friendly as a move called The Nitty Gritty? Sounds pretty intriguing.

Not that I get out to The Club very often (or really, ever), but last I checked, the current roster of popular dance moves is fairly limited to "trying to be Beyoncé" or "air-humping your partner(s)". Could this be, in part at least, thanks to a dramatic downturn in danceable attire? I mean, in the 1960s American Bandstand glory days, dudes dressed like they gave a damn in sleek black "movement" suits. Women donned pleated, wide-brimmed, flexible skirts and dresses. These kinds of get-ups beg to be twirled and shimmied in. My typical uniform of black leggings makes it look like I got lost on the way to my marionette performance and ended up on a dancefloor. Meaning, they are not nearly as cool-looking as the dance outfits of the 1960s. Guys, we have so much work to do. Let's start with viewing this video of The Nitty Gritty together to see if it inspires us:

Anyone else sensing strong A$AP Mafia vibes here? Seriously, remember A$AP Ferg's video for "Shabba"? Skip to 3:50 to see what I mean (or just watch the whole thing leading up to it...it's a great video).

OK, so A$AP Mafia is hip to The Nitty Gritty, albeit possibly via total coincidence. Judging by a cursory Google check, "dance moves" as a legit thing "young people" "do" is, unto itself, an idea of the past. Like, yes, sure, Beyoncé's "I woke up like this" handshake was a bit of a thing in 2013. And people sure loved mimicking that horrible, horrible Gangum Style giddy-up gallop thing. Again, though, do any of these moves have a place outside of mockery or a wedding reception dance floor? I'd like to see a world in which we hit the clubs to do more than hump strangers in the dark. Where's the creativity, skill, or coordination in that?