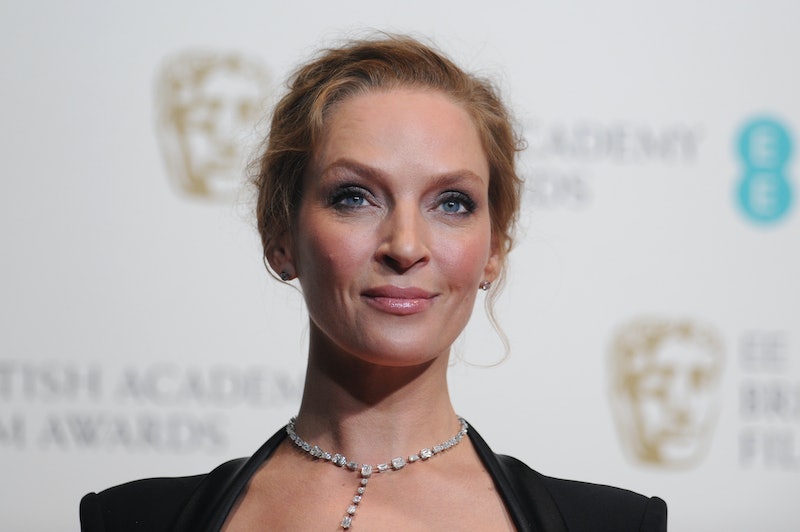 Seeing that Uma Thurman was trending on Twitter really threw me off on Tuesday morning. I just assumed it had something to do with her new television miniseries The Slap . However, that was not the case. Thurman is not the type of actress who usually makes headlines for reasons unrelated to her amazing work, so, seriously, why was she trending? Then I actually found out, and I was disgusted. People were making fun of Uma Thurman's red carpet look. That's right: one of the most celebrated beauties in Hollywood is getting cyber bullied on Twitter for wearing "minimal makeup" on the red carpet. Who cares if she's not wearing eye makeup? It's her face, not yours.

This is very similar to people bullying Renee Zellweger for her appearance in October 2014. Everyone hopped on the computer under their anonymous Twitter accounts to say terrible things about her face. To some people, Thurman and Zellweger may have looked different than however they are used to seeing them, but that doesn't mean people should automatically leap to judging them based on those new appearances. The sad thing is that women are consistently called out for both how they age and how they chose to deal with that, whether through cosmetic surgery or simply changing their style. No one should be shamed for their appearance or for their choices regarding their appearance.

It's not okay for random people to tweet about her face or for the media to take polls on what people think of her appearance. It's especially unfair when no one is talking about a choice of hairstyle or new outfit, when, instead, they're simply trying to incite a conversation about her face and unfairly analyzing whether or not she has had cosmetic surgery. It's already tough enough being a woman; I cannot imagine being a woman in the spotlight. As long as she is healthy and happy, Thurman has the right to do whatever she wants to feel good about herself, from what she wears to how much makeup she puts on to everything in between.

Could you imagine logging into Twitter to see thousands of tweets picking you apart, to see people posting side-by-side photos to compare your current and previous appearances? That's demeaning and hurtful. So Uma Thurman looks different. Who really cares? She's not hurting herself or others. Leave her alone. We should all make an effort to think before we speak, especially when it comes to social media posts. Our words can reach almost anyone and, once they are posted, they are out there forever. It all comes back to that classic adage: if you don't have anything nice to say, don't say anything at all.