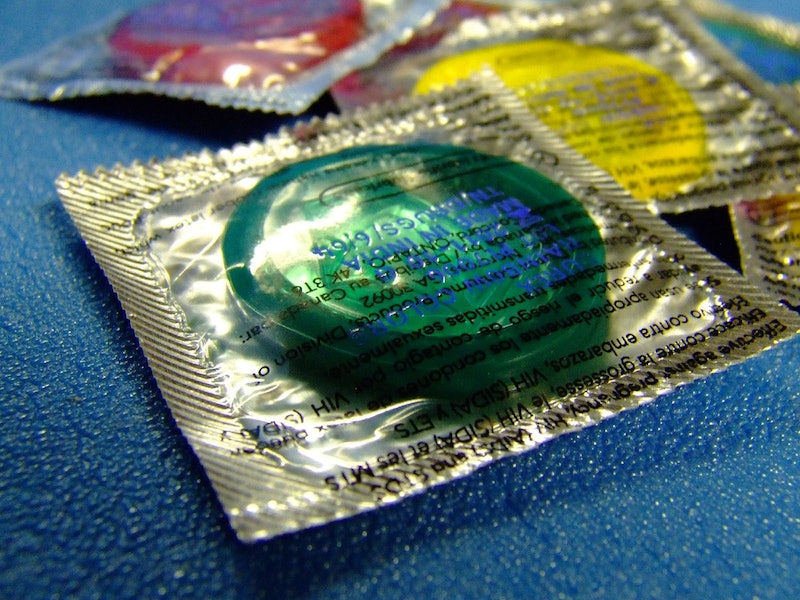 It was with the initial AIDS scare of the 1980s that the big push to teach safe sex through the use of condoms came to be what it is today. Condoms had of course existed long before that, actually dating back as far as the 15th century, but with the AIDS epidemic came the need to really reinforce just how important condom use was. It was then, in the late '80s, that National Condom Day was born. This year, appropriately enough, National Condom Day falls on Valentine’s Day. National Condom Day hopes to bring the importance of condom use to new generations coming up, especially the ones who were not around to witness the terrifying effect the AIDS epidemic had on the world.

While condoms are an essential and serious part of sexual health that we advocate using, the fact remains that they can also be pretty entertaining and funny. From latex allergies to the mismanaging of used ones to the inevitable fact that occasionally they just get lost inside you, most sexually active people have an interesting condom story (or five) to tell. Bustle asked our readers to share their condom-related tales, and here’s what they had to say.

“I hooked up with this really hot guy a few years ago, and because we were drunk, we ended up going through a few condoms — four to be exact. When he left the next morning, I managed to find three of the condoms, but the fourth was just MIA.

My first thought was that it was inside me, but after rummaging around, that wasn’t the case. A little while later, I took my dog for a walk and when he pooped I realized there was something bizarre in his sh*t. It was the condom. My dog had eaten the used condom. It’s a miracle he didn’t choke on it.”

“Well, I just found out last year that you’re supposed to pinch the tip to get air out. But the kicker is when I pitched my first tip, it wasn’t just the condom. A lot of apologizing followed.”

“Four years ago, I had incredible chemistry with this short man (not needed for the story, but whatever) who wound up having a really nice, good-sized penis. I had sex with him at the tail end of my period, knowing there was potential to stain the sheets.

Well, that didn't happen. But what did was [that] the remnants of the tampon I'd ripped out before our f*ck session came out on the condom in weird, clumpy threads. It almost looked like a yeast infection, but it obviously wasn't. He actually peeled one off (that had wound up on his thigh?) and handed it to me saying, 'I think this belongs to you.'”

“When I was 19, I took the virginity of a 21-year old UCLA basketball player. No one could have expected he was a virgin, because he's smoking hot. [On the third date] I learned he was a virgin, and he had a massive penis. Like, forearm penis. So big that it literally snapped the condom off of him like the incredible hulk.

Then, I just thought, oh, sometimes, penises snap condoms. No. I've been with a few well-endowed men since, and I've never seen anything like it.”

“I once dated a guy who thought it was funny to throw the used condom out my fifth-floor bedroom window. When I pointed out that it had landed on the roof of a Latin music store, he said that's why it was funny. Obviously, we didn't last.”

"The girl I was seeing off-and-on called me during an off time, and she was panicked. She says I need to come over, because I had to help her. I get to her place and she has this sheepish look on her face and tells me to sit down, at which point she grabs my hand and tells me that I need to look inside her vagina, because she thinks the condom is still in there.

I ask her what exactly am I supposed to do, and moreover, why does she think that I can do something she could do herself. She had two hands, both of them worked pretty good. At any rate, I said I'd take a look, because we're friends.

I'll be honest, my first inclination was to get a stick or piece of wire or something. I realized almost immediately that was wrong. One finger goes in, nothing. I say there's nothing there, but for whatever reason, she's not convinced.

Long story long, I went into the kitchen, found a pair of tongs, wrapped the ends in Saran Wrap, and I got it out."

"When I first started dating my now boyfriend it had been awhile since he had had sex. The first night we went to do it he, and I wish I was kidding, took a wallet from his pocket like a 15-year-old boy. But the condom had been in there so long (probably since he was 15) and when he opened the package it was so hard it could have been snapped in half. That was his only condom. We didn’t have sex that night."