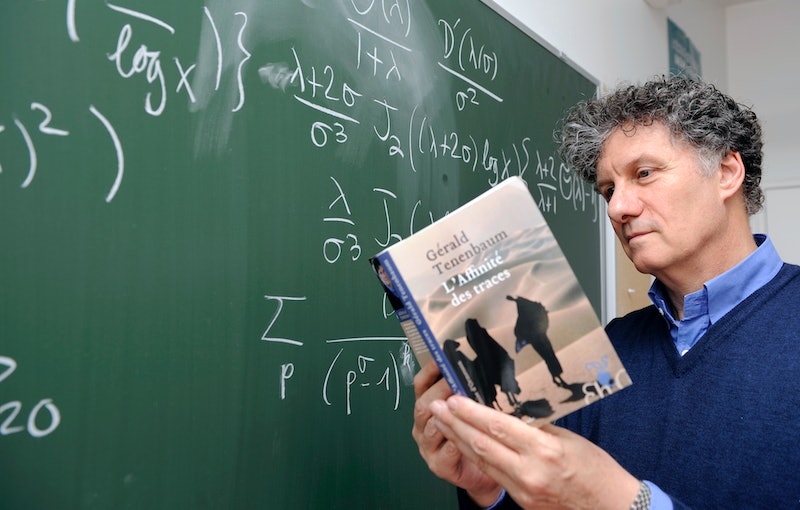 In case you needed more proof that sexism in academia is a real thing, this one's for you: A professor at Northeastern University visualized data from 14 million reviews on RateMyProfessor.com and created a really neat (if discouraging) interactive chart revealing gendered language in teacher reviews. The X axis of the graph shows uses of the word per million words of text and the Y axis shows the subject taught by the professor. Blue dots on the graph indicate male teachers, while orange dots indicate female. Basically, you can input any word and see if there is a clear gender difference in when it's used; for example, Maya Dusenbery from Feministing put in "genuis" and "bossy." Guess what happened? Yup — the results clearly revealed that the word "bossy" is used more frequently for women and the word "genius" is used more frequently for men. Unsurprising? Yes. Sad? Very.

I played around with the data a little more and found that other words with gender imbalances include crazy, insane, irritating, ugly, mean, smart, brilliant, sexy, and awesome. The first five are most often used for women; meanwhile, the last four apply more often to men. The interactive chart also gives you the extra option for searching a term and then selecting whether you want to see how it appears in only negative ratings, only positive ratings, or all ratings. Interestingly, the gender-related nature of some words change when you change the type of rating you want to see. The term "insane," for instance, is more frequently used in positive ratings to describe men and more frequently used in negative ratings to describe women. Let's face it: The world is really screwed up.

Here, take a look for yourself. This chart shows the frequency with which the word "insane" appears in all ratings:

Here's how it looks like for only positive ratings:

And here it is with only negative ratings:

If you want more information about how the chart works and what Professor Ben Schmidt did to visualize all this data, his blog talks about the methods and nuances put into aggregating all this information. Play around with the chart yourself here, but prepare to be a little disheartened.