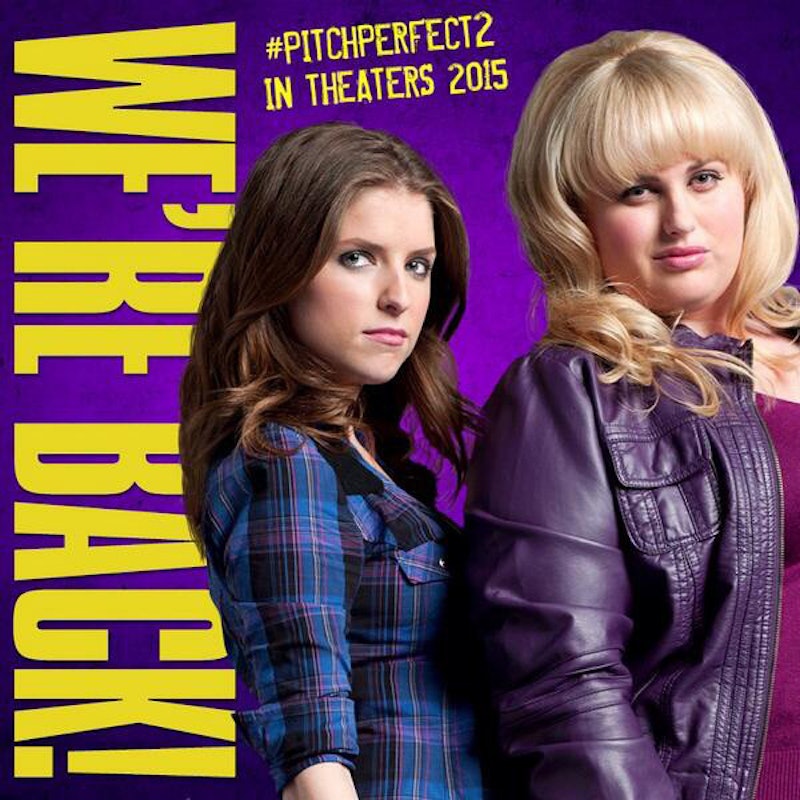 There are a lot of things I don't understand about myself, including the fact that I love Pitch Perfect. But really, who cares, because the Barden Bellas are amazing and Anna Kendrick is who I want to be when I grow up. And luckily, now, there's a second full-length trailer for Pitch Perfect 2, and their tagline sums up the movie just right: the world is about to get pitch-slapped. But even though each of the Bellas brings their own strength to the table, the Pitch Perfect 2 trailer proves beyond a shadow of a doubt that Fat Amy is the star of the show.

In Pitch Perfect 2, the Barden Bellas are back and bigger and better than they ever were before; they even perform for President Obama on his birthday, which is a huge honor, until Fat Amy (played by Rebel Wilson) comes out on a suspended harness singing "Wrecking Ball" and has a major malfunction, flashing the entire audience because she decided to go commando. Not cool! They're replaced by a European team who are charmless and actually pretty frightening, the battle has begun, hilarity and amazing acapella ensue. And even though they all work great as a team to bring the LOLs, Fat Amy carries them because she's the most intentionally and unintentionally hilarious member of the group. Here are the six moments in the Pitch Perfect 2 trailer where Fat Amy proves she's a cut above the rest.

Amy and the rest of the Bellas had grand ambitions for their presidential birthday performance, and it seemed like it was gonna go off without a hitch. Singing and swinging Miley Cyrus' recking ball on aerial ropes, Fat Amy is clearly the bravest and more daring of the group.

But when she flips right over and gives the audience and the leader a free world a NSFW shot (a bad day not to wear underwear), Amy still maintains her showmanship with a smile on her face. So beautifully framed against the huge American flag, I might add.

"I'm pretty sure I'M the hot one." If only I had one-tenth of the self-confident swagger that Amy does.

Proud To Be An (Australian) American

Locked in a battle of nations against the Europeans, the Bellas don't cower. But they know they have their critics out there. Ahead of their performance at the international acapella championships (you heard right), Amy pep talks her team: "They're gonna look at us and think, 'Why is the most talented one Australian?'" Never forget your roots girl, even though now you're on Team USA.

I feel a little weird saying this about a movie that's made up of primarily white girls, but the rap battle scenes are some of the best parts. And Amy is up and ready for it: when one of the Euros affronts her with "Poison" by Bel Biv Davoe (one of the greatest tracks of all time), Amy's not having it and hits him back with "What's the Scenario" by A Tribe Called Quest (another one of the greatest tracks of all time). Game, set, match.

A Little Something Extra For Her Fans

Amy's never afraid to give her gals a little squeeze to the delight of the audience. Anything for Bella fans!!

Pitch Perfect 2 comes out on May 15, which is way too far away.