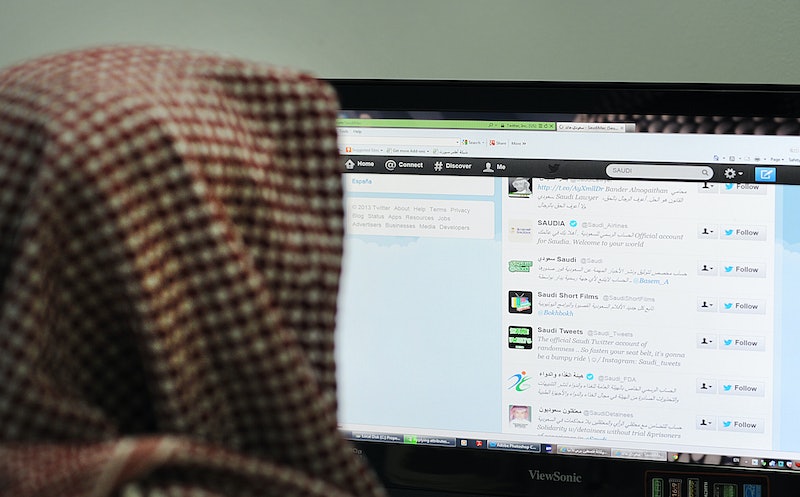 A few weeks ago, we reported on how sexism was making women mentally sick. It's possible we already have our solution: According to a new study, tweeting about sexism may help women improve their mental health and overall well-being. It seems like a paradoxical remedy, considering Twitter ends up being one of the sources of online sexism, but it just might work.

Published in the British Journal of Social Psychology, the study looked at how women felt when they talked about current gender issues online, in a private forum, or not at all. The researchers assigned 93 female college students to three different groups: using Twitter privately; using Twitter publicly; and not using Twitter at all. After three days of tweeting — or no tweeting, for that one group — the researchers gave the women a questionnaire about their current mood. Lead researcher Dr. Mindi Foster said in a statement:

We know women can be badly affected by experiences of sexism and that responding publicly can be stressful and risky. This study examined whether using Twitter to respond to sexism could be done in a public way without any negative effects to their well-being.

As it turns out, using Twitter to talk about what Foster described as "sexism in politics, the media and in universities" can be beneficial for women. Researchers found that the female college students who tweeted about these issues publicly saw an improvement in their mental well-being by the third day of the study.

Meanwhile, the groups who either tweeted privately or did not tweet at all did not show any changes in their mental health. Researchers concluded that "tweeting about sexism may serve as a collective action that can enhance women's well-being."

A recent study from the University of Missouri-Kansas City and Georgia State University showed the link between incidences of sexism and sexual harassment and women's psychological distress. We already know that women are much more likely to experience depression and anxiety than men, and that facing everyday sexism has a negative impact on a woman's mental health. So, this new study is a welcomed reprieve.

Although more research is needed, the researchers suggested that women who tweeted publicly had the greatest improvement in their well-being — and experienced reduced negative effects or feelings — because public tweets require "more cognitive complexity in their language" than private tweets. Tweeting about sexist issues might also help women because it's a "form of collective action," Foster said.

"We know that popular online campaigns such as EverydaySexism have empowered women to speak out and share their experiences," she added.