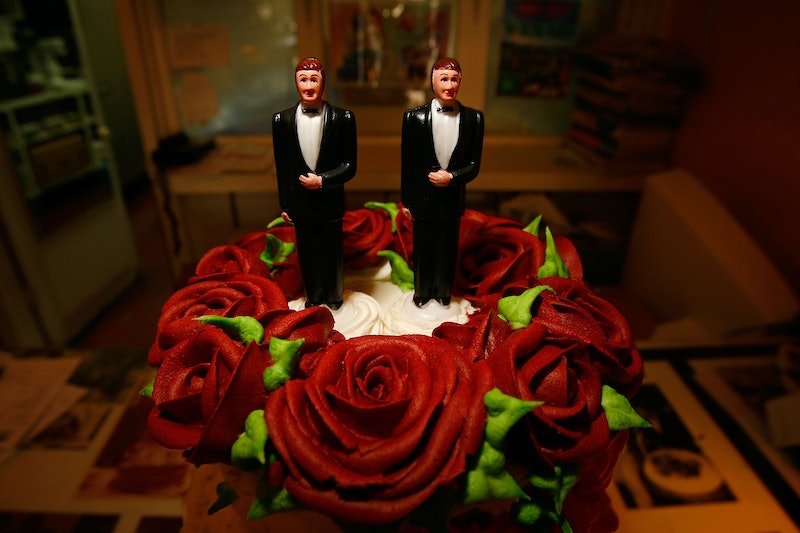 Monday was supposed to go down in Alabama's history books as a day of progress. Following a federal judge's ruling last month that struck down the state's ban on same-sex marriage, Monday was set to be the first day that same-sex couples in Alabama could finally marry. But instead of making new history, the state repeated the past.

In an incident that is being likened to Alabama's holdouts on both desegregation and interracial marriage, Chief Justice Roy Moore of Alabama's Supreme Court ignored federal orders and told the state's probate judges to not issue marriage licenses to same-sex couples. On Sunday evening, Moore issued an order saying, “Effective immediately, no probate judge of the State of Alabama nor any agent of employee of any Alabama probate judge shall issue or recognize a marriage license that is inconsistent” with the state's constitution, The New York Times reported.

Moore's instructions wreaked havoc on what should have been a joyous day. Because of Moore's blatant contradiction of the 11th Circuit Court of Appeals and the U.S. Supreme Court, state probates were faced with a tough choice: they could either follow Moore's orders or they could follow federal law. In the majority of counties, officials refused to issue same-sex marriage licenses and, in some cases, officials stopped issuing all marriage licenses for the day.

This isn't the first time that Moore has done something like this. As TIME reports, Moore – who some call the "Ten Commandments Judge" for his history of antics – has a long track record of defying federal orders. Over the last couple decades, Moore has ignored federal court orders to stop Christian prayers in his courtroom and to take a massive monument to the Ten Commandments out of the Alabama State Judicial Building.

Perhaps more important to note is that this isn't the first time that the state of Alabama has done something like this either. In 1963, Alabama Gov. George Wallace tried to stop the desegregation of public schools by blockading the door to the University of Alabama's auditorium. In 2000, Alabama became the last state to overturn its ban on interracial marriage. Their ruling came almost three decades after the Supreme Court ruled such laws unconstitutional.

However, as The Washington Post's Philip Bump points out, it’s an oversimplification of the situation to say that Moore's actions this week can be directly compared to Gov. Wallace’s 1963 blockade. Moore's defiance represents more than just the state of Alabama; his defiance also illustrates a larger pushback against just how far the federal government’s power extends into states.

But if the end results of Alabama's fights against desegregation and interracial marriage prove anything, it’s that positive change is inevitable. Much as Moore may try to stop same-sex marriage licenses from being issued, he can’t stop the wave of change that has already reshaped the country’s perspective on same-sex marriage, just as Wallace ultimately couldn't stop desegregation.