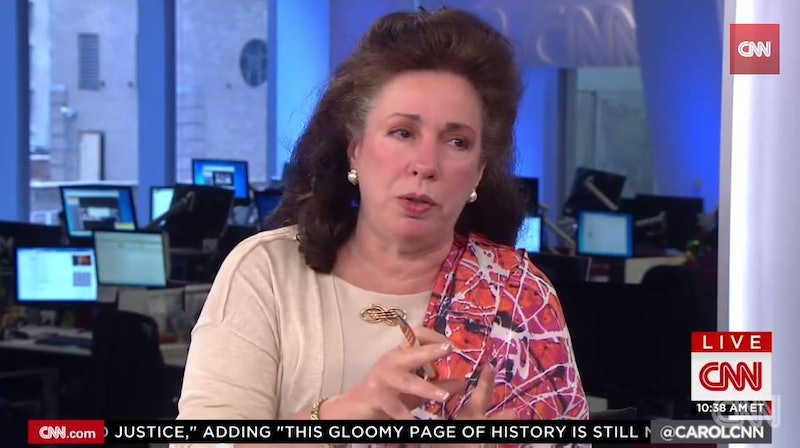 It's been almost two years since the Daily Princetonian published the Letter to the Editor that shot Susan Patton, known as the “Princeton Mom,” into the spotlight — but her former classmates have had enough. In a Letter to the Editor published on Sunday, the Princeton University Class of 1978 grad spoke out against Patton; in it, they address the troubling comments she made in December concerning rape and urges the University to distance itself from her.

During Patton's December CNN appearance, she raised alarm bells when she appeared to describe sexual assault committed by an acquaintance as “not rape,” but rather “a learning experience”:

“We're talking about nothing but rape on campus, it seems like, for the last several weeks or months, but I think what makes this conversation so particularly prickly is the definition of rape. It no longer is when a woman is violated at the point of a gun or knife. We're now talking about, or identifying as rape, what really is a clumsy hookup melodrama, or a fumbled attempt at a kiss or a caress … To me, that’s not a crime. That’s not rape. That’s a learning experience.”

Although Patton has since said that her comments were misconstrued, I think it's pretty difficult to misconstrue that paragraph. Its very phrasing suggests that in the good ol' days, rape was always clearly distinguishable due to the presence of a deadly weapon. It minimizes and dismisses the most common type of rape — that which is perpetrated by someone the survivor knows. Given that, according to RAINN, two-thirds of rapes and 73 percent of sexual assaults are committed by non-strangers… well, you can see how awful and damaging it is to call it a "learning experience" instead.

Columbia University student Emma Sulkowicz, carrying the mattress on which she was raped for "Mattress Performance/Carry That Weight."

These comments in particular proved to be the tipping point for the alumni who signed the Letter to the Editor. “Rape and sexual assault are violent crimes against persons of any gender,” it continues:

“It is particularly disturbing when college students violate the trust of people they know. The mix of social pressure, alcohol and drugs, misguided beliefs about entitlement and power, and unclear messages from peers about what constitutes appropriate approval for sex all contribute to this phenomenon. Rape survivors may have years of post-traumatic stress disorder, lack of trust in others, depression and anxiety; long-term effects can be exacerbated when the rape is committed by a date or an acquaintance. We know this first-hand — some of us from personal experience at Princeton and elsewhere and others from the experiences of our children and friends."

The alumni go on to acknowledge the fact that, like many colleges and universities, Princeton has been “struggling to find the right balance between the rights of the accused and protections for the victims.” At the same time, though, they believe that “for far too long the attitudes of the so-called 'Princeton Mom' have pervaded many campuses, even if not spoken as loudly.” They finish by calling for the University to distance itself from “this woman dressed in orange and black associating her out-of-touch personal beliefs with our alma mater”:

“We — along with many other alumni — see these views as outrageous and unworthy of being associated with Princeton. We ask the Princeton administration to continue its efforts to create a campus climate where all accusations of sexual assault are treated with the seriousness they deserve, and we invite those who share our views to raise their voices to join ours.”

UVA, the subject of the Rolling Stone story "A Rape on Campus."

According to the Washington Post, alums like Julie List, who helped organize the letter, received a variety of responses when they reached out to their former classmates for signatures. A lot of them added their names immediately; indeed, the letter garnered more than 100 signatures in a single day. Others, however, didn't: They thought the issue was “too complicated to just offer a blanket rejection of her views,” or actually agreed with her, or simply didn't want to give her any more publicity. This last perspective is something I struggle with myself: I don't want to draw any more attention to her. It seems like she thrives off of the idea of no press being bad press; as such, it doesn't seem to matter if there's a huge outcry against her harmful “advice.” As long as we continue to give her our ears, she'll keep shouting her message from the rooftops.

At the same time, though, I also firmly believe that the only way we can change the world is by addressing its problems head on. If we don't address Patton's statements — if we keep our mouths shut and hope that if we stop giving her attention, she'll simply go away — then we can't do anything to counter them. This, I think, is what List was getting at when she told the Washington Post, “Sometimes you just can't stay silent.” To stay silent is to accept it — and rape and sexual assault are not things we can accept.

There's a reason we're talking about rape and sexual assault so much lately: It's a huge problem. We have not yet satisfactorily dealt with it — not in terms of how we define it, not in terms of how we process it, and more. The only way we can finally get there, though, is by keeping the conversation going, and by keeping it productive. Patton's comments have the opposite effect: They're counterproductive, and they have the power to undo all the work that has been done thus far.

So, like the Princeton Class of 1978, I'll keep talking about ideologies like Patton's — but only to draw attention to how absurd they are. This is how not to help rape and sexual assault survivors. This is how not to prevent rape and sexual assault from happening. This “advice” is what we should not give, and what we should not follow. We're better than that. We're more human than that.

So let's do something about it.