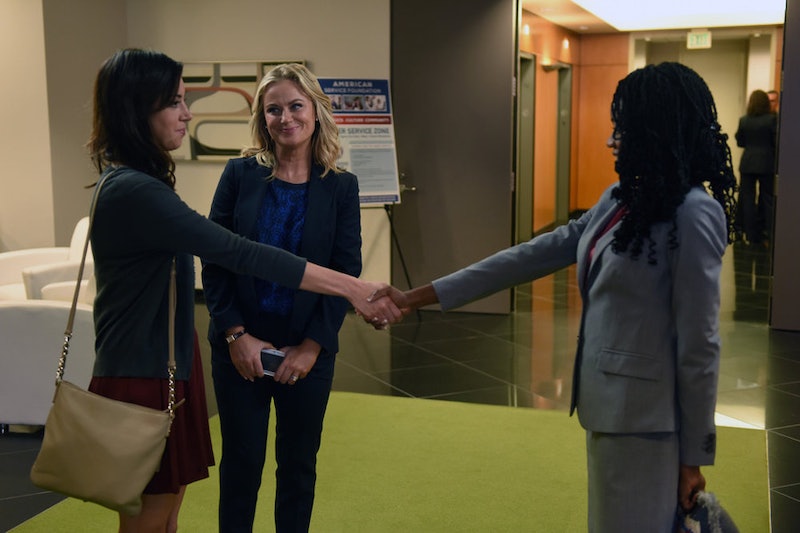 To think that April Ludgate started on Parks and Rec as an intern and leaves the National Parks Department as a government team member is pretty incredible. To say she was one of the least enthusiastic employees in Pawnee is a huge understatement, but she grew to become one of the hardest and most passionate workers the team has had, in her own April Ludgate way. So when the beginning of Season 7 of Parks and Rec revealed that April wanted to quit her current position with Leslie, it was only a matter of time until April told Leslie of her future plans, and Leslie freaked out accordingly.

Leslie doesn't do well with people leaving. It's one of the billion reasons to love her. In the beginning of the episode, April and Leslie set off to Washington D.C. where Leslie accepts a job in D.C. as deputy director of her department with the government. Meanwhile, Ron, Ben, and Andy set off to find April the perfect career outside of the government. They attempt to get April hired at the accounting firm Ben always quits, but Andy blows it.

Back in Washington, April finally opens up to Leslie about her hopes for her future. April tells Leslie that she quits working in the government with Leslie, as it isn't something she is passionate about. Obviously, this doesn't go over well with Ms. Knope. But after Leslie has time to think it over — and talk it over with Madeleine Albright! — Leslie comes to terms with the change, but not before April gets to really open up about how she really feels about Leslie.

In a heartwarming moment, April tells Leslie, "You turned me into someone with goals and ambition," which was so sweet and heartwarming that Leslie, April, and I got choked up. After saying she loves Leslie, April is whisked away by Leslie to a career center to discover what she is really passionate about.

It's there that we finally learn what April's dream job is, helping others discover what their career paths should be. But there's a catch. The job will require April and Andy to move to D.C., which might sound like a big change, but let us not forget Leslie also just accepted a job in D.C., so the gang will still be together!