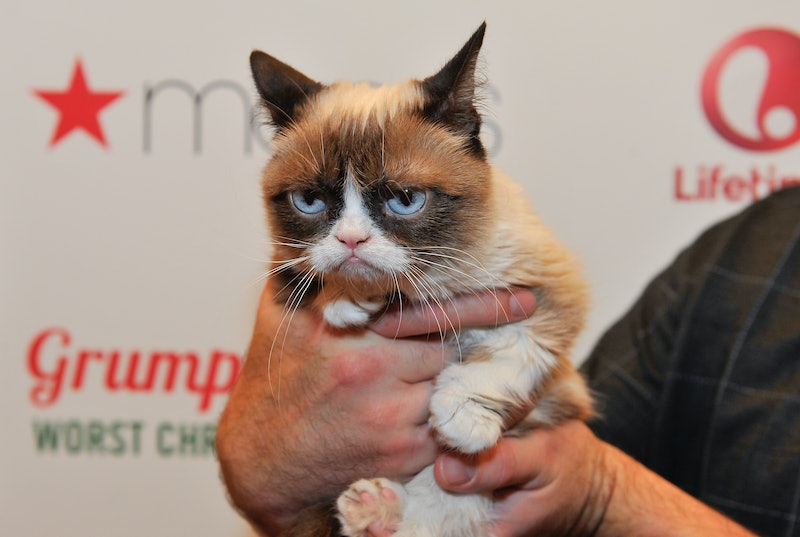 Remember that old joke that the Internet is just a series of tubes filled with cats? Well, thanks to Grumpy Cat, Lil’ Bub, Maru, and others, the Internet seems to be filled with talented felines — and yours could be the next famous Internet cat to win over the masses. OK, so maybe it's not that simple, but you never know until you try, right? Until a few years ago, it seemed like an impossible idea that you could turn your beloved household pet into a money making machine simply because they were super small, or had a funny face, or a weird meow. Now? You, my friend, could be sitting on Internet gold.

The impossible dream of turning your pet into a celebrity is now more of a reality than ever. Cats whose fame started on the Internet via YouTube or social media have been steadily growing in popularity all over the world, and now the web is saturated with them. Grumpy Cat, of course, has achieved more than any Internet famous cat before her by snagging endorsement deals and a Lifetime Christmas movie — both of which helped the frowny face kitty out-earn Oprah in 2014. And it all started with a single photo posted to Reddit two years ago.

I have two, beautiful cat children (don’t judge me) named Pumpkin and Lena, and it’s definitely an appealing scheme to try and turn them into an Internet sensation. And I think I’ve figured out how — wish me luck!

I mean, duh. Even if the cat is not technically yours — it could be your neighbor’s or your roommate’s or your mom’s — you can still share photos and videos of it. Of course, if said cat starts to gain a following, it’s easier to cash those checks if you’re the rightful owner.

2. Figure out what makes your cat special

Does your cat have adorably large paws? Does it stand on its hind legs and wiggle around? Does it fetch toys like a dog? It’s those types of things that will make your cat stand out. Grumpy Cat is a prime example of this. Her unique look sets her apart from pretty much every other cat on the Internet.

3. And if they’re kinda ordinary… go with Plan B

If you happen to have yourself an ordinary, sleep-all-day, sleep-all-night kind of cat (every cat is beautiful and unique, I know, but work with me on this), do something to make them distinctive. Dress them up in a shark costume and put them on a Roomba. Catch them when they make that strange meow at that really ballsy squirrel taunting them from the balcony. Get them a unique companion. Something that will make people laugh is usually what will also make them share your cat's antics with their Internet friends.

4. Remind your cat how much cat food costs

Every time your cat wants to sleep or some nonsense instead of take a picture or record a YouTube video, remind them how much their cat food costs. My boyfriend keeps telling me, “Cats don’t speak English, Emily” and “The cats aren’t human children, Emily” and other such garbage, but I know they understand me. That cat food isn’t going to pay for itself, Lena.

5. Set up your brand

If pictures of your cat get a few likes on your Instagram, get them their own. And while you’re at it, get them a YouTube and a Twitter and a Facebook and a website. You never know when another cat named Pumpkin will pop up. Snag all the good URLs and hashtags while you still can.

Maybe you were already posting the occasional cat photo to Facebook, or you posted a YouTube video like three years ago. Now, you have to start posting things every day… all day. My theory is, the more content that’s out there, the more likely it is that people will take notice of your adorable cat. And start to harass family and friends to share everything you post. If you posted something 10 seconds ago and your bestie and sibling and SO haven’t all liked it yet, send them a passive-aggressive text.

7. Tell the world your cat’s story

People may like your cat, but they’ll love your cat if they come with a really good story. For instance, my mom found Pumpkin one winter morning in a frost-covered field when she was only three weeks old. Pumpkin was the only one of her litter to survive after her mother was lost to the coyotes. We had to bottle feed her and act as her surrogate cat moms — you’re super into my cat now, aren’t you? You want to see Pumpkin succeed, and by succeed, I mean hit 20 million views on YouTube.

Your cat might not be famous yet, but they will be very soon, so you should get them used to the idea of being treated like a star. Pet them often, maybe give an extra treat here and there, and tell them how pretty and special they are. Make sure they know how much you love and value them, and they’ll be more inclined to stave off napping for a few moments while you put a bow tie on them.

More like this
Twitter Has *A Lot* To Say About The "Single Penalty”
By Sam Ramsden
Ashamed Of Your Screen Time Stats? Here's How To Change That
By Alexis Morillo
Learning To Love, Not Judge, The Lunchbox Wives Of TikTok
By Esther Zuckerman
How To Turn Off TikTok Profile Views So You Can Stalk Other Accounts In Secret
By Alexis Morillo
Get Even More From Bustle — Sign Up For The Newsletter
From hair trends to relationship advice, our daily newsletter has everything you need to sound like a person who’s on TikTok, even if you aren’t.