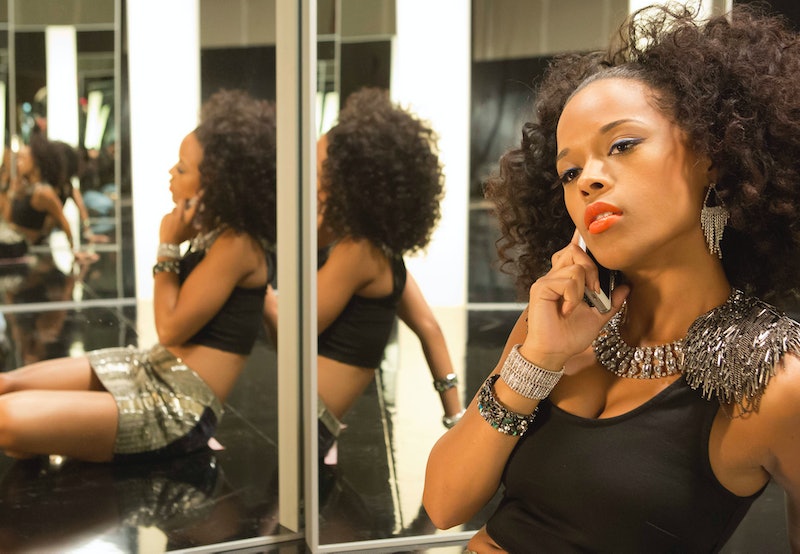 She may only be a pop star in the world of Empire , but Tiana Brown, played by Serayah McNeill, has made quite a splash. Not only has she started an on and off stage partnership with Hakeem Lyon (Bryshere Gray), but she also has her own secret lover, a woman named India. Sure, Hakeem also has his own secret girlfriend in Camille (Naomi Campbell), but on the show, the press was way more interested in Tiana's relationship. It's all part of Empire's grand plot twists and turns every Wednesday night. Since Tiana has two loves, I had to wonder if McNeill is dating anyone off screen, and after some digging, it doesn't look like she has a sweetheart in real life.

And if she does, the actress/singer is keeping it off social media and way quieter than "Takeem" is on Empire. What is evident from McNeill's Instagram and Twitter accounts is that she's living quite the glamorous life lately, with all her newfound success on the smash hit series. That means whoever she chooses as her partner from now on has to be pretty special and able to keep up with her crazy and adventurous life, as well as her amazing musical and acting talent. This newcomer can do it all.

Here are the three qualities McNeill's significant other better make sure they have.

If there's anything Tiana and McNeill have in common, it's that they both dress to the nines. McNeill's Instagram shows her in a variety of super classy and stunning outfits and dresses, along with her hair styled in a variety of different ways. Her S.O. better be able to measure up. I mean, this chick even ups her style game for meetings.

A Sense Of Adventure

She's based in Los Angeles, but McNeill has been jetsetting to the likes of New York City and Chicago, where she visited a class at South Shore International College Prep High School in January. From the red carpet with the Empire cast and nightclubs to church and the park, this on-the-go gal isn't slowing down for anyone. And life's only gonna get busier for the new star.

A Love Of Cute

Awww, look at that puppy. McNeill understandably has a weakness for cute puppies, kittens, and even baby turtles eating strawberries, because who wouldn't? Her future love better take note and make sure her affinity for cute baby animals is well serviced by a link to a Vine or two.