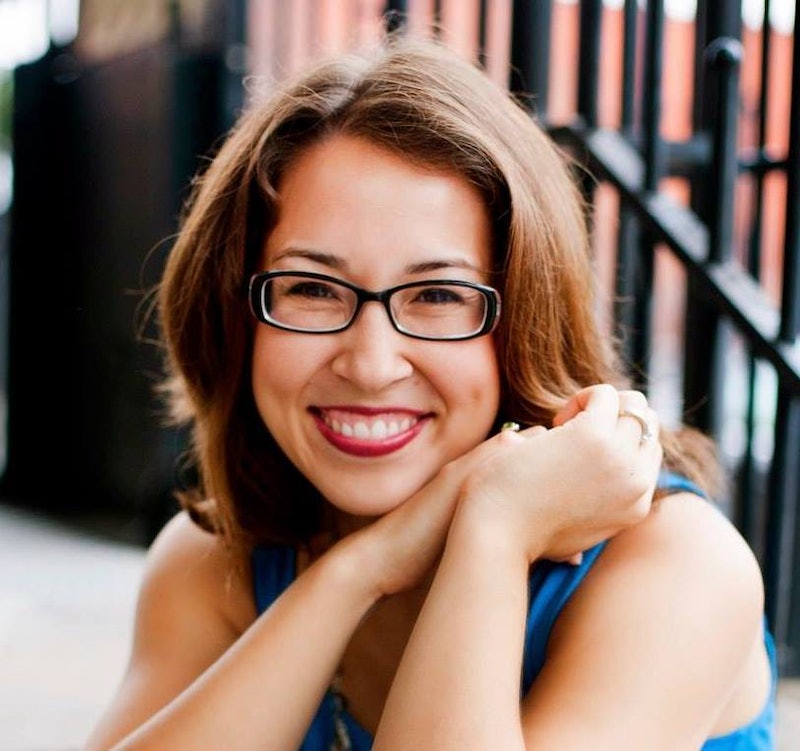 Margaret Atwood's iconic feminist speculative fiction novel The Handmaid's Tale is in a class of its own. But both women and men need more books like it that tackle the massive cultural issue of women's rights, even 30 years after Atwood's book was published. In fact, because it's been 30 years and women's rights are still being trampled on in our society, that shows these stories are even more important today. Enter: Kristen Simmons' young adult novel The Glass Arrow (Tor Teen).

If it's been a couple years since you've picked up The Handmaid's Tale (but of course, it's always worth another read), remember it centers around a society that has stripped women of their rights after a terrorist attack. Our protagonist Offred, literally "Of Fred," is a handmaid, a class of women that are owned by men in order to procreate.

In The Glass Arrow, women are too stripped of their rights after they become a sort of endangered species, scarce in population. Now, women are hunted and sorted into categories, similar to those in The Handmaid's Tale, before they are sold to men at auction. Virgins are the most valuable community, and are sold as "Unpromised" and given virginity tests before they can go home with the highest bidder. Then, often, once the man has received a male child from the woman or simply because he has become bored, he returns her to the auction house, where her value goes down and down each round. At the very bottom are the Virulent, those who have committed a crime and are marked with an X on their cheek. Often they cannot be sold and are forced to live selling themselves as prostitutes.

Our protagonist Aya wasn't born into this system like most of the rest of the women and young girls. Her mother escaped into the woods where they lived off the grid, hiding from men who hunted them. But after her mother passes away Aya is captured and given to an auction house, where she fights against being bought at every turn.

The Glass Arrow is action-packed and full of adventurous, gripping scenes, much more so than The Handmaid's Tale, but it is imbued with a whole lot of the same cultural and societal fears as Atwood's story. Both also prominently feature a type of religion. While the new society in Gilead of The Handmaid's Tale is structured on Old Testament ultra-conservatism, it's Aya's mother's beliefs in a Native American-reminiscent type of environmentalism that centers on singing to Mother Hawk. These religions drive motivations, both for bad and for good, in the stories.

Both Atwood and Simmons set up a near future that shows the path our society could be on.

And of course the major similarity between the two works is the focus on women's rights, particularly when it comes to power over their own bodies. Driven by worry about our current day disregard of women's rights to their bodies — oh, off the top of my head: the ridiculous idea of "legitimate rape," the debate around abortion in cases of rape, the fact that four in 10 teen girls report being coerced into sex acts — both Atwood and Simmons set up a near future that shows the path our society could be on. Just as Offred is owned by The Commander and her identity is stripped, Aya, known at auction as Clover, refuses to allow her body to become someone else's property.

My ma taught me one thing from the beginning: My body is mine. My own. No one else's. Just because somebody thinks they have rights to it, doesn't make it true. I thought I understood that before, but here, in this place, it's become more clear than ever how right she was. My flesh and blood--it's the only thing I own, and I'll defend it until I can't fight anymore.

And later, after she is captured and taken in by The Garden, where she (but really, her body) was auctioned off to a group of men.

The Garden trapped me like an animal. The Governess sold me like livestock at an auction. And the mayor and his family would have made me their whore. I am shaking with rage.

And like Aya, we should shake with rage, all of us. These stories should make us mad and should make us stand up for our rights and women's rights everywhere. That means both Atwood and Simmons have done their job. But both also set up structures that show us how standing up for ourselves can be more difficult than it may seem.

Atwood visited West Point to discuss The Handmaid's Tale after the novel was assigned to a graduating class. One of the cadets asked Atwood to sign his copy, saying he had read it twice.

He said he’d twice read The Handmaid’s Tale for classes. “You must know it better than I do by now,” Atwood said. “I haven’t gotten to the bottom of it yet, ma’am,” he replied. But he did have a question. He couldn’t help but notice that some of the worst treatment the novel’s female characters receive comes at the hands of other women.

And it's true. But Atwood gave some insight into why that may be, both in the novel and in our own society, as she climbed in her car to leave.

“That’s true,” Atwood said. “That’s how these things work. All dictatorships try to control women, although sometimes in different ways. And one of the ways they control any group is to create a hierarchy where some members of the group have power over the others. You get those people to control their own group for you.”...“That was a very good question,” Atwood said of her last petitioner, and climbed in.

The same women-on-women violence and hatred struck me reading The Glass Arrow. And I think I misunderstood it before reading Atwood's comments. In Simmon's novel, The Governess controls the women at auction because she has been given that power by men. And the "Unpromised" are despised by the second and third round girls because they get treated better because they can be sold for more. And everyone looks down on the Virulent because they are representative of what could happen to all women. Essentially, the girls in The Garden and in society at large are too busy competing with each other to rally together and fight the patriarchy. And that's just how the patriarchy planned it.

As Atwood proved in her West Point visit, these are the types of books that both men and women need to be reading. And Simmons has directed this women's rights message directly to the audience it best represents: young adults, the ones that will grow up in the society that they can help create. The Glass Arrow centers on such a crucial topic, but it's important not to dismiss that it's also incredibly suspenseful and fires on all cylinders of storytelling, making it not just a thoughtful read, but a fun one, too.