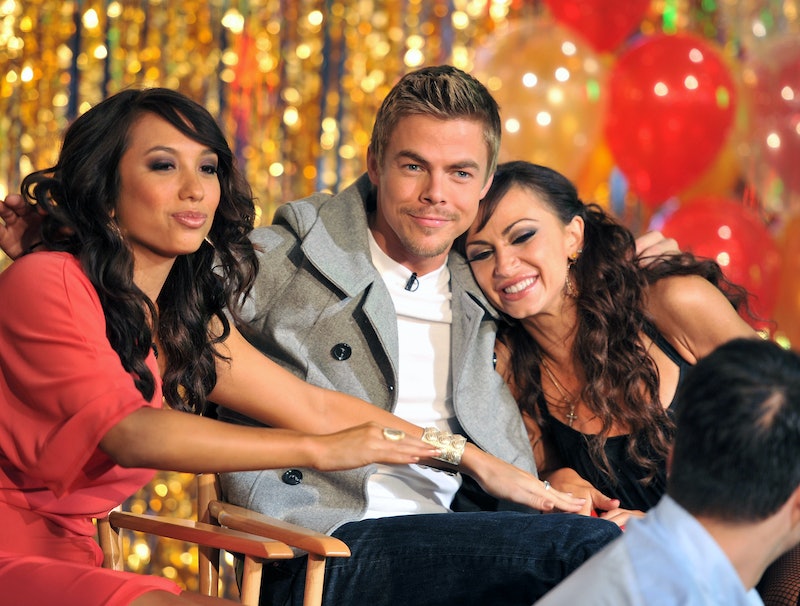 When Dancing With the Stars Season 20 premieres on March 16, it will be without three fan-favorite pros. But why are Karina Smirnoff, Derek Hough, and Cheryl Burke leaving the show? It's all because they have bigger and better plans ahead of them, and it doesn't necessarily mean they are gone for good. We found out that Hough and Burke weren't returning earlier this year when he announced his participation in The New York Spring Spectacular and she revealed she's starring on a new NBC show. Neither ruled out coming back for the fall season, so we may only have a few months without them. This will also be judge Len Goodman's final season, and he'll sit alongside judges Carrie Ann Inaba, Julianne Hough, and Bruno Tonioli, plus co-hosts Tom Bergeron and Erin Andrews. Smirnoff announced her departure from DWTS in an Instagram post on Tuesday, explaining that her newly-released memoir, We're Just Not That Into You: Dating Disasters From the Trenches, is the reason behind her maybe-temporary goodbye. Here's a snippet of what she wrote:

"Many of you have been asking if I will be back for season 20 of DWTS and I wanted all of my incredible family to hear it directly from me. After a lot of thought and prayer, I've decided to focus my energies on some other exciting endeavors including adding author to my resume. I have absolutely loved dancing for all of you for all these years and feel blessed to have been given a platform to put my passion for dance, choreography and creativity on display. DWTS has been a huge part of my life for the last 10 years and i will always have a special place in my heart for it."

The full lineup of returning pros was announced on Good Morning America on Wednesday, and it includes many returning favorites like Val Chmerkovskiy (but sadly not his brother, Maks, who seems to be gone for good), Mark Ballas, Tony Dovolani, Peta Murgatroyd, and Sharna Burgess. Kym Johnson, who left in 2013, is also returning, plus Season 19 winner Witney Carson, Emma Slater, Artem Chigvintsev, and Allison Holker. The cast also revealed some theme nights for the 10-year-anniversary season — yes, it's been around for a decade — including Disney, Latin, and Spring Break special. There will also be all-access cameras on a live stream, so it will be like Big Brother on Dancing With the Stars this year.