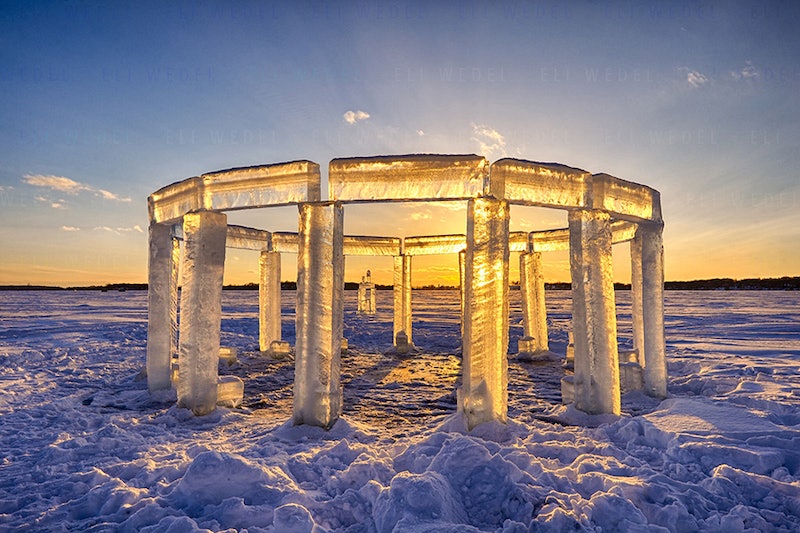 It's safe to say that most of us know without checking our bank accounts (insert cringe face) that we are currently not of the financial graces to book a flight to England, mosey on over to Stonehenge and take in the glory that is the prehistoric monument. But hey, if you happen to live anywhere within driving distance of Wisconsin, soaking in some culture just got a hell of a lot cheaper thanks to these five friends who built an Icehenge near Lake Mills, Wisconsin. It sits on top of an actual lake and is, true to its nickname, made entirely out of ice (which I imagine isn't hard to come by there).

The experiment began when friends Drew McHenry, Kevin Lehner, Quinn Williams, Alec Seamars and Patrick Shields decided to try out an antique ice cutter four years ago, which basically means they were ice harvesting badasses long before the likes of Kristoff from Frozen came along. In 2014, they attempted the same Icehenge feat, but had to stop when weather conditions prevented it. This year, it only took them two weekends to complete.

Honestly, I think their version is more stunning to look at than the actual Stonehenge. The way the ice reflects the light of the sun is mesmerizing, and it's only made more impressive by the fact that each of these pillars weighs a whopping 300 pounds, and the ones resting on top are 200. And that this is on top of a frozen lake. Basically these dudes accomplished more in their two weekends then I plan on doing in two years. Check out the pictures, or head over to state of many cheeses to see for yourself. (Don't worry, I'm pretty sure you have plenty of time before this melts.)