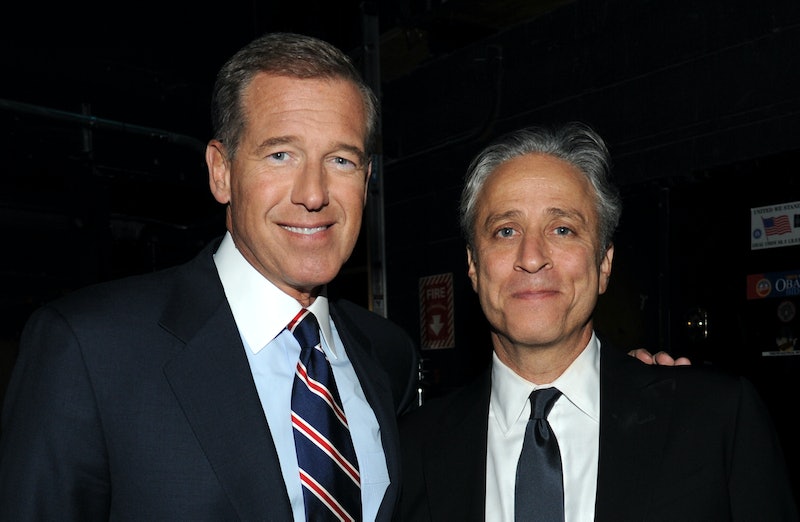 This week, America was left heartbroken with the news that Jon Stewart will be leaving The Daily Show sometime this year. Aside from dreaming about a Jon Stewart 2016 presidential run, there are many who still want to see Stewart on TV. On Wednesday, the Washington Post looked deeper into an idea that not only keeps the satirical host on the air, but also takes care of Brian Williams' epic predicament — Jon Stewart and Brian Williams should switch jobs. And given the two hosts' recent career choices, the idea totally makes sense.

The weirdly serendipitous timing of the announcements makes the swap suggestion feel natural — almost like destiny. On Tuesday night at 7 p.m., Comedy Central announced Stewart's resignation, and less than an hour later, NBC announced that it had suspended Williams for six months without pay. Almost immediately, the Internet started suggesting that Stewart take over at NBC Nightly News.

The crowd was a little less enthusiastic about making suggestions for Williams, but the Washington Post's Terrence McCoy offers some solid arguments for why the tarnished anchor could do The Daily Show justice.

It's really not much of a stretch to imagine Stewart as anchorman of a serious news program — I mean, people are seriously imagining him as president. A large portion of America's younger viewers get their news exclusively from The Daily Show, and according to a 2008 Pew Research poll, Americans listed Stewart as their fourth most-admired journalist and ranked him among the likes of Anderson Cooper, Tom Brokaw, Dan Rather, and, yup, Brian Williams.

In recent years, Stewart has actively ventured out of comedy and tried his hand at more serious projects. He wrote and directed the 2014 drama Rosewater about Iranian-Canadian journalist Maziar Bahari's 2009 imprisonment in Iran, a sentence prompted by Bahari's appearance on The Daily Show. The film received critical acclaim and showed the world what Stewart was capable of outside the satirical newsroom.

NBC certainly seemed to have taken notice. Last year, it approached Stewart about taking the very coveted position of hosting Meet the Press after David Gregory stepped down.

Elsewhere at NBC, Williams has also been making moves outside his usual genre, occasionally overlapping with Stewart. The NBC Nightly News anchor frequently likes to show his more comical side, from multiple crowd-pleasing appearances on 30 Rock to his semi-regular gig slow-jamming the news with Jimmy Fallon on both The Tonight Show and previously, Late Night With Jimmy Fallon. And between 2003 and 2013, Williams made 22 appearances on The Daily Show.

Williams even hosted SNL, a task that one would not normally expect a serious news anchor to take on. That's because, according to New York Magazine, Williams "wants to be a late-night comedian." An NBC source told the magazine that Williams even lobbied to take Jay Leno's Tonight Show spot a few years ago and has been getting chummy with comedic giants for a reason.

He traded on being Nightly News anchorman-war-reporter to ingratiate himself with Jimmy, Lorne Michaels, and Jon Stewart.

Now that Williams is temporarily out of a job — and income — perhaps it's time he turned tapped into his comedic side again. When the whole world is laughing at you, maybe the only way to come out on top is to be the one telling the jokes.