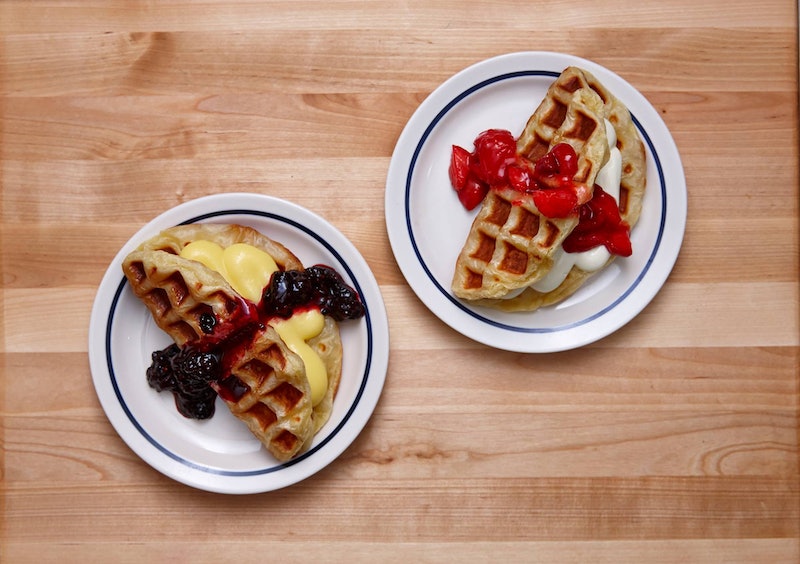 And for IHOP's next trick, it will be taking a croissant and pressing it in a waffle iron. I'm not kidding: The new IHOP “Criss-Croissant” has done to waffles what Dominique Ansel did to doughnuts. I'm also not kidding when I say I would totally eat that, because that sounds delicious — even if I'm not by nature a huge IHOP fan. It's not that I don't like breakfast foods — on the contrary; I adore them — but if I'm going to have diner food, I'd rather have diner food: The kind you can only get from that place down the block from you that's been there since the dawn of time.

In any event, though, I do have to give the pancake chain credit for coming up with something that would definitely inspire me to pay them a visit. “Criss-Croissants” involve “waffulized” croissants — that is, croissants that have been smashed between the heavy iron jaws of an industrial waffle maker — which are then stuffed full of some ridonculously sweet-sounding filling. Options include lemonade cream with blackberries and sweetened cream cheese with something that is, in essence, strawberry rhubarb pie filling. True, we may all be getting a little bit tired of the whole Frankenpastry trend…but I'd still give this one a shot.

As Eater points out, Criss-Croissants (jump, jump!) aren't the first strange and unusual breakfast food IHOP has shilled in recent months; in September, it released the kraken — er, a waffle-cheesecake hybrid, which doesn't sound nearly as delicious as a waffle-croissant hybrid. You'll have to act fast if you want a Criss-Croissant, though; they'll only be available until April 5.

In the meantime, though, I've also been inspired to see what else might be worth jamming in a waffle iron. How about giving one of these options a try?

A sandwich goes in; a…something…emerges. A waffle sandwich? A wafflewich? A sandaffle? Something resembling, but not quite, a panini? Whatever. If you don't have a sandwich press, I think a waffle iron is a perfectly acceptable substitute.

One of my favorite barbecue places does this thing where they slice their hot dogs in half lengthwise, then grills them. I don't know why, but it makes them taste so much better than regular hot dogs (and I already love me a good hot dog, sooooo…you do the math. And think up all the double entendres that go along with it). I would image you can accomplish something similar with the aid of a waffle maker.

Sure, it'll be a smashed, but who cares? Because pie.

This suggestion could go one of two ways: Either you put the raw bagel dough in the waffle iron and see what happens, or you slice a fully baked bagel in half and essentially grill it on the waffle iron. I'm admittedly more interested in finding out to what the first option might lead, but who am I kidding? I'll take either.

Come to think of it, maybe a pizza pocket might be a better choice — something more akin to a calzone. That way, you wouldn't have to deal with all that cheese getting stuck in the waffle grid's tiny little crevices.

Crepe batter in and of itself might not make for a very satisfying waffle — but what if you make your crepe, then press it in your waffle iron? And what if you filled it with Nutella and bananas or something first? Droooooool.