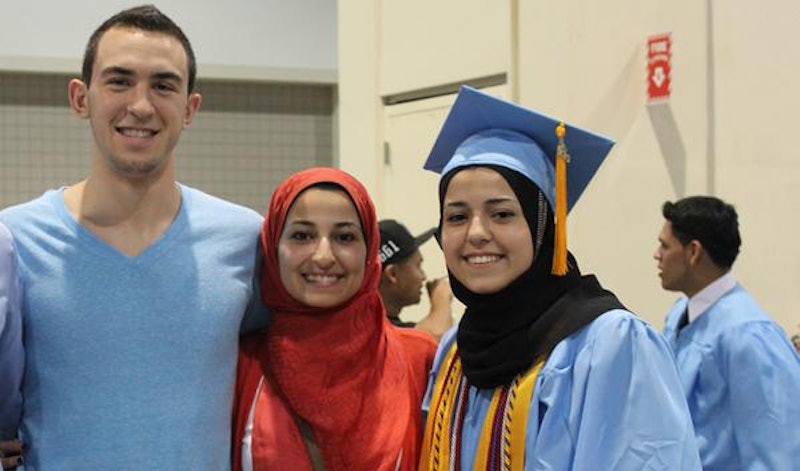 The shooting on Tuesday night that left three Muslim college students in Chapel Hill, North Carolina, dead sparked outrage, and not just because it was a horrific murder that senselessly cut short three lives. The media coverage — or lack thereof — of the incident has left the nation even more frustrated. Some biased reporting, and otherwise avoidance of the story by some outlets, has prompted many to take to social media to remind everybody that #MuslimLivesMatter too.

On Tuesday night, 46-year-old Craig Stephen Hicks was arrested for the first-degree murder of newlywed couple Deah Shaddy Barakat, 23, and Yusor Mohammad Abu-Salha, 21, and Abu-Salha’s sister, Razan Mohammad Abu-Salha, 19. The shooting occurred at the condominium complex where Hicks and Barakat and his wife lived. After a preliminary investigation, the Chapel Hill police issued a statement that they believe "the crime was motivated by an ongoing neighbor dispute over parking," but they're not ruling out the possibility that the shooting was hate-motivated.

The shooting has all the makings of a hate crime. The three victims were Muslims and ethnically Arab; Hicks is very vocal about his opposition to religion on his Facebook page, which uses an Atheists for Equality logo as his profile picture.

When it comes to insults, your religion started this, not me. If your religion kept its big mouth shut, so would I. But given that it doesn’t, and given the enormous harm that your religion has done in this world, I’d say that I have not only a right, but a duty, to insult it, as does every rational, thinking person on this planet.

The Abu-Salha sisters' father, Dr. Mohammad Abu-Salha, told Newsobserver.com that he has no doubt the shooting was fueled by religion and culture.

It was execution style, a bullet in every head. This was not a dispute over a parking space; this was a hate crime. This man had picked on my daughter and her husband a couple of times before, and he talked with them with his gun in his belt. And they were uncomfortable with him, but they did not know he would go this far.

Despite this, several media outlets have skirted the hate crime possibility while playing up the parking dispute. Fox News published a report on Wednesday titled "Parking Dispute, Not Bias, Triggered Triple Murder, Say NC Police." First of all, that's just wrong. The police hadn't drawn any conclusions, so the headline is more than a little misleading and irresponsible.

Even if the parking dispute is determined to be the official motivation, this tragedy needs to provoke a much-needed discourse on the discrimination against Muslims in America. The collective dismissal of the subject reflects the nation's dismissal of an entire demographic of people. And once again, frustrated citizens have had to remind the rest of the country that these lives matter. Many have taken to Twitter using the #MuslimLivesMatter hashtag, and their messages are powerful.

The current mood in the country is reminiscent of the days following grand jury decisions on the Michael Brown and Eric Garner cases, when the nation was reminded of our society's deep and prevalent social injustice. Just like the #BlackLivesMatter movement, the #MuslimLivesMatter message reveals an entire portion of the population that's been rendered powerless and voiceless. Because that's exactly what chalking up the shooting to a parking dispute is — telling the victims, their families, and any Muslim who's ever experienced discrimination that they don't matter.