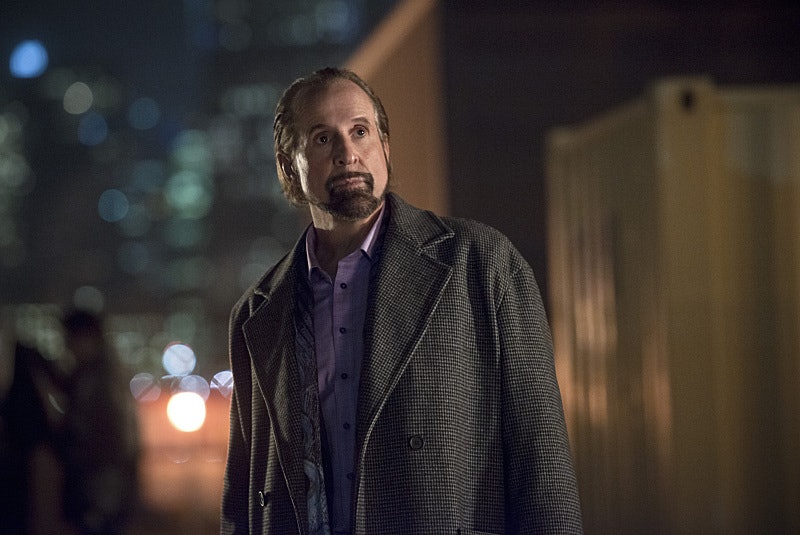 The way I see it, Starling City villains are kind of like weeds. Just when you get done taking care of one big bad, another one pops up in its place. (How this town still has so many residents I'll never understand.) And Wednesday night's "Canaries" episode will be no exception. Peter Stormare returns to Arrow as the villainous Vertigo (aka Werner Zytle), who took up the mantle of Starling City's main drug distributer after the death of his now-deceased predecessor Count Vertigo (Seth Gabel). But don't let the similar name fool you. These are two completely different characters with two entirely different agendas.

While The Count's drug made its users feel as though they were in excruciating physical pain, Stormare's Vertigo has since tweaked the serum to also include an added fear element into the mix. Basically, upon injection the victims see their worst fears come to life (very similar to the technique of Batman's nemesis Scarecrow). And unfortunately, this deadly drug has already found its next target… in Laurel. According to the episode synopsis, Vertigo will give Laurel a full dose of the fear-inducing toxin, which will force her to come face-to-face with none other than her dearly departed sister, Sara Lance.

Granted, this isn't the first time we've seen our vigilantes fight these side effects before. If you recall, Oliver faced a similar challenge during Season 3's premiere when he too was injected and hallucinated fighting himself. (Those double identities will get ya every time, you guys.) Oh, and let's not forget that Vertigo was responsible for making Oliver and Felicity's first date go up in flames (literally). He put a tracking device in Oliver's Arrow suit and bombed the restaurant they were in. So really, we have him to blame for our Olicity woes. (What a MONSTER!)

So now that this big bad is once again terrorizing the town, what could this mean for Team Arrow and the series in general? I have a few ideas…

Let's face it — it's only a matter of time before Laurel discovers that Thea killed Sara (unbeknownst to her, course). So the fact that she's about to come face-to-face with her sister (hallucinated or not) it's bound to bring up everything that happened that night, which could lead to further digging and inevitably the actual truth. Granted, it's technically Merlyn's fault, but it'll definitely cause further strain between Oliver and Laurel. Who knows, it may even make this canary decide to fly solo.

An Abduction Will Take Place

It wouldn't be a true episode of Arrow if human lives weren't in jeopardy and Vertigo's return presents the perfect opportunity. Perhaps Felicity will get taken and make Oliver realize how much he can't be without her, which finally leads to that romantic reconciliation we've been hoping for. Is this wishful thinking on my part? Probably. But, hey, it's only fitting that the guy who drove them apart would be the one responsible for getting them back together. Plus, we all remember what happened to the last person who threatened Felicity's life with Vertigo.

Spoiler alert: The Count died. Speaking of which…

Oliver Breaks His "No Killing" Rule

Now that Merlyn is training him to fight Ra's al Ghul to the death, Oliver may decide to start making even more exceptions to that "no killing" rule he put in place, especially if innocent lives are on the line. Something tells me this would do nothing to improve his already rocky relationship with Felicity, but it would certainly make for an interesting character development. (Don't worry, Ollie. I'll still love you.) I guess we'll just have to wait and see how it all plays out.