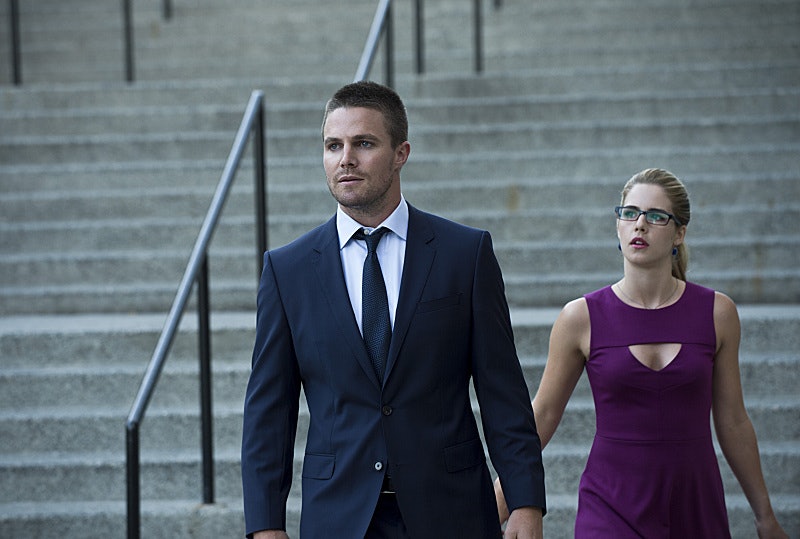 Well, that could’ve gone better. As promised, the Arrow Season 3 premiere delivered a first date between Oliver Queen and Felicity Smoak, proving once and for all that it pays to be patient. (Or if you whine about something enough you’ll eventually get your way.) But regardless of how this glorious moment came about, the important thing is that it actually happened. Right? Given how the date ended up going, now I’m not so sure. I mean, when the restaurant that your dining in ends up exploding right in the middle of your date, it kinda puts a damper on things. Granted, you want there to be fireworks and everything, but this is taking it one step too far.

It started out nicely though. After five months of successful crime-fighting, Oliver decides it's time to start looking for a life outside of his vigilante mystique, so with a little nudging from Diggle, he works up the courage to ask Felicity out to dinner. (Also, I think a nervous Oliver may be my favorite Oliver?) The problem is, a new villain with a familiar name, Vertigo, has different plans for our green-hooded hero. And by plans, I mean death. He has his goons plant a tracking device on Oliver's jacket during a run-in right before the date, thus leading to the inevitable BOOM. And while luckily neither of them were seriously injured, it left Oliver with some serious doubts regarding his future — especially in regards to Felicity.

As usual, he blames himself for the incident and broodingly takes it as a sign that he's losing focus in his attempt to, you know, have an actual life. He may not be able to live the life he wants after all, which becomes all the more clear after he finds himself injected with Vertigo's latest formula that shows people their worst fears. Oliver saw himself — something I'm sure Freud would've had a field day with. (I wish my fears were that attractive.) But Oliver takes this to mean that he's afraid of what would happen if he allowed himself to be Oliver Queen in lieu of the Arrow.

Felicity tries to convince him otherwise, but this guy's stubbornness is almost as sturdy as his abs. Oliver is officially shaken, leaving his relationship with Felicity on pretty rocky ground, at least for now. And now that Brandon Routh's Ray Palmer is in the picture (they already have the flirty banter thing going on), I feel this Olicity romance is already over before it began. (Sad face.) So the one big question on everyone's mind is now: Will there be a second date? There better be. But if not, at least we were given this amazing moment to remember them by…