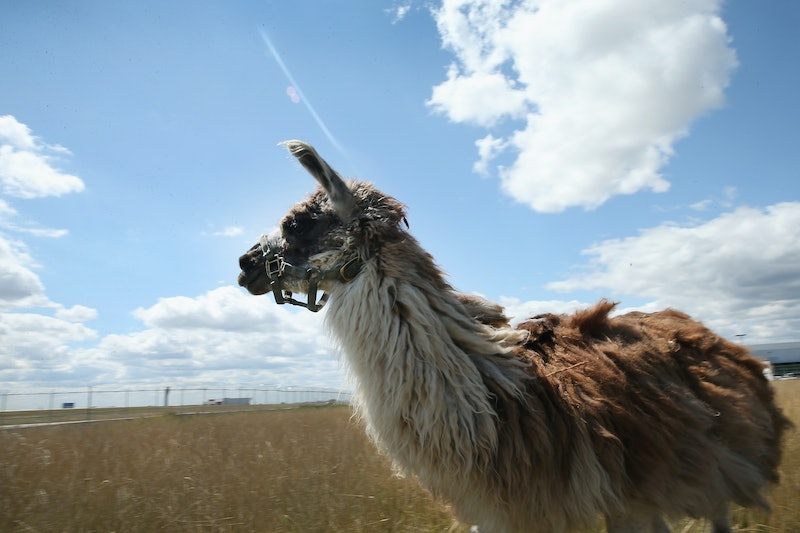 Of the many trends that make less than no sense from Birkenstocks to baggy harem pants, Vogue's latest pick may be the most baffling yet. Vogue has deemed llamas the next It animal and therefore the next big trend, leaving readers to scratch their heads in bewilderment. Vogue broke news of its adoration with a Valentine's Day spread entitled "Llamas & Pajamas," which, to anyone who has a passing familiarity with the brand, adheres to the company's obsession with animal alliterations (see "The Cat And The Flat" from March 2014).

Vogue's shoot took the crew to Woodmansee Farms in upstate New York, where 23 llamas and a host of other farm animals had the distinct pleasure of posing with several dashing male models. However, the obsession is far from a one-time phenomenon. Vogue also posted a feature on the most amusing llama memes as well as a piece entitled "Llamapalooza" regarding epic llama photobombs.

Archive Editor Laird Borrelli-Persson insists that the infatuation has more to do with the plush fur llamas contribute to fashion and their (somewhat dubious) statuesque, photogenic nature, but the llama fetish still appears to come out of left field. Perhaps snakes, donkeys, or guinea pigs will be next on the hot trend docket.