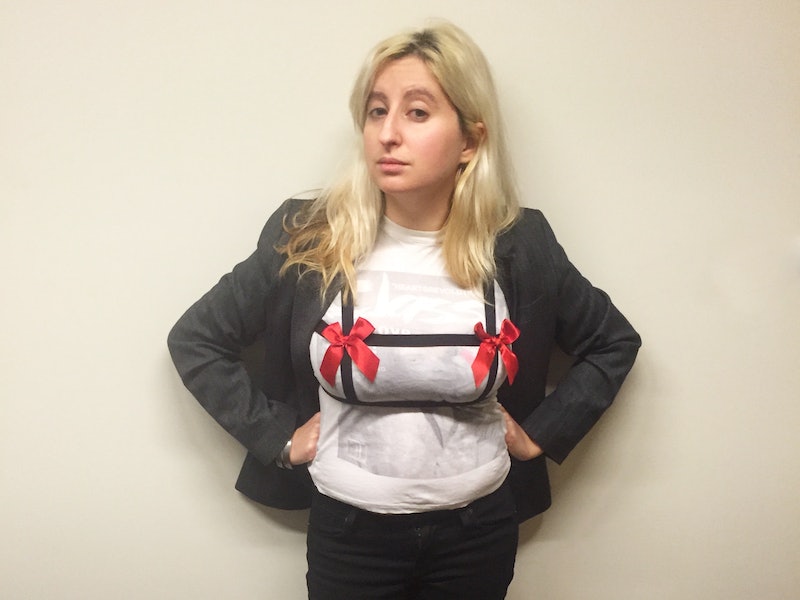 Each Valentine's Day, ladies are bombarded with advertising and fashion spreads that suggest that wearing extremely complicated lingerie with weird snaps and buckles all over is the only way to properly communicate our sex and love-related feelings to our loved ones. Similarly, if your partner is a lady, you're bombarded with advertising and gift guides that suggest that the only way to make a woman feel truly loved and cherished on Valentine's Day is to purchase her some lingerie with so many holes cut in it, she's not sure which one is for her arm and which is for her boob and she eventually just gives up in exhaustion.Despite these many ads and gift guides, you have probably resisted purchasing these insane undergarments, because you are a sensible person who enjoys knowing which is the arm hole and which is the boob hole. And yet. Has there not always been a little part of you that wondered, as you purchased yet another sexy-but-sane Valentine's negligee, what life might be like if you went for the diamond-covered cut-out bra that came packaged with its own matching vinyl thong?Well, as my Valentine's Day gift to you, I test-drove four of the most complex, unnecessary-seeming lingerie get-ups that I could find. So please, read on before you impulse-purchase any bra with any of the following words on the tag: "Cherry," "Eros," Party," "Fantasy," "Sexxx". Because the only fantasy you're going to have in that thing is imagining how you're going to get out of it.

1. Weird Bra With a Ton of Elastic Straps

This get-up came packaged with a pair of panties that appeared to be made from a set of jogging headbands hastily sewn together, in a pattern that basically made them look like a cage for your vagina. I mean, I guess your vagina has been very naughty, and needs to go to vagina prison? Or your vagina is really into jogging or crafts or something, who knows.

In the complete get-up, I felt like Leeloo from The Fifth Element, after she had fallen on very, very hard times, and was working at some sad intergalactic version of Hooters (presumably called "Space Hooters.")

In Action: My boyfriend found the outfit very promising at first, but as we took it through a test drive, we noticed that the bra part slipped around willy-nilly no matter what I did, popping my breasts out left and right. I spent most of our sexual encounter trying to center the red bows of the non-bra over the middle of my breasts, and as a result, was left with wildly chafed nipples. The constant boob flopping and re-centering distracted him as well, and he eventually requested that I take it off.

Pros: Initially, this outfit makes you feel like an exciting, dirty Christmas present.

Consensus: The panties (not pictured in here, because they are in the laundry, because I am not an ANIMAL), and any similar strappy panties, might make a good investment, as long as the strap material is soft and not too tight. But steer far away from any strappy cage bras, unless you want to feel like your breasts possess space age power to save humanity/ destroy Gary Oldman.

My boyfriend and I struggled for about 10 minutes trying to find the neck hole, only to realize that somehow, in the time between when I had taken it out of the box and the time I picked it back up off the kitchen table, part of the bra had somehow snapped. I fixed it with neon pink duct tape, as you can perhaps see in the above picture. I'm still not sure I ever got it on correctly (while in use, it's supposed to look something like this). When we took this picture, I couldn't even seem to organize it so that there were a correct number of holes.

In Action: The bra came with a set of fake diamond handcuffs, which puzzled me at first — until I started trying to move around in the bra, and realized that you had to stand absolutely still while wearing it or the entire thing would explode off my breasts, dooming me and my boyfriend to step on shards of sub-par sex bra diamonds for weeks. So I put on the fake diamond handcuffs, and tried to just kind of lay still. Our sexual encounter in the bra went about exactly as well as you might imagine one where one party was literally trying to not move at all. My boyfriend noted, "The fake diamonds actually kind of hurt to touch, and they are everywhere above your waist, so it is pretty much impossible not to touch them." Also, apparently they pulled my boobs in opposite directions while I was lying on my back, which might work for your purposes, but which I did not personally enjoy.

Pros: Kind of cool-looking, in the 30 seconds before it broke.

Cons: Impossible to move in; assistance is required to put it on; it somehow broke again in another spot after I took it off and put in on a chair.

Consensus: Might be good for some kind of sex game where one of you stands completely still (one based on the 1987 Kim Cattrell film Mannequin?), but otherwise: naaaaah.

Longline bras originated in the mid-twentieth century, as a kind of combo bra/corset that covers much of the stomach below the breasts, running to just above the navel. Though modern longline bras exist in forms slightly less punishing than their old-timey predecessors, retro lingerie companies still manufacture authentic longline bras just as your grandmother may have worn them, though they're sold to some degree as fetish wear (which is probably not why your grandma wore them)(maybe)(I'm sorry I brought up the idea of your grandma wearing fetish wear; how do we get out of this conversation?)

Just in case you can't tell from the above photo, this bra is ENORMOUS, with seven separate hook-and-eye closures:

I definitely needed help getting into it, but even with both my boyfriend and I working on hooking it up, we still had to do the ol' middle school "hook it in the front and then turn it back around" maneuver.

Pros: Comfortable; easy to put on by complex lingerie standards; great for anyone who's partner has some kind of rockabilly/ '50s fetish.

Cons: Might look too much like a regular bra to do much for those without a rockabilly/ '50s fetish.

Consensus: Depending on what your boo is into, this might not strike them as anything out of the ordinary; but if they have any formative sexual memories tied to the slumber party scene in Grease, I say, go for it! This one was the most fun for me personally (probably because I have formative sexual feelings tied to Grease that I still haven't completely processed).

This skirt came with a garter belt I purchased, and I was initially pretty confused by it. Why did I need a special weird skirt to have sex in? Wouldn't it be restrictive? If I felt moved to have sex while wearing a skirt, didn't I already own plenty of skirts that didn't look like they were cut to fit an American Girl doll?

My boyfriend, who is a rare individual who posses encyclopedic knowledge of both women's clothing design and hardcore pornography, explained its appeal thusly: "Because it's so short, it doesn't get bunched up or look weird if you have sex while you're wearing it; it still looks good. It basically just stays in place." And why would you want to wear a skirt that looks like it's made out of a very prissy 5th grader's pillowcase while you bang? "It's just, you know...cute. Girlish and cute."

In Action: I didn't feel like I got a very clear look at it myself, but by all reports, it stayed in place and did not get bunched up during The Most Sacred Act of Lovemaking.

Pros: Does not get bunched up or stuck between your butt cheeks or anything weird like that.

Cons: Am I wrong in thinking that this kind of looks like the bedspread in Stephanie Tanner's bedroom? Ah, well, I guess that's for me and my therapist to deal with.

Consensus: Putting this on and keeping it on is definitely low-effort, and if it gets your partner's rocks off, sure, why not? It's cheaper and more reasonable than having your pubic hair crafted into some special celebratory shape (heart, lightning bolt, bat signal).

Complicated Valentine's Day lingerie is less about actually being functional for sex, and more about showing that you put in some effort. "Look, honey!" they all seem designed to say "I still care enough about you to make myself physically uncomfortable" — which, as well know, is the basis of long-lasting love. And so on that front, all of these get-ups succeeded. But I think, as actual sexual enhancement materials in and of themselves, these outfits didn't do much.

So don't feel any pressure to encircle any of your genitals in weird fake gems this Valentine's Day. This day isn't about fancy bells and whistles; it's about the real you, and I'm sure your lovah will appreciate your body however you present it to them. I mean, seeing anyone naked in any context is still pretty exciting, right?