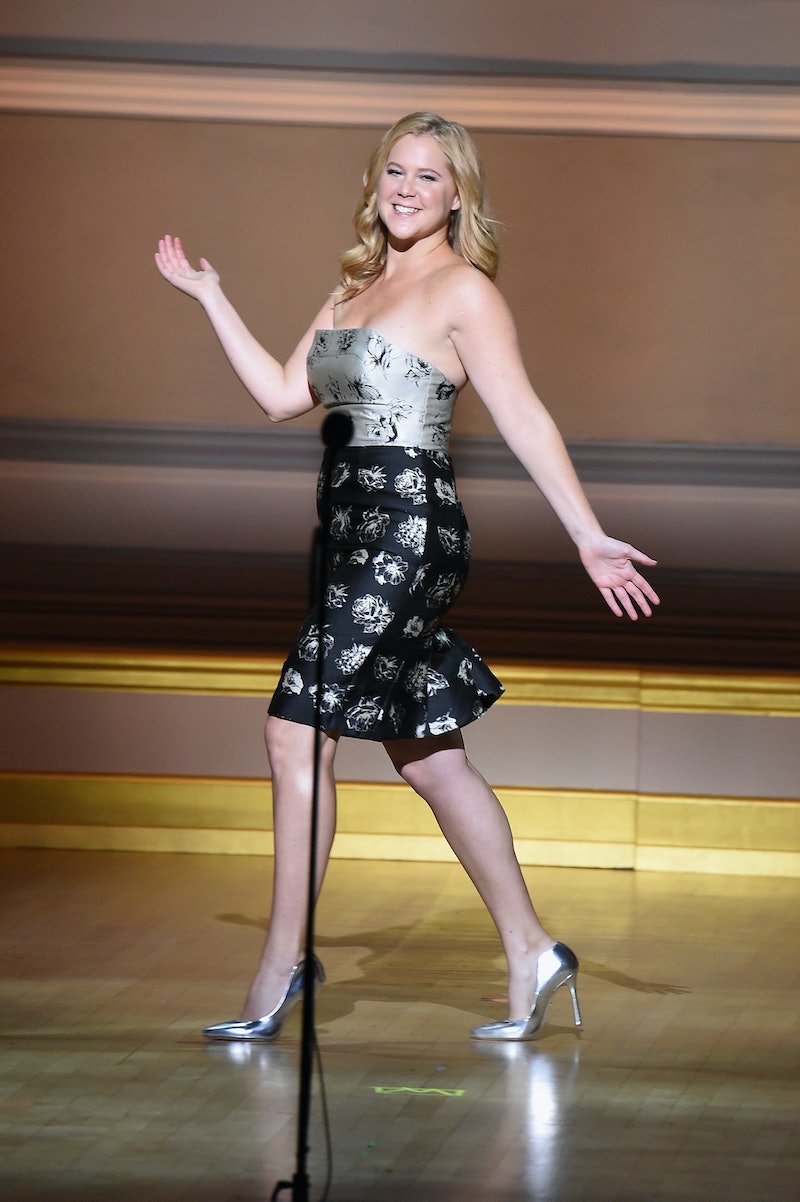 Amy Schumer has done it again: Not only has she gifted the world with one of the best sketch comedy shows in history, Inside Amy Schumer , but now, with her new movie Trainwreck (produced with Judd Apatow), Schumer has given the world an amazing, anti rom-com movie too. In the new trailer for the movie released on Wednesday, we see Trainwreck is the story of a single woman named Amy, played by Amy, who was taught from an early age that monogamy is "unrealistic" by her father after her parents' divorce, and internalizes that mantra to the fullest.

Twenty-three years later and living in Manhattan, Amy still doesn't give a crap about finding the "one": instead, as she says in the trailer, "I'm just a modern chick that does what she wants. Last week, it was this guy." In fact, she says goodbye to a whole barrage of cute dudes because she just wants to bang and be done with it and then go on to slay at her job at a men's magazine.

Of course, there's the "twist" that drags Trainwreck into rom-com territory — she's assigned to write an article on a sports doctor played by Bill Hader who she falls for, which horrifies her. Still, this is Schumer: The film looks genius, and I could not be more excited to see it when it's released July 17.

Until then, though: Here are 10 moments from the trailer that make me even more excited about Trainwreck than I thought possible (bonus: did you know Tilda Swinton is gonna make an appearance?!)

We know that Amy's sex life is bomb as hell, as she says goodbye to a whole bunch of guys with a smile on her face that says, "we're never going to see each other again." But for those that aren't picking up her vibe, she so kindly spells it out for them: One guy in a tight tank top asks her to be his date to a Saturday thing, and Amy says: "I can't do that, because like, we're never going to see each other again." Also, she's morning-after drunk when she spits this hard truth. Beautiful. Use 'em and lose 'em!

We see Amy coming home to her apartment after a night of meaningless sex; for some it's a walk of shame, but she's totally unphased. "What happened, did church get out early?" she's asked by a street lurker. But what the hell does she care? She just laughs it off.

Even though we know that eventually, Amy will wind up with someone, that doesn't necessarily mean she's gonna change her mind on marriage. As a member of the "I Never Want to Get Married And That's OK" club, I was screamin' at the scene where she's making fun of her sister's husband's bland sweater: "You dress him like that so nobody else wants to have sex with him? That's cool," Amy says. If married women can rip on single women, they better be able to take the heat from the other side.

Wine In a Box

... at the movie theater. If you've never had wine from a box or champagne from a soda can, you really haven't lived.

A Hot Mess, But OK With It

One: we've all struggled to get a shirt off. But for some reason, rom-coms and sitcoms use this trope to represent for some reason the woe and despair that is a single woman's life, when really sometimes our clothes are just traps that we can't get out of. And Amy's voiceover over this scene is perfect: "Before you judge, you should know, I'm doing fine. My friends are awesome, my apartment's sick, and i have an amazing job at a men's magazine." Get YOURS, girl.

If There HAS To Be A Love Interest...

If There HAS To Be A Bromance B-Plot...

LEBRON AS BILL HADER'S BFF ALSO MAKES ME HAPPY. Because he watches Downton Abbey, and he's adorable. Kind of a shame that he's the token black friend, but I'm excited to see LeBron onscreen. In a cute sweater.

When In Doubt, Drink

I know some people have idyllic, romantic first dates when they're looking for love in all the wrong places and then they suddenly find it, but let's be real: that is not common. This is what most of my so-called dates look like: getting supremely drunk with a dude to combat my nervousness and also so I can feel charming. Extra points for Amy doing sake bombs, because no one can really look attractive when doing them. It's an ugly business.

"I spent the night at the doctor's last night," Amy tells her best friend Vanessa Bayer with panic in her voice. "You never spend the night," she replies with equal panic. It's great to see a movie where the female lead is the one opposed to a monogamous, conventional relationship and is actually pretty freaked out when she starts to have "Feelings" for a man. I've been there. Everybody stay away from me!

Vanessa Bayer is the best friend! If only she were my best friend. She's totally supportive of/ shares in Amy's lifestyle. When sports doctor calls Amy, Bayer is freaked: "Why is he calling you!? You guys JUST had sex. I'm calling the cops." That's a ride or die friend right there.

Trainwreck will hit theaters on July 17.

More like this
Keke Palmer Shares The Sex Of Her & Darius Jackson's Baby
By Jake Viswanath
Who Is Allison Williams Dating After Her Divorce? She’s Engaged With A Child
By Jake Viswanath
The 'Scream 6' Trailer Shows Off Hayden Panettiere's Return & Ghostface In NYC
By Jack Irvin and Jake Viswanath
Jennifer Coolidge Hunted For Jewels & Lashes In J.Lo’s Hotel Room
By Jake Viswanath
Get Even More From Bustle — Sign Up For The Newsletter
From hair trends to relationship advice, our daily newsletter has everything you need to sound like a person who’s on TikTok, even if you aren’t.