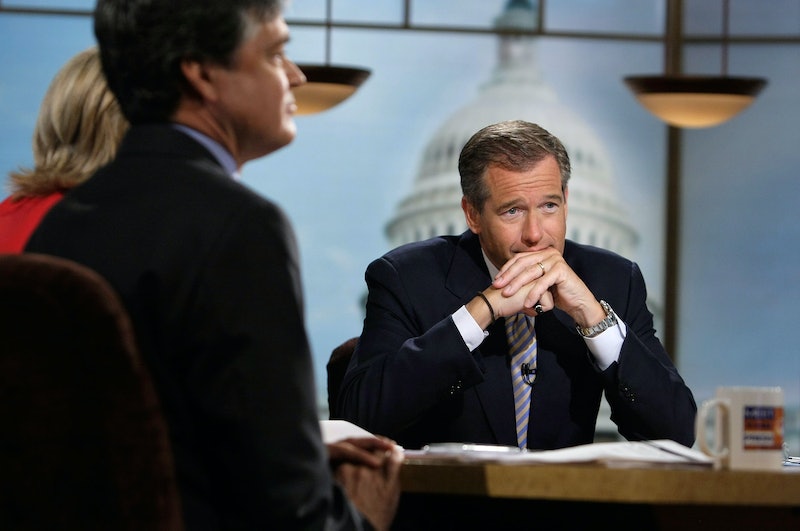 Embattled journalist Brian Williams was formally suspended from his chief anchor post at NBC Nightly News on Tuesday, following a staggering fallout from an investigation into his allegedly falsified stories from the Iraq War, Hurricane Katrina, and more. NBC executives suspended Williams for six months without pay — stopping short of firing him — though it's still unclear if Williams will ever return to the network that made him one of the most respected news anchors in America. But what does "suspended without pay" look like for Williams, who was also one of the highest paid news personalities on American television?

Considering his extraordinary pay grade, Williams won't be pinching pennies anytime soon. Bloomberg Business reports that Williams has been bringing home $13 million a year from NBC, though some news sources, including the Los Angeles Times, place his annual salary at $10 million. According to the website Celebrity Net Worth, Bloomberg says, when Williams first signed on as the chief anchor NBC Nightly News, his salary was $8 million per year. Not long after, NBC upped his annual paycheck to $10 million, then increased it to the estimated $13 million in 2014.

Those figures are astounding — especially if you're currently a journalist slogging through low-paying gigs — but they're not so out-of-line for NBC. Williams' Nightly News predecessor, Tom Brokaw, received a base salary of $8 million per year when he anchored the popular news program, according to a 2001 article from The New York Times.

Hadas Gold of Politico reports that the next six months will cost Williams at least $5 million (or $6.5 million, if his estimated $13 million salary is correct). Considering that Celebrity Net Worth estimates place his current net worth at $40 million, it's really just Monopoly money at this point.

Still, that seems to be a lot of money on the line — and a hefty cost for lying. In a memo sent to NBC staff members earlier this week, NBC News President Deborah Turness called Williams' alleged fabrication of an Iraq War story "completely inappropriate for someone in [his] position."

And with his return questionable, this might be a complete career-ender for Williams, who began his broadcasting career at KOAM-TV in Kansas. Former NBC News executive Bill Wheatley told CBS Washington:

When he comes back on the air, it will be up to Brian to demonstrate to his viewers and colleagues that he deserves their trust.