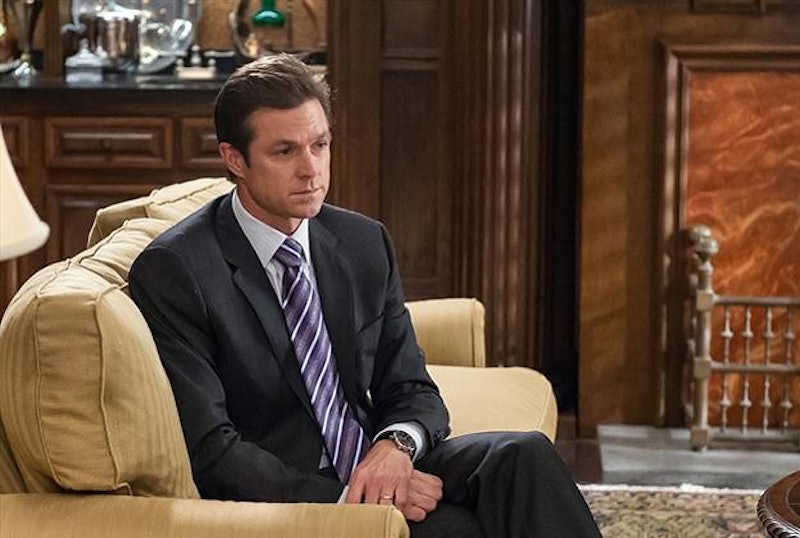 After weeks and week of waiting on baited breath for one of the most soap operatic story lines on ABC's Nashville to finally get interesting, it happened. On Wednesday night's episode "I've Got Reasons To Hate You," Jeff Fordham finally blackmailed Teddy into signing his daughter Maddie to Edgehill as their newest artist behind Rayna's back by using his information about Teddy sleeping with a prostitute against him. It seems pretty obvious that Teddy will buckle under the pressure as he would never do anything to jeopardize his career, even if it is for the sake of his family, or ex-wife in this instance. And one thing is for absolute certain, Rayna will not stand for this kind of blatant betrayal of her wishes. But also, can Teddy actually sign off on Maddie's contract considering he's not her real father? And will Rayna jeopardize the privacy of her daughter's life by rehashing the news Deacon is her father just to get her out of her contract? Obviously that news is a matter of public record after the family's reveal on GMA, but would Rayna make Maddie relive the controversy over again, but this time to a worsening degree?

Wow. What's to come of this nonsense? We're looking at a lot of tension and anger between Rayna and Teddy, with Teddy definitely not revealing his reasons behind allowing their 15-year-old daughter to start up her music career. And we're almost definitely looking at tension between mother and daughter as Maddie will be angry that her mother isn't supporting her dreams, and Rayna will likely use the fact that Maddie probably can't actually sign a contract if both she and Deacon — Maddie's real father — don't sign off.

I have to admit that in the case of Maddie starting her career this young, I agree with Rayna. She may have a great voice, but if it actually works out that she gets signed to Edgehill without Daphne, she's going to sound similar to many other solo acts out there. Before Jeff pulled out his blackmail card, Teddy was right in saying that the reason Maddie and Daphne are so special is because they are amazing together as a duo. In real life, it's so impressive to see Lennon and Maisy Stella (the girls behind Maddie and Daphne) perform amazing covers together and clearly they know that the duo is more memorable than just one sister in the spotlight.

It would be heartbreaking to see Maddie try and climb her way to the top by herself, for it to only fall on top of her thanks to her contract actually being null and void. Or even worse, if the contract sticks, Jeff will insist on Maddie singing songs and having an image that he has to approve. There's a reason Rayna left Jeff and created her own company. Rayna will probably be completely enraged that Teddy would not only sign their daughter to a record label early but also at a label that she does not own. How will it look for Maddie to be with Edgehill and not Highway 65, especially considering Rayna's already shaky public image and the fact that Maddie, Daphne and Rayna just performed at the Bluebird together with a song they wrote together.

Teddy's problem is that he doesn't think through his actions. From the start he should have realized that Jeff was conning him, or at least he should have realized it when he met the prostitute that he later fell for and with whom he had a secret fling even after the reveal. He continues to get himself in this ridiculously stupid situations and won't go to anyone for help. If he would just talk to Rayna about his idiotic actions, she'll definitely be disappointed (and probably disgusted) but in the end she might try and find a way to help him.

But likely he won't do the mature thing, the right thing, and reveal his mistakes, and that's what will ruin him in the end. I think it's inevitable that Teddy loses his mayoral seat, or at the very least, he won't get re-elected and will be disgraced in the public eye. And of course, that's the last thing his children need, especially if Maddie is trying to start a career. Way to ruin everything Teddy.