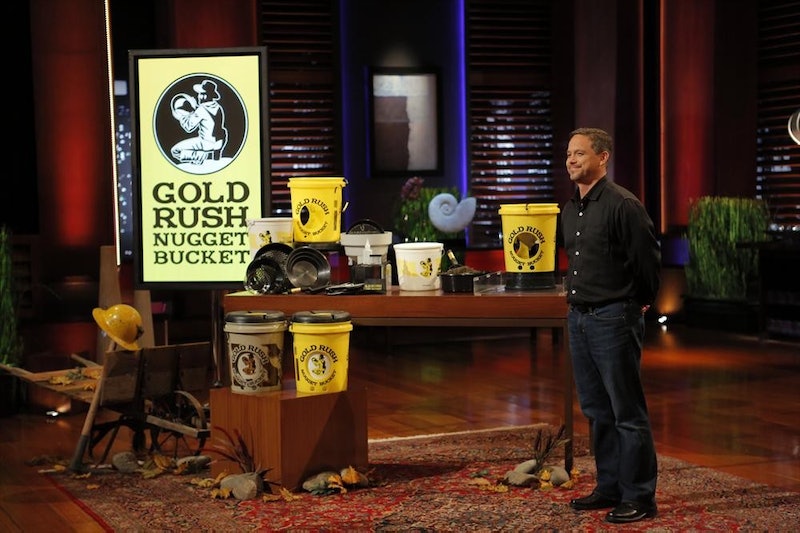 I can honestly say I haven't given prospecting a second thought since I learned about the gold rush in back in second grade (even then, I found the whole thing disheartening, because so many people moved to San Francisco, only to have their dreams crushed) — until today, that is. The Gold Rush Nugget Bucket, which will be featured on Shark Tank this Friday, has me singing a different tune. In fact, it might just make prospecting the next big thing; heck it could actually manage to single-handedly make panning for gold the alluring pasttime that it used to be.

The inventor of the Gold Rush Nugget Bucket, Mark Peterson, will be thrown into the tank on Friday's episode to make the case for his product — should Lori Greiner, Mark Cuban, Barbara Corcoran, Robert Herjavec, and/or Daymond John (if you'll excuse the pun) bite? Will it (please excuse this pun too) sink or swim? Only time will tell, but we can get a jump on things by figuring out everything we can about the potential investment, from how it works, to what it looks like, to how much it costs, to where you can buy it.

How To Work The Gold Rush Nugget Bucket

The GRNB is quite simple. It's made up of several layered screens, a funnel, a small bowl and, well... a bucket. Basically, it funnels and sorts out all of the silty detritus to leave you what the website describes as "a sand trap" in "the concentration bowl." Sounds lackluster, but the sand actually traps the gold underneath it (remember, gold is a good deal heavier than sand), making it a cinch for you to separate out.

It Was Designed With Kids In Mind

Peterson was inspired to create the GRNB when looking for simple, outdoors-y activities for his two daughters — so it's very user friendly (though don't let that fool you, hardcore prospectors use and endorse the product as well).

Dude, You Can Actually Find Gold!

That's a pretty big selling point, IMHO. But will the sharks agree?

So, Where Can You Buy One?

Right now, they're currently available in two different colors (classic gold and fun-loving camo) on the Gold Rush Nugget Bucket online store and Amazon. Retail's steep at $99.95, but who knows? You could strike gold!