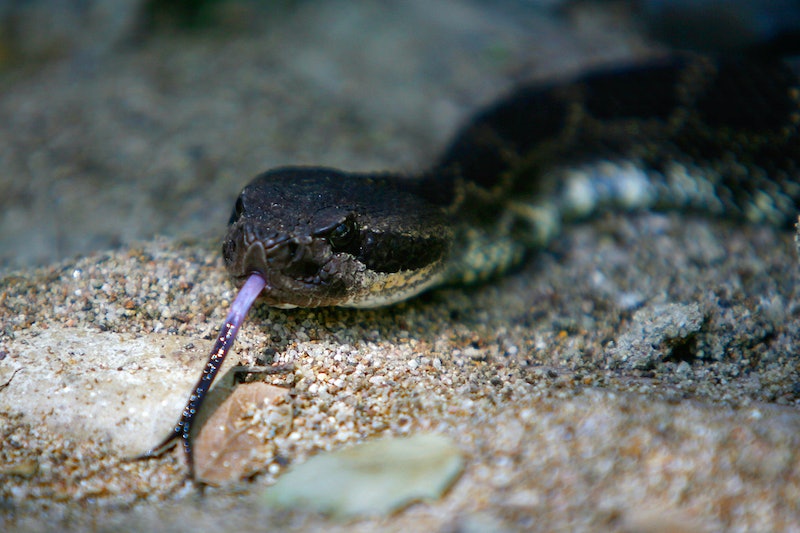 If you had asked me ten minutes ago what my deepest and most primal fear on this earth was, I would have told you that it was the inevitable day when Andrew Garfield and Emma Stone's engagement takes them both off the market for good. But right now isn't ten minutes ago. I'm living in a brand new world right now, full of new fears. Everything is forever changed now that I know a snake spider hybrid known as the Spider-Tailed Horned Viper exists. There is no going back to before. I'll miss those innocent days for the rest of my tortured life.

If the words "horned" and "viper" weren't enough to give you the heebie-jeebies (yes, I'm bringing back "heebie-jeebies" specifically for the purpose of discussing this abomination of a creature), the word "spider" is enough of an addition to make me suspect that this animal either came out of a preschooler's nightmare or a terrible top secret, Jurassic Park-style experiment gone wrong. It's only been recently discovered, and there are very few of these "animals" out there in the world, and unless you live near Western Iran you don't need to worry about running into one any time soon. Still, you should remain ever vigilant, because these snakes take chicanery to the next level. I'm already convinced there's one hiding in my boots right now.

The reason this snake spider hybrid exists the way it does is so it can use its tail, which looks exactly like a spider, to lure in prey like birds collecting insects for their young. All TOTAL PANIC aside, that's amazing and evolution is so freaking cool and I love that something like this exists. Imagine if you were going grocery shopping and thought you were grabbing some Cheez-Its and instead a giant anaconda snatched your body in its jaw in one bite, and that's basically the Spider-Tailed Horned Viper's M.O. If there was a Nutella-Tailed Dragon, I would basically be done in life. There are very few of these vipers left in the world, so the environment department of Iran is being encouraged to protect them from extinction. From the look of this video (WARNING: a bird is full-on murdered, and once you start watching, you won't be able to look away), the snake-spider will do just about anything it can to survive: