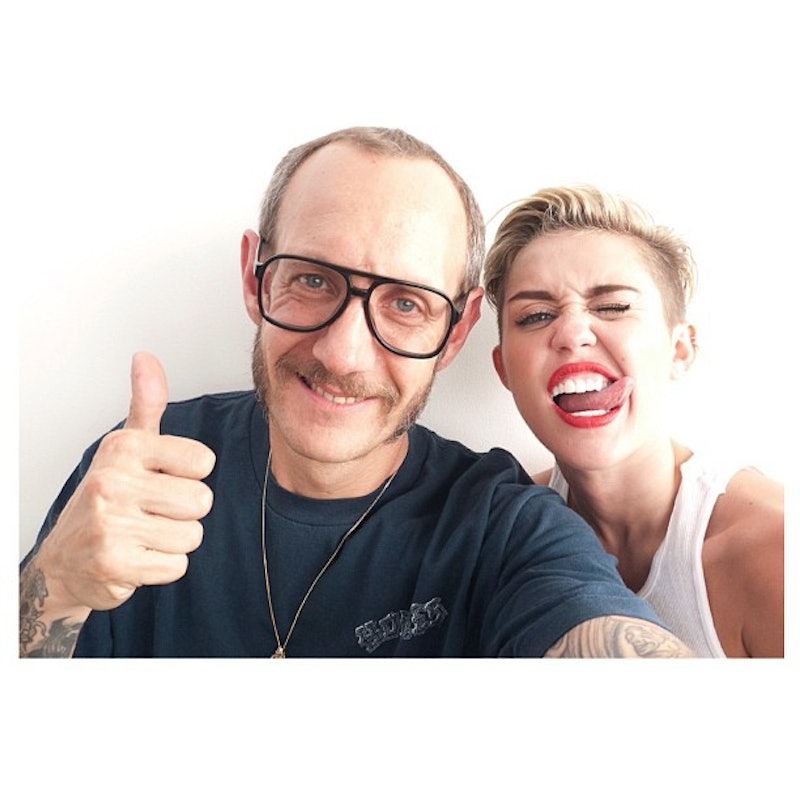 Everyone hated the "Wrecking Ball" music video, but I kind of loved it.

If you analyze the video from an artistic standpoint — and not from the reactive mindset of mayday-mayday-that-nude-girl-used-to-be-on-the-Disney-Channel — you'll see that it's really a gorgeous piece. From the emotional closeups (so intimate that you can see a strand of saliva and the clumps in Miley's mascara) and the perfect simplicity of the color palette to the now-infamous shots of her beautiful nude figure on a wrecking ball — the video is undeniably well crafted. At its core, the video is a mainstreamified art film, and if your only critique of the video sounds like a middle school boy's reaction — "HAHA! BOOBS!" — then you're just art world ignorant, because it was filmed by one of the biggest names working in art today: Terry Richardson.

Uncle Terry is a disgusting person, but a great artist. His aesthetic tends to display luscious female bodies in traditionally boring, blue-collar, or monochrome settings, like a model tumbling out of a laundromat dryer or Lady Gaga in a bathtub. He loves to shoot beautiful women in front of a blinding white background (see: Opening shot of "Wrecking Ball"). Despite the horrifying allegations that have been launched against him again and again, Terry Richardson is a revered and in-demand figure in the art world, so getting him to film her break-up ballad was a clever career move on Cyrus' part. After all, if you want to be taken seriously as an artist, it doesn't hurt to have major art names in your corner.

However. Surely you've heard about the latest Miley + Terry collaboration, if not seen the pictures. (They're on Terry Richardson's tumblr, and they are majorly NSFW.) In this photoshoot, Miley poses for Terry in some sleazy NYC hotel room, performing your typical Terry-approved actions like seducing an ice cream cone and making out with a mirror. But it goes further than a little innocent sugar consumption: Miley uses an Arizona Iced Tea can as a phallic prop, touches herself in a hallway, writhes around topless, flings Terry's signature plaid shirt over her naked shoulders, and wears the world's tiniest thong bodysuit, revealing parts of Miley that the "Wrecking Ball" video managed, through artful use of a chain, to hide.

Two things particularly gross me out about the shoot, besides the obvious. First, the photos don't seem edited at all. The camera glare, the dirty mirror, and Miley's red-eye make them feel less polished-art-project and more gross-old-guy-can't-wait-to-upload-these-to-his-porn-tumblr. Secondly, it appears that the two of them were alone during the photoshoot, judging from the empty room reflected in the mirror behind Miley. (Admittedly, this is just speculation.) Collaborating on a video set is one thing, collaborating in a hotel room is another, especially since these photos are much more sexualized than anything we've ever seen from Miley before.

But here's what's artistically offensive: These photos give us nothing new. They present Miley exactly as we've seen her for months, archly posing as the newly-minted bad girl, tongue out and blunt lit. The photos never manage to show Miley in a new light, which is what good portrait photography is supposed to do. "Wrecking Ball" managed to do just that, presenting Miley as a statue-like nude while marrying eroticism and emotional pain. But this? These photos are just rehashing the predictable, over-sexualized image that Miley has cultivated so diligently all summer.

I'm all for artistic shock value, and let me just reiterate how much I admire a lot of Terry Richardson's work. The man has a great eye and the art of photography would be poorer without him. But I'm not about to praise this latest photoshoot with Miley. There's nothing empowering about holding an Arizona Iced Tea can in front of your almost-naked crotch, or laying topless on a hotel bed. Terry gives us nothing artistically new to consider about Miley Cyrus—he just shows us skin that we haven't seen yet. Gratuitous. Sad. And soon enough: Boring.

More like this
Doja Cat Wore Surrealist-Inspired Schiaparelli To The BBMAs
By Dominique Norman
On TikTok, Miley Cyrus’ “Malibu” Is The Soundtrack Of Growth
By Courtney Young
Spice Girls’ Net Worth: The Richest Member Is Wealthier Than The Rest Combined
By Hugh McIntyre
What Does Doctor Strange’s Third Eye Mean?
By Arya Roshanian
Get Even More From Bustle — Sign Up For The Newsletter