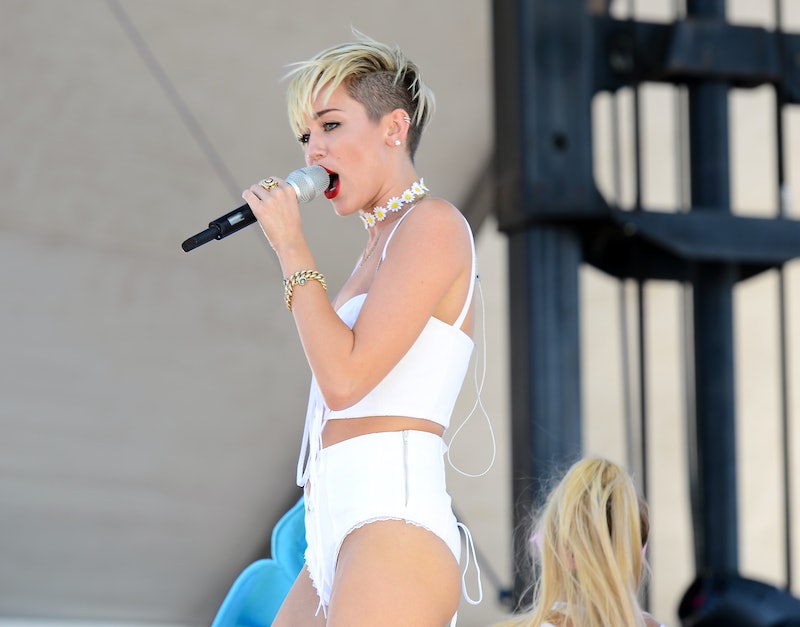 She's just being Miley? In a major photo post on photographer/rumored sleazeball Terry Richardson's Tumblr, Miley Cyrus is, for lack of a better word, doing some crazy shit in Terry's studio — and she's somehow wearing both more and less than she did in her "Wrecking Ball" video, in which she appeared fully naked. If you thought the parent groups weren't going to shut up about "Hannah Montana gone wild" before, they're definitely not going to now.

We can't embed any of the (very NSFW) photos here, but I can do you all the favor of explaining a few before you ultimately click on the link and peruse them yourself. In a couple, Miley smokes some of her beloved ganja in front of a window that overlooks Columbus Circle in NYC, and is photographed blowing smoke into the air. Not too racy. It only gets racier when you get to the photos there are of Miley wearing a one-piece bodysuit that looks like the type you'd get at American Apparel, if you cut out about half of the material by the legs. In another, she sort of bares her breasts — hence the NSFW label. Terry Richardson can also be seen in some of the pics, looking positively delighted as he snaps his photos.

I'm all for Miley expressing herself and doing what she wants, other people's opinions be damned, but honestly, it's all pretty uncomfortable to look at — especially after Miley admitted in her new MTV documentary that she was trying to play a "sexy baby" with her new look. I don't know about you, but I could only think of that one scene in 30 Rock where Liz Lemon is talking to a female comedian (turned How I Met Your Mother mother) who infantilizes herself to appear sexy to men. That's not a comparison anyone should want!

Anyway, you can check out the photos over at Richardson's Tumblr, if you want. On the bright side, these photos are going to piss a lot of people off, which will be hilarious to watch.

More like this
'Black Mirror' Season 6 Is Reportedly In The Works, Here’s What To Expect
By Maxine Harrison
Everything To Know About ‘The Handmaid’s Tale’ Season 5
By Amanda Whiting
‘Euphoria’ Star Dominic Fike’s Amber Heard Comments Got Him Booed During A Show
By Brad Witter
Kanye West Rapped About Feeling That His Kids Are “Borrowed” From Kim Kardashian
By Brad Witter
Get Even More From Bustle — Sign Up For The Newsletter