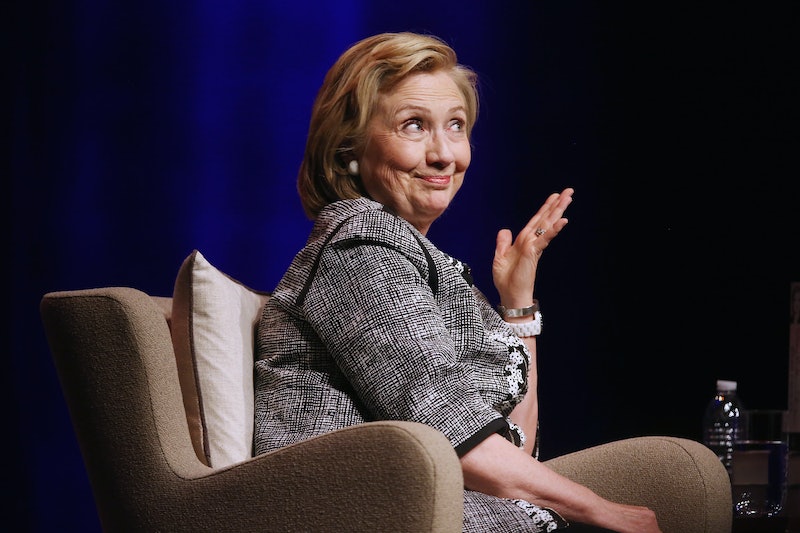 "It's only a matter of time." That's what they said three months ago, even a year ago, and quite frankly we're reaching your limit. Will Hillary just make her announcement already? We can't take it anymore! For two years — yes, two years — America's been waiting on the edge of its seat in anticipation of Hillary Clinton's presidential bid for 2016. That's a long time for speculation, allowing insiders to piece together her campaign with only so much as a few hints here and there from Hillary and her equally tight-lipped husband, Bill. Naturally, every new piece of information and every loaded statement amid the excruciating anticipation has caused so many feelings.

Speculation first started circulating in January 2013, right before Hillary was scheduled to step down as U.S. Secretary of State on February 1. After a successful stint as Secretary of State, not to mention a previous shot at the 2008 presidential race, it was natural for the country to picture the popular Clinton running in 2016. But hopeful visions of a history-making presidency soon gave way to impatient expectation, and by September of last year, the speculation had reached fever pitch, and yet Hillary still hasn't made her bid.

At times, it feels like she actually enjoys watching us squirm. Now, as we wait out the final stretch before she makes her announcement, which reports are predicting will be in April, let's take a look back at all the emotional stages we felt while waiting for Hillary.

When speculation first started, it's safe to assume that every woman in the country was inspired by the idea of our first female president. And this time around, it felt more within reach than ever with Hillary's popularity.

That inspiration quickly fed our excitement until we all became giddy schoolgirls at the prospect of Hillary for president. We couldn't wait for her to make her announcement!

After being named Barbara Walters' Most Fascinating Person of 2013, Hillary told the host that she hadn't made up her mind yet and that she would "make that decision sometime next year." Little did we know back then that this would turn out to be an empty promise.

Hillary dropped a hint while speaking at the Clinton Global Initiative event at Arizona State University. When an audience member asked, "Ms Clinton, if you won't represent women in politics in America as future president, who will?" Hillary responded:

Look, I am very much concerned about the direction of our country. And it's not just who runs for office but what they do when they get there and how we bring people together, and particularly empower young people.... I'm obviously thinking about all kinds of decisions.

Last September, Hillary greeted the crowd at Senator Tom Harkin’s annual steak-fry fundraiser in Iowa, where the first caucuses in the 2016 Primary will be held, with the highly suggestive statement: "Hello, Iowa, I’m back!" Of course, it raised our hopes up again that an announcement was around the corner.

Though he's stayed pretty mum about Hillary's run, Bill did add fuel to the rumor mill by quipping in October:

The great thing about not being president anymore is you can just say whatever you want, unless your wife might run for something.

In December, The Clinton Foundation sent an email blast with the subject "Announcement" and people practically spat out their coffees in excitement. That excitement was quickly dashed when they realized that the "announcement" was fundraising-related.

At the end of January, Politico published a very detailed report of what Hillary's campaign will look like, along with the prediction that she will finally make her announcement in April — OK, this is it! Right?

At this point, we've gone through such a long and twisty emotional roller coaster, we don't even know what to feel anymore. We might just hang up our Hillary 2016 buttons until the official announcement, but that doesn't mean we're not still excited as hell on the inside.

Meanwhile, Hillary has been in one emotional state this entire time.