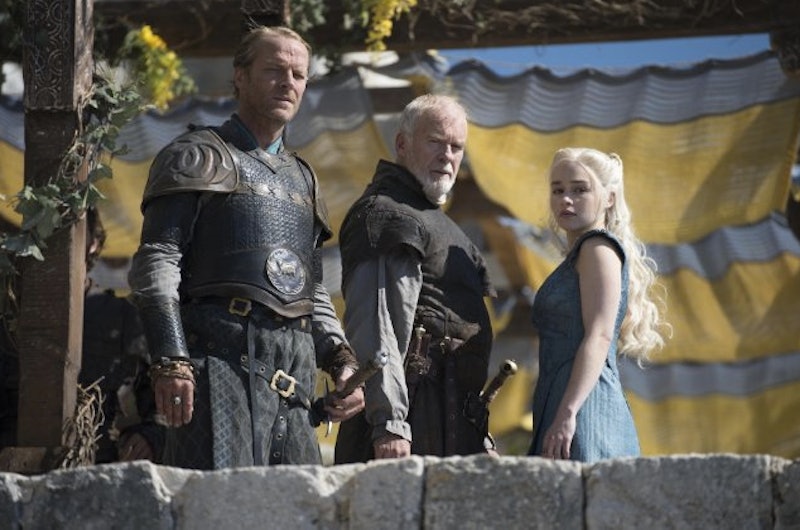 There's no question that Game of Thrones is a huge cultural phenomenon. The fantasy TV series based on the bestselling novels, filled with deathly family feuds, fantastical creatures, and magnificent army garb has been recognized as HBO's most popular program ever — no small feat. Known for its shocking moments and action-packed story lines, Game of Thrones now has a fifth season coming up and set to debut on April 12. Seeing as a trailer for the new Game of Thrones season has recently leaked online, fans are probably more anxious than ever to see what happens next. And in the meantime, these fans are showing their devotion through developing fan sites, writing fan fiction, building photo galleries, and, oh yeah, getting Game of Thrones tattoos.

When you decide to permanently ink something on your skin, it should hopefully be something worthwhile and meaningful to you. If you decide to get a tattoo based off of Game of Thrones, chances are, it is more than just a TV show to you. So, in order to show your dedication to the series, it's best to get a tattoo that speaks to you and will hopefully speak to others as well, if you place it in a spot that other people can easily see. Check out the round-up below of some of the best Game of Thrones fan tattoos for inspiration!

If you are on the fence about how much space you want to fill with ink on your skin, a quote is always a safer bet than an image. Chances are, the quote will not be as expansive as a picture (unless it's longer than a paragraph).

If you do go the quote route, it's best to get a quote that speaks to you from the series. How big or small you decide to make it is ultimately up to you.

Or, you can get a quote that only people who are fans of the series will understand. What better way to connect with people of the same fandom right off the bat?

Of course, this is a tattoo that requires quite a bit of dedication — not to mention ability to withstand some pain on your upper back. But as seen from this fan, the results are really worth it when you earn your wings.

This Targaryen tattoo is a little less intense than the crow picture, but it certainly shows loyalty to the series! And it could always be placed in another location other than the back, if that's not your thing.

This is another great way to tell the world you're a super-fan of the series. But even if people don't understand the reference, who doesn't love dragons?

If you're into working out and have the biceps to show for it, this is a great option as way to geek out over your favorite TV show while hitting the gym!

Who would need to wear a necklace (or any jewelry for that matter) when you have this artwork hanging around your neck?

Even though this one is removable, it can serve as inspiration for a real tattoo if you so wish. Or you could always stick with the temporary route, just for fun.