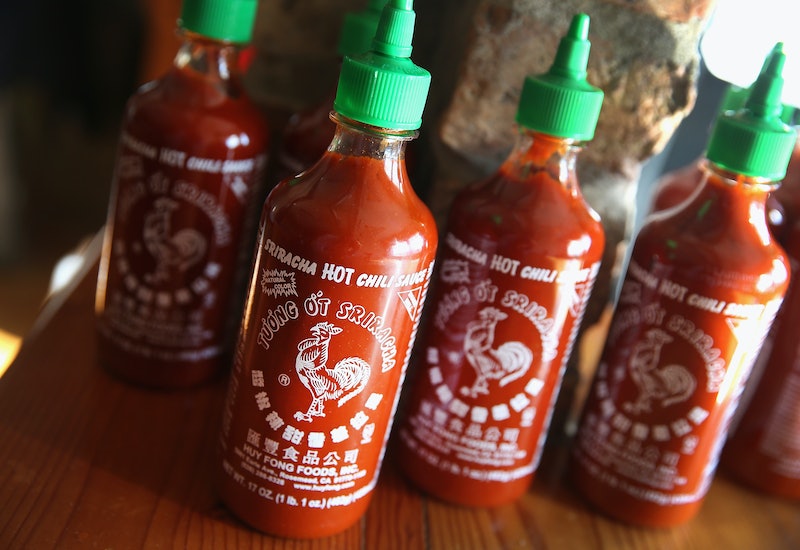 Did you hear about the advent of Sriracha beer, and think to yourself, "Surely we've reached the end of the hot sauce craze?" If so, you clearly lack imagination, because the "caviar of hummus" company Tribe is debuting their Sriracha Hummus later this month, and ohmygod does it sound delicious. The genius who thought to combine hummus and Sriracha is making me seriously rethink my stance on motherhood, because I'd kind of like to have their babies. I mean, I don't want to say that this is the absolute zenith of weird Sriracha pairings, but... I'm just saying it's only downhill from here.If you're a spicy-food weakling like myself, you're probably going to want to have a glass of milk on hand to combat the burn, because the hummus contains red pepper flakes in addition to the hot sauce. Go big or go home, amiright? It'll be hitting grocery stores for a limited time before the end of February, joining the legion of other spicy pairings already out there. Come to think of it, why not celebrate its existence with an entire Sriracha-flavored meal? You can start with Sriracha-infused beef jerky for protein (covered in Srirachup, of course), follow it up with Sriracha-flavored chocolate, and distract yourself from the pain by pounding back Sriracha vodka shots the whole time. Actually, when I put it like that, I'm starting to think America has a problem. But hey, it's not like we don't add it to everything already! Embracing unhealthy habits is practically an American tradition, especially when it involves food.