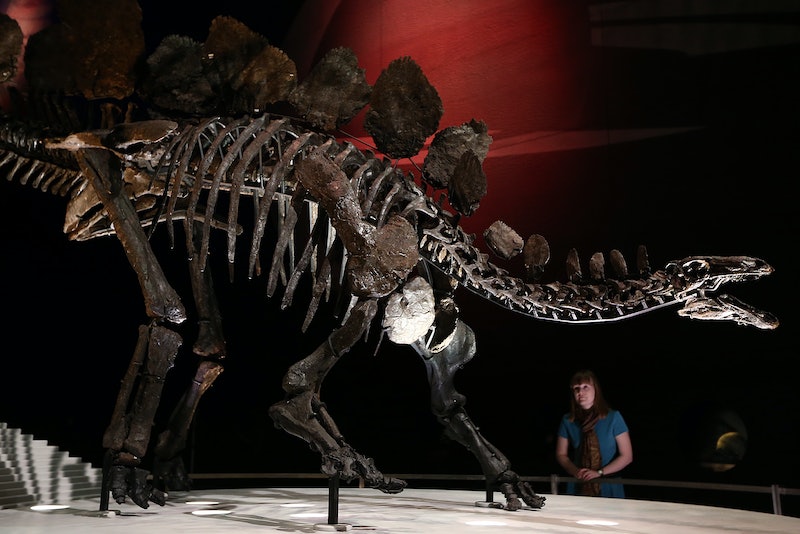 Dinosaurs are often pictured as creatures high on instincts and low on intelligence, but scientists at Oregon State University may have discovered a completely different side to these ancient creatures — grass-eating dinosaurs might have eaten psychedelic fungus akin to LSD, which, really could only mean that these beasts were tripping on LSD all the time, or you know, whenever they grazed.

OK, so the researchers didn't quite say that dinosaurs were tripping balls, but their analysis of a 100 million-year-old grass specimen in a perfectly preserved amber fossil found that the grass — which dinosaurs and other animals used to eat — was coated with a fungus, Palaeoclaviceps parasiticus, that is similar to ergot, a parasite that can cause mind-altering effects and provided the precursor to LSD.

George Poinar, Jr., a faculty member in the OSU College of Science and worldwide expert on life forms in amber, said in a statement:

This is an important discovery that helps us understand the timeline of grass development, which now forms the basis of the human food supply in such crops as corn, rice or wheat. But it also shows that this parasitic fungus may have been around almost as long as the grasses themselves, as both a toxin and natural hallucinogen.

Ergot, a fungus that grows on rye and wheat, has a long-standing history with both animals and humans. As both a toxin and a hallucinogen, people who ate tainted bread were reported to show symptoms of mass hysteria — though typical medical symptoms can include delirium, pain, and sickness.

It also has a strange and rather chilling involvement in the Salem witch trials, as the women accused displayed traits similar to the effects of LSD, though that theory is disputed. The fungus has also been used in medicine to induce abortion or accelerate labor in pregnant women, according to the OSU statement.

Researchers found that Palaeoclaviceps parasiticus is now extinct, though, so there's no need to worry that animals today are ingesting them. But Poinar is adamant that the fungus was definitely ingested by these prehistoric creatures. He said:

There’s no doubt in my mind that it would have been eaten by sauropod dinosaurs, although we can’t know what exact effect it had on them.

Jointly conducted by OSU scientists, the USDA Agricultural Research Service and Germany, the study was published online this month in the journal Palaeodiversity .