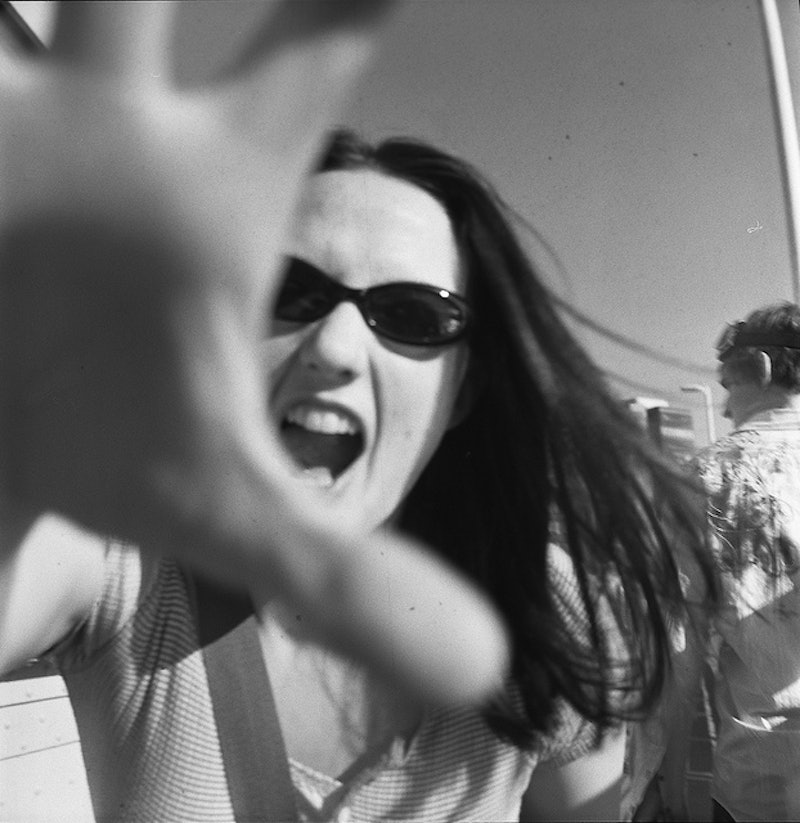 Over the past year or so, there's been a lot of media attention paid to the issue of street harassment and catcalling. As we’ve learned from the year's many videos and articles on the subject, as well as a number of failed attempts at rebuttal (sorry I’m not sorry, #NotAllMen), it doesn’t matter what you look like, what you’re wearing, your age, or where you live — if you outwardly appear to be a woman, you have likely dealt with street harassment. And the problem goes beyond how unpleasant it can be to have strangers demand your attention; it’s also about random men trying to exert control over your life and reinforcing the idea that sexual assault is around every corner.

And the effects of catcalling go on long after you've gone back home. When strange men immediately size you up based on your appearance, it’s difficult to not start doing the same to yourself every time you get ready to leave the house (What am I wearing? Is it too short? What important, world-changing issue was I thinking about before this??!?). Catcalling creates an overall atmosphere of fear for women in public spaces — after all, if this stranger will shout at me from across the street, what else will he do?

While street harassment isn’t sexual assault per se, it stems from the same disrespect for and desire to control women. It is in NO WAY up to women to figure out the right response to street harassment, or to respond in any way — it’s actually up to the catcalling men to stop being misogynistic a**holes. And of course, feeling safe should be your number one priority — there's no point in trying to shout a comeback at a catcaller if you don't feel safe while doing it. But if you are feeling safe, as well as bold, exhausted, frustrated, or just tired of giving your harassers the bird, here are a few creative responses to summertime's catcalls.

Despite what some apologists will say, a catcall is meant to degrade you, not compliment you. So it can be gratifying to turn it on its head, and pretend that a comment hollered across the street really was the highlight of your day. “Oh my god, a man has deemed me attractive! I AM TRULY BLESSED. WILL YOU MARRY ME SIR? I WAS NOTHING BEFORE YOU VALIDATED MY EXISTENCE TODAY!”

There’s nothing more off-putting than getting a taste of your own medicine. So if a catcaller "compliments" a specific part of your body, get back at them by flinging the same "compliment" right back at them. And if they don’t have that same body part, you can always go for the good ol' “Damn, I love that tiny d*ck of yours!”

You can shame your catcaller for their rudeness, their cowardice, or even their lack of game: “Is that the best you can do? Does that line ever work?” Men who catcall women aren’t actually trying to pick them up, they just want to let them know they are being ogled. Shaming them lets them know that they are truly misguided.

4. Remind Them Of The Women In Their Life

Sometimes, it helps/ shames men to remind them that you are a woman — not unlike their mothers, daughters, sisters, or wives. For some crazy reason, a lot of men don’t get that women they don’t know are real women, too. But if you remind them of the women they DO know, they might suddenly remember. Try “Would you let someone talk to your daughter that way?” or “I’m somebody’s MOTHER, so think about that.”

5. Educate Them About The Patriarchy

Every moment is a teachable moment, right? Who doesn’t love a feminist rant?? You certainly don't have any duty to educate anyone about anything, especially some catcaller — but if you feel like it, put those women’s studies classes to work. “Sir, your MALE GAZE is unwanted here,” “Your phallocentrism is showing,” “Ever thought about stepping outside of your gender role and not catcalling women?” “It’s pretty heterocentric of you to think I want you” and “I won’t stand for this oppression” are all good ones.

6. Announce That You Don’t Know Them

This isn’t wacky or silly, but a simple technique that might make you feel safer when being harassed (plus, OK, it does embarrass harassers at least a little). Announce loudly “Sir, I do not know you, please do not talk to me.” Others will hear you, and may even throw a death stare your harasser's way for you.

This one's inspired by Hey Arnold! — because sometimes, the best way to deal with a bully is to just act crazy. And since street harassment is basically just creepy bullying, why not go batsh*t? Dance, sing, scream, make noises or faces. This is your time to shine! If they believe you are on display just by walking past them, why not give them a show?

Inform your harasser that he is a scrub, and alas, you don’t want no scrubs.