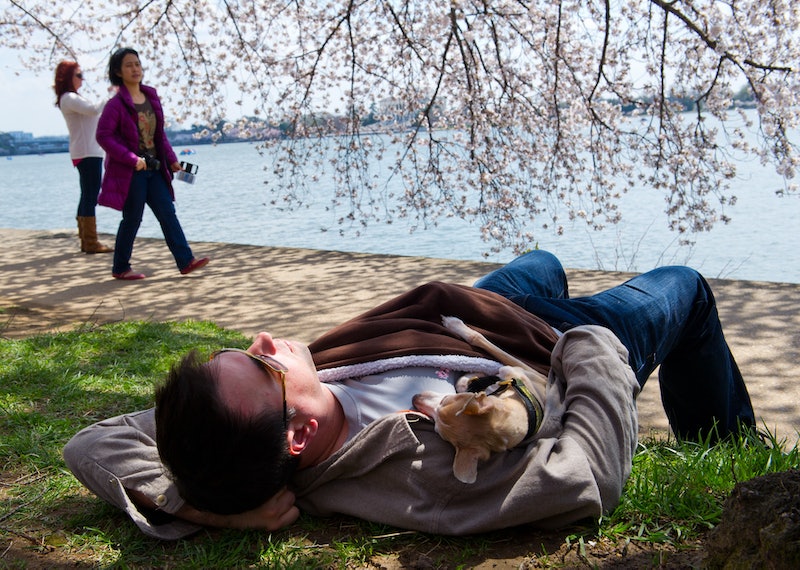 Sometimes, no matter how many sleep tips and tricks you employ, you just don't manage to get a good night's rest. But while it's true that we can't “catch up” on lost zzzs by snoozing more later on, good news: New research has shown that naps actually can help us recover from a bad night's sleep. If ever there was a time to build nap time into your schedule… now would be it.

Given the myriad issues that can arise from or are linked to prolonged sleeplessness — depression, memory loss, increased risk for heart disease, and so on — it's useful to know that there are ways to combat nights when you just don't seem to be able to drop off. The study, which was published in the Journal of Clinical Endocrinology & Metabolism (JCEM), is one of the first of its kind; said co-author Brice Farault, PhD of the Université Paris Descartes-Sorbonne Paris Cité, “This is the first study that found napping could restore biomarkers of neuroendocrine and immune health to normal levels.” Is that excellent news or what?

Although the sample size was small — a group of 11 men, aged 25 to 32 — the results of the study are encouraging. In a laboratory setting (the release specifies that “meals and lighting were strictly controlled”), the men participated in two rounds of sleep testing: For the first one, they were allowed only two hours of sleep on night; and for the second, which occurred the day immediately following the first one, they were allowed to take two 30-minute naps throughout the course of the day. The researchers monitored the effects of these two sleep tests on the participants by analyzing their hormone levels via urine and saliva samples.

Here's the short version of what they found:

So: Didn't sleep well? Have yourself a little siesta. But there are right ways and wrong ways to nap, so do your research first. Here are a few tips to start; dig around a little, and you'll be napping like a pro in no time at all.

Nap too early in the day and it won't do any good; nap too late and you'll have trouble falling asleep that night. When your ideal nap time is will depend on your own specific schedule. Dr. Sarah Mednick, a sleep researcher and author of Take a Nap!, has a nifty little tool on her website called the Nap Wheel that will help you figure out exactly when you should snooze — head on over there to check it out.

2. Limit how long you doze.

According to the National Sleep Foundation, no more than 20 to 30 minutes is ideal for improving “short-term alertness.” Longer than that and you'll drop into the deeper parts of the sleep phase, which will result in that icky groggy feeling when you wake up — and worse, it might make it harder for you to sleep at night. Limiting your time to under half an hour will give you the boost you need to help you get through your day with no ill effects.

This is good advice whether you're napping or having a longer sleep: Never underestimate the importance of your sleep environment. Keeping it cool, dark, and relatively quiet will lead to a more refreshing rest.

Drink a cup of coffee before you lie down for your 20-minute power nap. Theoretically, the caffeine will start kicking in just about when you wake up. The jury's still out on this one, though — others think coffee naps are a bad idea, due to caffeine's habit of disrupting sleep — so if you try it and it doesn't work, you'll know to avoid caffeine before napping in the future.

Worry about needing to wake yourself up can result in poor or restless sleep. Set an alarm before you drop off and you've got yourself covered.