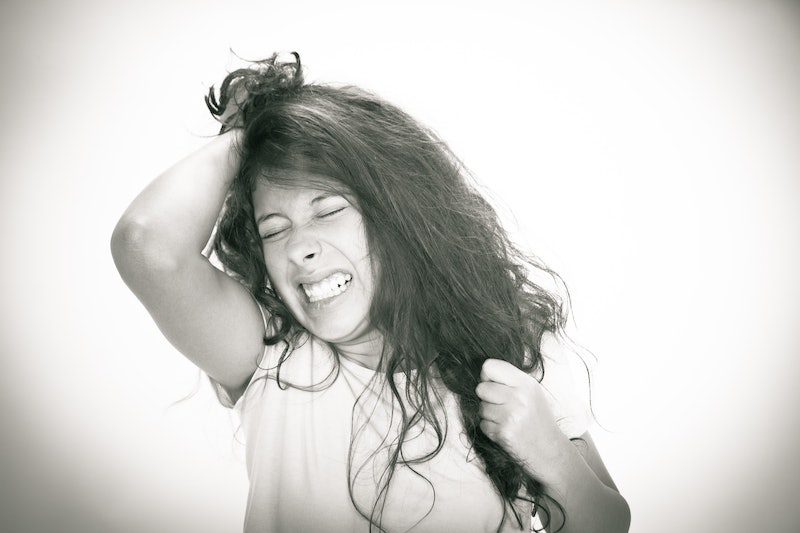 Everyone knows that the of the idea of there being a single kind of "normal period" is about as absurd as that blue fluid they insist on using to represent blood in maxi pad commercials. That said, we do all know what's normal for us, so when our period lasts longer than usual, it's easy to get alarmed. What is going on in there? Were seven days of bleeding not enough for you, my cruel uterine mistress? Generally, longer-than-usual periods are nothing to be worried about, even though they go by the undeniably terrifying-looking medical name of "menorrhagia" (that would be a good name for a metal band, right?). Menorrhagia is a catch-all term for any especially long or heavy periods; but the causes behind menorrhagia are varied.

But before we go any further, let's get this out of the way: your very long period almost definitely does not mean that you have cancer. While abnormal period bleeding can sometimes be an indication of a cancer of the reproductive organs, Dr. Linda Bradley, director of Cleveland's Center for Menstrual Disorders, Fibroids and Hysteroscopic Services, told the New York Times that long periods are a symptom of cancer only 10 percent of the time, mostly among older women. I know you're reading this and going "Sorry, but 10 percent of the time is still a LOT of the time!" And I mean, true. But seriously: I know I am not a doctor, but your long period likely does not have anything to do with cancer.

Instead, your long period may be totally random; a mere product of the hormone fluctuations that go on inside our bodies all the time. But sometimes, your long period does have a medical issue behind it, and often, it is one of the nine listed below. You may want to consult with a doctor if your period has suddenly begun deviating from your usual length; you might also want to bring it up during your next gyno exam if your period has always run longer than seven days.

But remember: your long period might very well be nothing, and even if your long period is being caused by one of the conditions listed below, none of them are serious, and all of them can be easily treated by a doctor is necessary. So don't freak out. It's not the end of the world; it's just a ton of shed uterine lining.

Sometimes, your longer-than-average period is just a sign of a recent change that occurred in your lady parts. These changes can include:

Anything that changes your hormones can mess with the length of your period — and that includes hormonal changes induced by going on the pill, going off the pill, or changing to a different pill. Starting the pill can lengthen your period for as many as three months after you begin taking it, but after that, things should settle down inside your Red Room of Pleasure and Pain (a.k.a. your ute).

You've Recently Had a Medical Abortion

A medical abortion (the kind done using misoprostol and mifepristone, sometimes known as "the abortion pills") can effect your next cycle, and sometimes make it heavier or longer. Your doctor should have briefed you on how long a period you can expect before your procedure, but if you still think it's going on too long, or just feel weird about it, don't hesitate to call them. Your period length should return to normal after a cycle or two.

You've Had a Miscarriage That You Didn't Know About

If you've recently had sperm anywhere near your vagina, your long, heavy period could be an early miscarriage. Early miscarriages among women who don't know they're pregnant are incredibly common — around 30 percent of all pregnancies end in this kind of miscarriage. You don't need to seek any kind of medical treatment if you think this could be the cause of your long period, and having an early miscarriage does not mean anything about your overall health or your future ability to carry a pregnancy to term.

You Have Gonorrhea Or Chlamydia

Bleeding between periods — which can look like just one very long period — can be a symptom of both gonorrhea and chlamydia in women. So if you're having unprotected sex and think your long period could be an STI, check with your doctor — both infections are easy to treat and won't cause any long-term harm if you catch them early. And, you know, please REALLY SERIOUSLY CONSIDER not having unprotected sex any more.

You Have Ovarian Cysts

Ovarian cysts — fluid-filled sacs that grow on the ovary — can lead to especially long and heavy periods. Ovarian cysts are very common — in fact, almost all pre-menopausal women will have an ovarian cyst at one time or another — and much of the time, they'll go away on their own within two or three cycles.

Other times, your long period can be the sign of a chronic or more far-reaching health issue. These can include:

You Have Uterine Fibroids

These non-cancerous growths in the uterus usually show up during your fertile years, and while most women who have them don't know because they often have no side effects, they can cause heavy bleeding and prolonged periods. if you've started regularly getting very long periods, make an appointment with your ob/gyn to see if you might have fibroids, or other reproductive condition that can prolong periods.

You Have Polycystic Ovary Syndrome (PCOS)

Speaking of reproductive conditions that can prolong periods: PCOS is linked to both heavy and light periods that go on for a long time. Doctors can diagnose PCOS, and can sometimes prescribe medication, like birth control pills, that will lead to a shorter, more consistent period.

Longer periods can be a sign of hypothyroidism — a condition where the thyroid is unable produce enough thyroid hormone. Hypothyroidism is common and easy to treat with medication, and since hypothyroidism usually causes other unpleasant side effects, like constant fatigue and constipation, getting it treated can improve your whole quality of life, not just your uterus's.

Women who use traditional IUDs that don't release hormones will often see an increase in the length and volume of their periods, which is totally normal.Images: amenclinicsphotos ac/Flickr; Warner Bros./ Hawk Films/ Peregrine/ Producers Circle, Giphy (6)