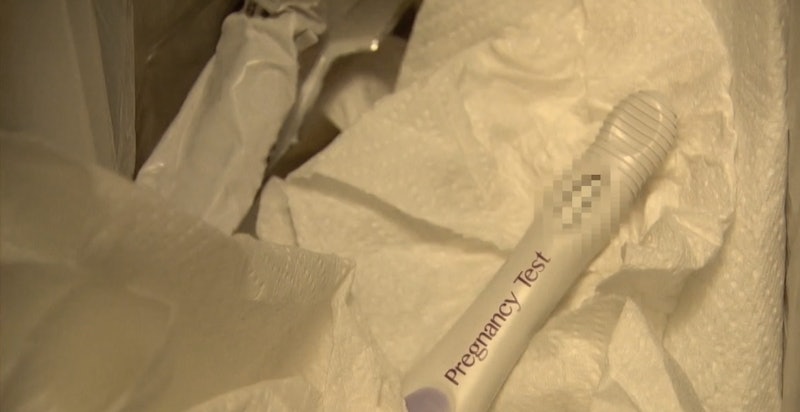 The Bachelor is good at one thing, and one thing only. No, it's not pairing soulmates together for the rest of eternity — just look at the show's marriage track record — no, the show is amazing at teasing us with tantalizing footage of drama to come. This season's preview suggested a season full of tears, fights, jealousy, and a pregnancy test. But while the initial promo teased that someone in Bachelor house is taking a pregnancy test, it's yet to show up on the small screen during an actual episode. Did the show forget? Or is this pregnancy test rearing its head towards the dramatic end of the season? And more importantly, if it's this late in the season, how is it going to come into play?

First, let us agree that Bachelor promos aren't always the most reliable form of information. This pregnancy test could be a whole host of things that aren't as scandalous as it sounds. So what's the deal with the mysterious — blurred — pregnancy test that is supposedly something Chris Soules "didn't see coming"?

When we first got word of the pregnancy test, I assumed it was one of the women's introductions to Chris — because sometimes these women don't run through their limo exits with friends, and weird things happen — but it never came up. Obviously interest was peaked, leading ET to ask Chris if he was a baby daddy back in January, which he responded saying, "No, I am not... I had nothing to do with the pregnancy test."

So if Chris isn't "the baby daddy" behind the pregnancy test, why is there a test being taken? I have a few theories.

Someone Got Pregnant Before The Show

It is totally possible that one of the women was pregnant going into the show and just had no idea. Or maybe she was suspecting it, but decided to wait a little to take the test. It would cause a lot of stirring among the women, but what doesn't these days?

Someone is Playing a Prank

There has never been more laughter and happiness in the house than when Kelsey was eliminated. Maybe the women wanted to live on that high for a little bit longer, so someone came up with the "fun" joke to have a pregnancy test in the garbage bin to get people asking questions. Oh yes, pregnancy is so hilarious.

It's There to Instigate Jealousy

These girls are all developing feelings for Chris, and unfortunately, comparing the progress of their relationship to that of others. If one of the women really wanted to make others think that her relationship with Chris was moving towards the "I need a pregnancy test" end of things, this would definitely create some panic among the other women. Which it shouldn't... everyone's relationship (with the same guy) moves at different speeds.

It's a Crew Member's Test

Womp, womp. I know this result wouldn't be as juicy as the test belonging one of the women in the house, but there's a chance that one of the female crew members used the bathroom in the women's house and disposed of her pregnancy test there, and that ABC decided to exploit the trash can's contents. (Remember when we saw that Bachelor in Paradise crew member break his ankles for Michelle Kujawa?

Or maybe it's just a fake! Wouldn't put it past the producers to just put an unused test in the garbage for the sake of a juicy promo.