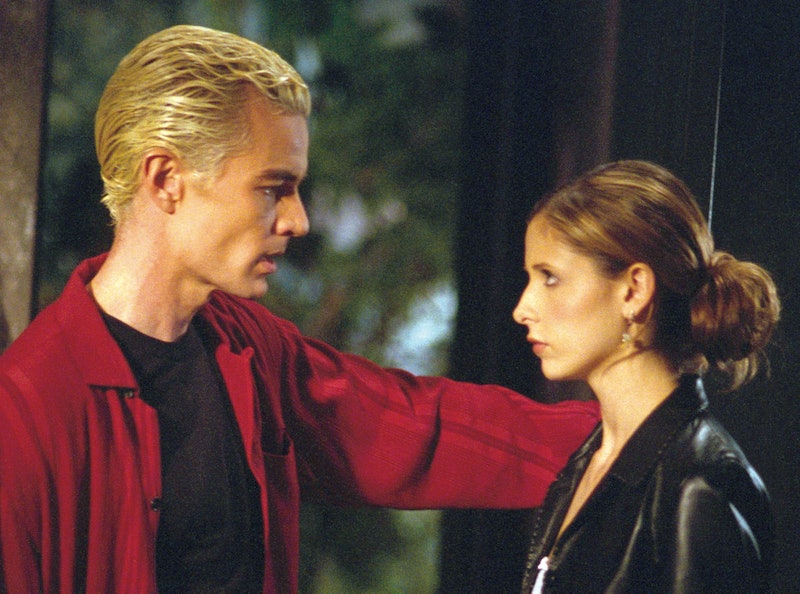 Despite growing up with Buffy the Vampire Slayer, I've been pretty bad with taking it's life lessons to heart. At 12 years old, I had a MASSIVE crush on Spike, and subsequently view on love: "Real love isn't brains, children. It's blood. It's blood screaming inside you to work it's will." Yep, verbatim quote. And in taking these words to heart, I spent my teenage years pursuing love with reckless abandon, making bad choices the Slayer herself would side-eye.

In short, if Spike and I had a relationship status on Facebook today, it would be set to, "It's complicated."

The truth is, I started watching Buffy before I started dating, and despite presenting me with every relationship red flag there is, I felt some crazed need to go through motions. Perhaps this was bound to happen, as Buffy is the only show that presents all the hard truths about love (namely that it's horrible). In any case, I'm 23 now, the same age Buffy was when the show ended, and only now do I clearly see the heartache it was trying to save me from. Like her, I've been to hell and back.

And though that sense of empathy certainly gives me comfort, I think it's best to pass on the Buffy's lessons on love to someone who maybe hasn't been there (yet). So here's a few things I should've (but didn't) learned about love and dating from Buffy the Vampire Slayer — in honor of Valentine's Day, of course.

In ways, Buffy and Angel's relationship is all of our first real relationships: melodramatic and suddenly over after you put out. More than anything though, their feelings for each other were everlasting, even when Buffy straight-up killed him. Who DOESN'T have that relationship with their first boyfriend?

That version of love is so rarely seen on television. When although you love each other, you both know that it's best that you're separated, even if it hurts. Definitely by a time slot, probably by a channel. It's hard to negotiate those differences when one of you is a WB and the other is a UPN, but perhaps, in another life, you'll both be CW. On a related note ...

I should've known that sometimes it's best to let go of someone ... but there's a time and a place for that.

"Letting go of someone" is a grand recurring theme when it comes to Buffy relationships. Oz with Willow, Tara with Willow, Angel with Buffy, Riley with Buffy (actually that one's kind of a win), it's not an uncommon practice. THAT SAID, if you're going to break it off, it helps to be considerate about it. Angel, for example, was like any good high school boyfriend and broke up with Buffy towards the end of her senior year, but still showed up to dance with her at prom. That's class that my high school boyfriend never had, rest assured.

(Xander, however, flaked out on Anya on their wedding day. Goddammit, Xander.)

I should've known that even the strongest woman can be crushed by a break up.

Which isn't to say that Buffy, protector of the world, slayer of all evil, she who was gifted with extraordinary power, wasn't devastated when Angel dumped her. Who can remember that all-too-real-moment when she describes the break up to Willow, and then her face crumples up and she starts crying. "I can't breathe, Will. I feel like I can't breathe," she says, as she sobs in Willow's lap.

It's at this point that I, reminded of every failed relationship I've had, lean into my laptop and start sobbing. And then my mom comes into the room and ask if I'm okay.

I will never be okay, mom.

I should've known that it's no good to string along inferior men to maintain a sense of normalcy.

Ugh, this guy. Riley is sort of the Aiden Shaw of the Buffyverse, but worse because he never bought Buffy a macbook, and he was clearly intimidated by her power. He felt so inadequate that he had to like, go to shady houses and get his blood sucked by vampires to feel alive. Prostitution metaphor? Prostitution metaphor.

But Buffy's at fault here too, because she should've cut off that dead weight long before it got to that point. It's fair to understand why she'd keep him, since having a sweet human boyfriend was a refreshing change of pace, but I've seen countless women stick with the "safe" choice because it just seems better than what they've previously dealt with.

For what it's worth, I don't have this problem too often because my type is exciting emotional sadists. Which brings me to this ...

I should've known that the most intense relationships are the ones you keep secret.

THE REALEST REAL. The statement that sums up my dark days and untold stories of Philadelphia, and Buffy's entire season 6 arc with Spike. At some point in your late teens or early twenties, you start hooking up with someone who's bad for you, maybe because you think he's a soulless creep, or maybe because you simply think you're better than him. And whether that's your own elitist self-righteousness or 110 percent true because he's a cashier at 7-Eleven, it ends badly.

And finally, the thing I should've learned most is that at the end of the day, it all doesn't matter. Because everyone you love will die.