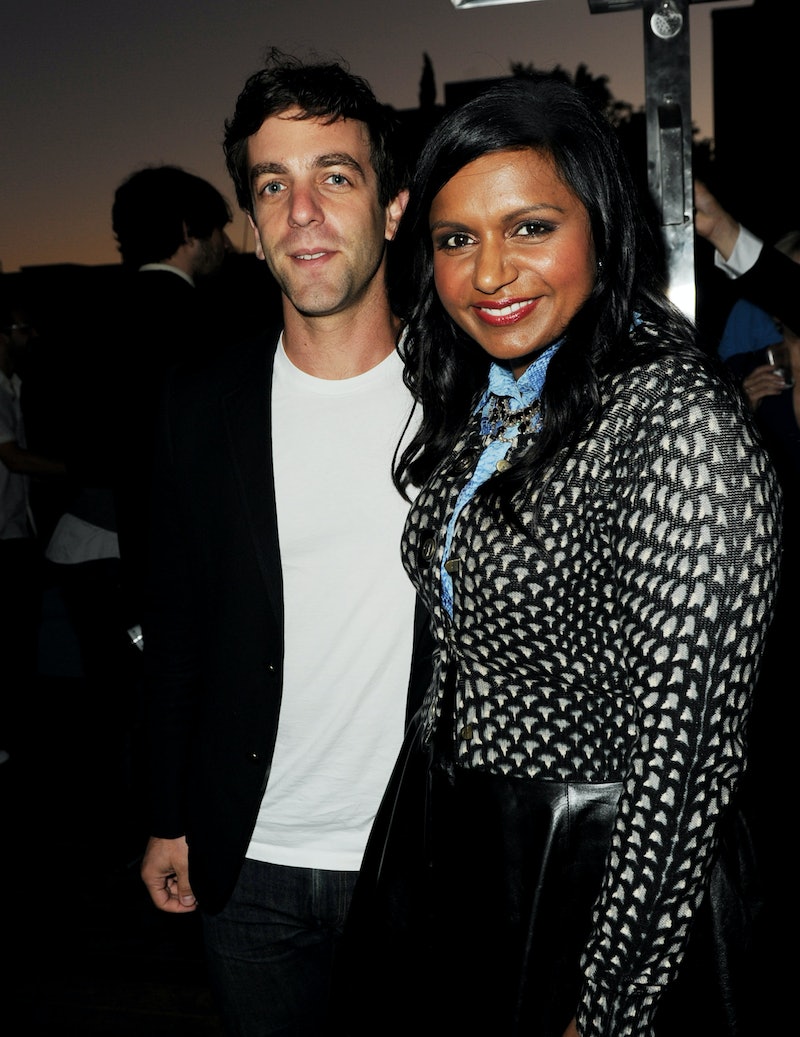 Here's a little Valentine's Day treat for you that may restore your faith in love. While giving a talk about his new children's book The Book With No Pictures at Manhattan's 92nd Street Y on Tuesday, writer, actor, and philosopher BJ Novak declared his undying support and admiration for the always awesome Mindy Kaling. The talk was really supposed to focus on Novak and his writing works, but as do most conversations in our lives, things turned to the subject of Kaling. When an audience member asks what it's like to be Kaling's friend, Novak replies: "It's really fun to be her BFF."

He continues, “It is a fantastic relationship with a lot of shorthand. I feel so lucky that I get a brilliant text from Mindy Kaling, like, once an hour. It’s like something you’d win at an auction — Mindy Kaling will blow up your phone!”

Now, once a BFF always a BFF, but Novak does admit that as colleagues their relationship takes on a bit of a different dynamic, but he still always supports his main gal. "It's really fun to be her BFF, it is less fun to work with her. Mindy knows exactly what she wants, which makes her a great artist, but it is less ideal to get what you want." He goes on to talk about how when they were both writers on The Office in totally equal positions, they would fight the most of all the writers, but they would also "ally the most." He also mentions that his favorite episode of The Office is "Diversity Day" written by, you guessed it, Kaling.

When Novak was brought on as a consulting producer for The Mindy Project, he says it was established from the absolute beginning that they were no longer equals. "If they [at The Mindy Project] needed help I would come in and write or run the room. If I had an idea I would come in and pitch it, but there was never any question of who was in charge. This was Mindy's show," he says bluntly.

But Kaling being a total boss lady seems to only make him love her more. Another audience member asks if he is going to marry her, to which after only a slight pause he says, "I don't know." Kaling and Novak have a well publicized on-and-off again romance (but have always remained friends) since both were hired to work at The Office in 2004. Novak told New York m agazine in 2012:

The pair mimicked their relationship when Novak guest-starred on The Mindy Project in Season 1 as a love interest for her character, Mindy Lahiri. Their characters were great together, except for the fact that he had a very close relationship with his female best friend, played by Eva Amurri (the two characters ended up getting together with Lahiri's help). He told Entertainment Weekly when that episode came out in 2013:

We are pretty inseparable best friends with a lot of chemistry ourselves, and we're not dating. Whenever we date anyone else, I think there's a period where the person is very skeptical of our friendship.

Of course, since it sounds like he would consider marrying her, maybe they're an item again. One thing is for sure, though: If Novak takes over for Jon Stewart on The Daily Show (he is on the list of contenders) who would his first guest be? Without hesitation he says "Mindy Kaling."

More like this
How Much Are The 'Schitt’s Creek' Stars Worth?
By Hugh McIntyre
‘SNL’ Finally Spoofed Nicole Kidman’s Weirdly Beloved AMC Ad & Nailed It
By Stephanie Topacio Long
Jonathan Bailey’s BTS ‘Bridgerton’ Photos Celebrate 6 Months Of “Kanthony”
By Stephanie Topacio Long
'Inside Man' Was Inspired By 'Sherlock' In The Most Unexpected Way
By Catharina Cheung and Maxine Harrison
Get Even More From Bustle — Sign Up For The Newsletter