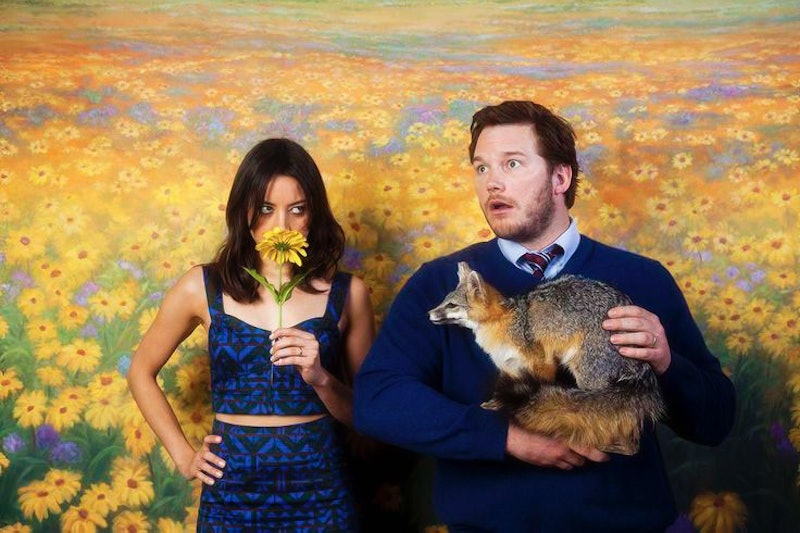 While other couples of NBC's hit series Parks and Recreation have had their ups and downs, there is no wondering about the fate of April Ludgate and Andy Dwyer. Fans of the show have watched the unconventional couple fall in love and be overall weirdos together for seven seasons. But we wouldn't have them any other way. Sure, there's Leslie and Ben, a totally awesome power couple who like waffles and calzones (respectively) in spades. There's on-again-off-again Ann and Chris, who are too beautiful to be on screen together for an extended amount of time. There's even Jerry and his too good to be true wife, Gail — and let's not forget about their questionably beautiful toe-headed brood.

Parks and Rec is full of worthy couples to root for, but if you feel like you'd rather receive an edible Ring Pop from your significant other over a diamond-encrusted band, you might be the April of your friend group. And if your significant other may or may not actually be a human-golden retriever hybrid, he's most definitely Andy. Are you easily distracted? Do you generally hate everything?Here's a few other ways to find out if you're relationship is identical to April Ludgate and Andy Dwyer's.

You Roleplay Fantasies That May Or May Not Be Politically Correct

Because sometimes asking, "Have you guys seen Hitler?" is a totally warranted question.

For You And Your Significant Other, There's No Such Thing As Too Much PDA

There's nothing you would do behind closed doors you wouldn't do in public.

You Have No Problem Baby Bird-ing One Another In Public

Because why would you put a piece of already chewed gum in the trash when it could go into Andy Dwyer's mouth?

You Love To Show Off One Another

Because the best thing you ever did was get together with her/him.

One of You Is Uber-Positive, While The Other Is, Well... April.

The world isn't going to be cruel and judgmental and sarcastic to itself, now is it?

Because there's only one other person other than you that understands you.

You Adapt Different Personas When In Public

Because tricking people is fun, and so is wearing fancy sweaters and pretending to be Eleanor Roosevelt (or Leslie Knope).

The Only Thing You Love As Much As Eachother Is Food

Butter, ring pops, sugar, butter... what else am I missing?

Most People Think You're Weirdos, But You're Actually Really Deep

One of you might be the eternal optimist, while the other is a constant downer, but you even eachother out.

You Might Be In Your 20s/30s, But You'll Always Be A Child On The Inside

Even if you own your own house, are deputy of a department, or are married before your older counterparts, you'll always be the kid wanting to shoot Ben Wyatt with a NERF gun.

You Dress To Impress — One Another, That Is

Who needs a full wardrobe when you can just borrow your boyfriend's sweaters?

He's much more cuddly, and easier to talk to.

And No Matter What, You Always Support One Another's Unconventional Ideas