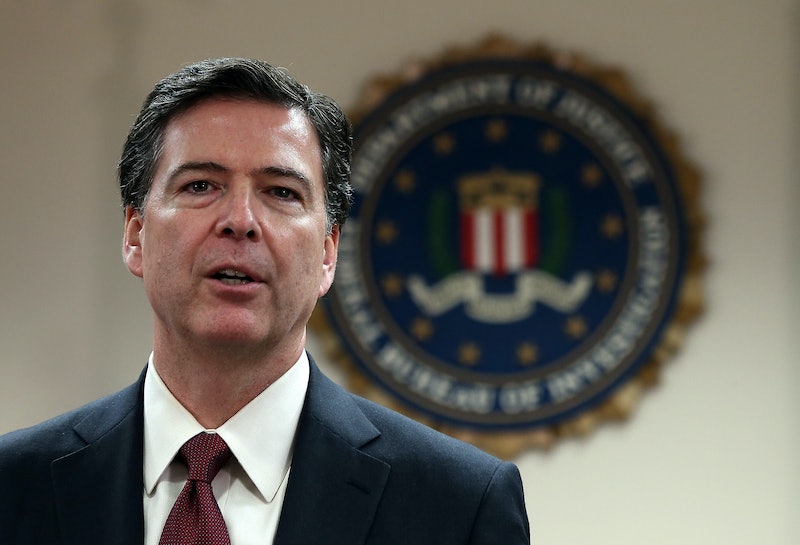 In a speech at Georgetown University on Thursday, FBI Director James Comey said police officers can be racially biased. Comey admitted that U.S. law enforcement has a history of discriminating against black people and the FBI needs to improve its data collection on racial demographics of police run-ins nationwide. Although his comments were pretty vague, they're an important first step toward changing how the police interact with the non-white public. Comprehensive data collection would help the FBI better track the racial bias that takes place across the nation, making it more visible and hopefully leading to fewer injustices.

Comey's comments follow a turbulent time for the police, with the Michael Brown and Eric Garner killings and the nationwide protests that followed. Racial bias and injustices by police officers are incredibly apparent, and acknowledgement of these issues by the FBI director at least shows that the bureau isn't ignoring the problem entirely.

Collecting and analyzing data on police killings and forceful actions won't stop racial bias from affecting police officers, but knowing the specifics of the biases could help the FBI locate where the problems stem from and where they're the most prevalent. In his speech, Comey said:

The first step to understanding what is really going on in our communities is to gather more and better data related to those we arrest, those we confront for breaking the law and jeopardizing public safety, and those who confront us. "Data" seems a dry and boring word but, without it, we cannot understand our world and make it better.

First, we need to compile information on people killed by a police officer. Comey explains that the FBI tracks "justifiable homicides" by police officers, but police departments report them voluntarily and not all departments participate. Having a database of killings would allow the FBI to begin to understand the circumstances that often lead to a death caused by the police. Recognizing common denominators and similar situations could help decrease the frequency of tragic killings of innocent young black men.

In a similar vein, data on police officers' use of force during arrests would bring to light how forceful arrests can be racially biased. It's well-known that men of color are arrested in higher numbers and with more force, but the actual figures would establish it as an indisputable fact.

African-Americans now make up 1 million of the 2.3 million people incarcerated in the U.S. That's 43 percent of the entire prison system. Arrests for drug offenses make the racial leanings increasingly clear. According to the NAACP, African-Americans represent 12 percent of drug users, but 59 percent of those in state prison for a drug offense. Data collection on drug arrests would also be beneficial for uncovering why these statistics are so staggering.

Data is needed before things can change. You can't effectively solve a major nationwide problem without fully understanding the issue. Let's hope Comey makes this a reality.