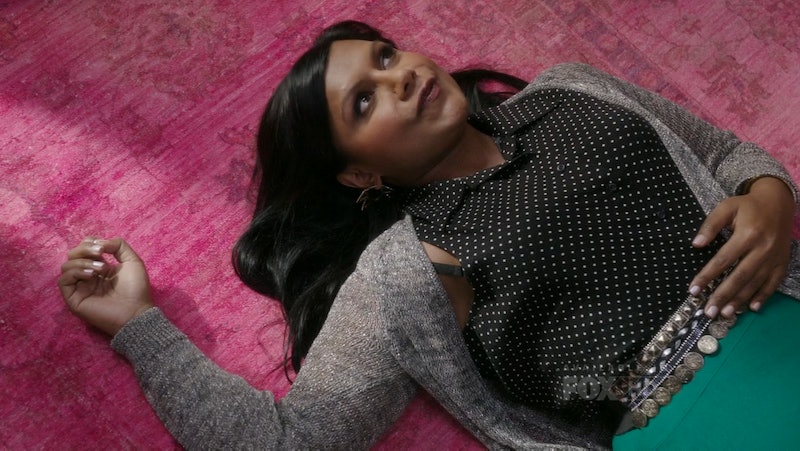 As someone who's invested in her fictional life, I think that Mindy Lahiri should consider getting an abortion. Now, we already know she's probably not going to get one, but hear me out. I’m an avid watcher of Mindy Kaling’s millennial magnum opus, The Mindy Project , as are most of my female friends. It makes sense that we would be. We’re the show’s target demographic: Young, professional women who appreciate well-timed snark, empowered women, and the E! network in equal portions.

For a show that touches on so many of my own life’s major events, it would seem natural that there would be a pregnancy scare. But “scares” and actual, real-life positive dollar store tests are two different things, and The Mindy Project has written themselves into a very interesting and, yes, still-relatable corner with Mindy's accidental pregnancy this season. Thankfully, I also think it's the perfect show to take on the issue of abortion. But let’s back it up a little.

The Mindy Project, with its intelligent and funny characters of all shapes, sizes, and genders, is well positioned to tackle the abortion debate and not only make it funny, but prove to so many women — at least 1 in 3 — that it’s okay, normal, and nothing to be ashamed of.

Kaling said as late as last September that she wouldn’t include a storyline about abortion on her show, saying that, “it would be demeaning to the topic to talk about it in a half-hour sitcom.” She revised her statement a few weeks later in an article on HuffPost, saying that she meant she didn’t think her sitcom was the right place for such a discussion.

“I should’ve said ‘for now,’” Kaling clarified. “I don’t want to lock myself into never talking about it. [But] it doesn’t strike me — and I don’t think this is controversial — as the funniest of areas, and I run a comedy show.”

But I think she’s wrong. If anything, comedy shows have shown our generation that it’s not only okay to joke about serious topics, but that we should also expect it of our favorite shows. (As The Daily Show and The Colbert Report have proven time and time again, if we don’t laugh at serious topics, we might as well cry.) The Mindy Project has talked about difficult topics before, directly joking about the criticism that the show has a "race problem" (aka that Mindy only dates white guys). When an episode in 2013 addressed the issue head on, Lahiri tweeted that “this one might offend people, but in a good way where we learn from it.”

Same goes for this plot-line.

The Mindy Project, with its intelligent and funny characters of all shapes, sizes, and genders, is well positioned to tackle the abortion debate and not only make it funny, but prove to so many women — at least 1 in 3 — that it’s okay, normal, and nothing to be ashamed of. If only for the mere fact that all of those things are true, but also because… well, if Mindy Lahiri can have an abortion, maybe so can they. And maybe it's going to be okay.

Yet in her previous interview with The HuffPost, Kaling balked at the idea that even though her character worked as a gynecologist, she should talk about women's health.

My show is not about gynecological issues that much. It’s about a workplace — the way ‘The Office’ wasn’t really about paper. It’s hard to say those things and not sound like I’m not skirting the issue, but at the same time, our show from the get-go hasn’t made its centerpiece to focus on political issues. Instead, the fact of the way that I look and the decisions I make — the character — that has sort of been our more subtle mouthpiece for those things.

But a show doesn’t need to make political issues its centerpiece in order to take one on. Kaling’s obvious wit and wisdom means Mindy-the-character could normalize a situation that is still fraught with so much guilt and social backlash. Approximately 97 percent of gynecologists have had a patient ask about the abortion option, and 3 in 10 women will have one in their lifetime. And yet a show that revolves around a gynecologist's office has never so much as once talked about the issue?

The Mindy Project wouldn’t be the first sitcom to successfully air an abortion plotline, and I think Kaling and the writers are shying away from something that could be phenomenally helpful and relatable to a lot of women in their audience. Because while Mindy and her boyfriend Danny are well-off and love each other, the time is simply not right for this accidental pregnancy.

It just makes too much sense to me for a strong woman like Mindy Lahiri to stand up and say, “Look, this was a mistake, and it would be a mistake to continue with it. We’re not ready for a child, and I’m making the informed decision to end this pregnancy.” I would applaud that.

If Mindy Kaling wants to be a mouthpiece for women who sometimes have to make tough decisions, then I think she should consider the fact that her audience can handle her making one.Images: FOX; Giphy (3)

More like this
Here’s How Lizzo Is Supporting Abortion Rights After The Roe v. Wade Reversal
By Brad Witter
Jurnee Smollett’s Heart Is Healing
By Rebecca Carroll
Why Sadie Sink Is Hopeful Max Will Return In Stranger Things Season 5
By Brad Witter
What Working At Marvel Is Really Like, According To A 'Ms. Marvel' Co-Creator
By Gretchen Smail
Get Even More From Bustle — Sign Up For The Newsletter