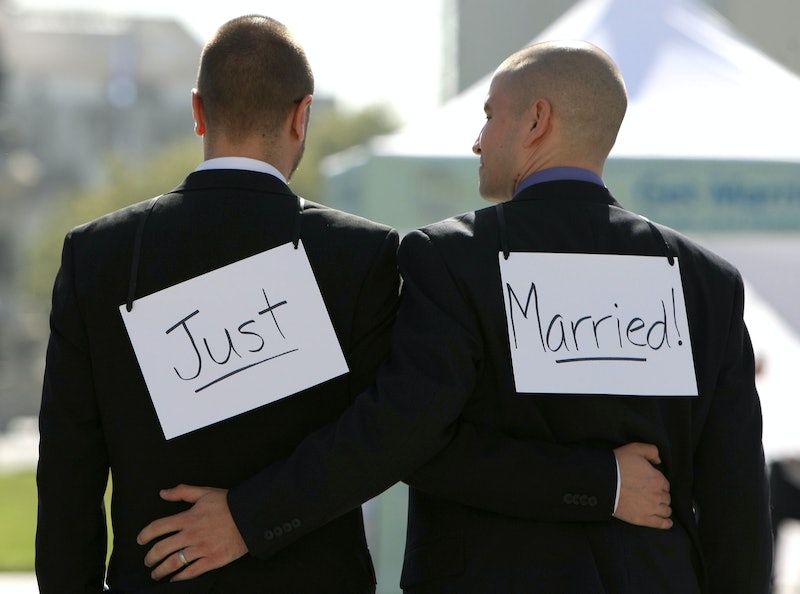 In the aftermath of Alabama's Jan. 23 same-sex union victory, a few counties began immediately issuing licenses to gay couples — but there were many who stood firm in their refusals, upholding a conflicting order from Alabama Chief Justice Roy Moore this past Sunday night, which instructed courts to ignore any U.S. Supreme Court rulings. In places like Mobile, county courthouses closed their doors to the public entirely on Monday morning, declining marriage licenses to both heterosexual and same-sex couples in protest of what they believed was an unconstitutional measure. By Thursday afternoon, however, at least one federal judge had had enough. In an official order, U.S. District Court Judge Callie Granade stipulated that Mobile County probate judge Don Davis must begin issuing licenses to same-sex couples, regardless of Moore's reversal. While Granade's ruling might have angered many officials and civilians in the largely anti-gay marriage state, at least one Blount County man is showing support for the same-sex union ruling — and in a seriously funny way.

"Redneck News" reporter Jeremy Todd Addaway, an entrepreneur and Clay, Alabama, native, posted a hilarious video to his Facebook page on Monday afternoon (the day the ruling went into effect), pretending to cover the events from the wooded area surrounding his home.

"I read on the news ... that homosexuals will be getting married in the state of Alabama today," he remarks in a businesslike tone, "I wanted to give you a live report from Blount County." In a flat voice, he continues to describe the mundane conditions, adamant that there were "no homosexuals laying on [his property], doing homosexual things" — at least not yet:

"It looks like we're pretty safe here in Blount County," he deadpans. "We're not gonna be subjected to any kind of ... plagues of homosexuals falling from the sky."

Since his video quickly went viral, Addaway admitted in a second video on Wednesday that he had been buried under mountains of Facebook messages since the initial post and wanted to clear the air about a couple of the most frequently asked questions:

I've had maybe about 560 messages today asking me if I'm a "bear". And I just want to clear the air right now: I am not an Alabama fan. I have never been an Alabama fan. I am an Auburn Tiger — that's "war eagle" [Aurburn's rally cry] all the way. I don't know why y'all would think I'm an Alabama fan.

A "bear," of course, is an slang term commonly used by the gay community to describe a "husky, larg[er] man with a lot of body hair," according to Urban Dictionary. Addaway, it seems, just couldn't resist the chance to troll his viewers one more time.

Social media has latched onto the video, with some even suggesting that Addaway's epic reporting skills might make him a good replacement for a certain recently disgraced NBC anchor:

As the rest of his state bickers over the constitutionality of the same-sex union ruling and attempts to bully one another into submission, the public can at least feel safe in the knowledge that "Redneck Reporter" Addaway will be there to report on it.