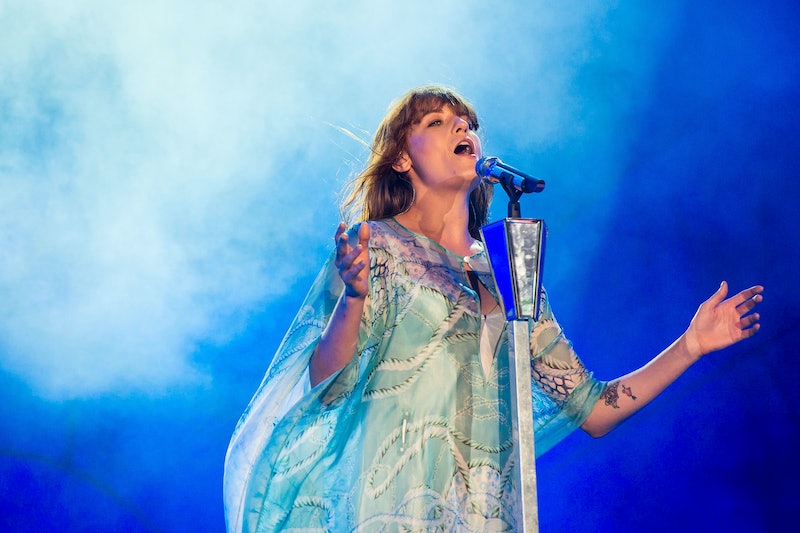 Only a couple days after releasing her video for "How Big How Blue How Beautiful," Florence Welch has released the visuals for Florence + the Machine's "What Kind of Man" and I must warn you: Absolutely everything about it is extremely intense, from the opening discussion between Welch and her onscreen lover (which lasts more than a minute) to all of the pushing, shoving, shouting and visible emotional angst that takes place throughout the nearly six-minute video.

Anyone who plans to see Florence + the Machine play Bonnaroo this year should definitely be in for a treat, especially if the festival performance is anywhere near as dramatic as this video. From what I gathered, it's ripe with symbolism that portrays a romantic relationship that's deteriorated to the point of completely destroying a couple, as lovers and as individuals.

Trust me when I say it's not the most Valentine's Day friendly song or video, but it's certainly worth the watch. There's no doubt that the band put a ton of creative effort into this project, even if it does leave me feeling totally overwhelmed with angst and sadness. Seriously, I'm with Welch when she sings, "What kind of man loves like this?"

Sheesh, after watching this video, I'm convinced that no one ever deserves to find out.

Here are the 5 of the most intense moments from "What Kind of Man":

It took me a couple of views to catch on to what's happening (or about to happen) here, but errm, let's just say this scene could've easily fit into the Fifty Shades of Grey movie.

The dim lighting, Florence's hunched over posture and the huge, crashing waves on the TV all signal the arrival of something awful.

I hate to give away too much of the video, but this scene is so violent and sudden that a warning is necessary.

Ouch. Based off my analysis of this video, I'm guessing his wounds represent the scars of a romance gone wrong.

After all the previous turmoil, Florence appears to be undergoing some sort of spiritual cleansing.

Can't say I blame her because this video is a LOT to take.

Watch "What Kind of Man" in full below: