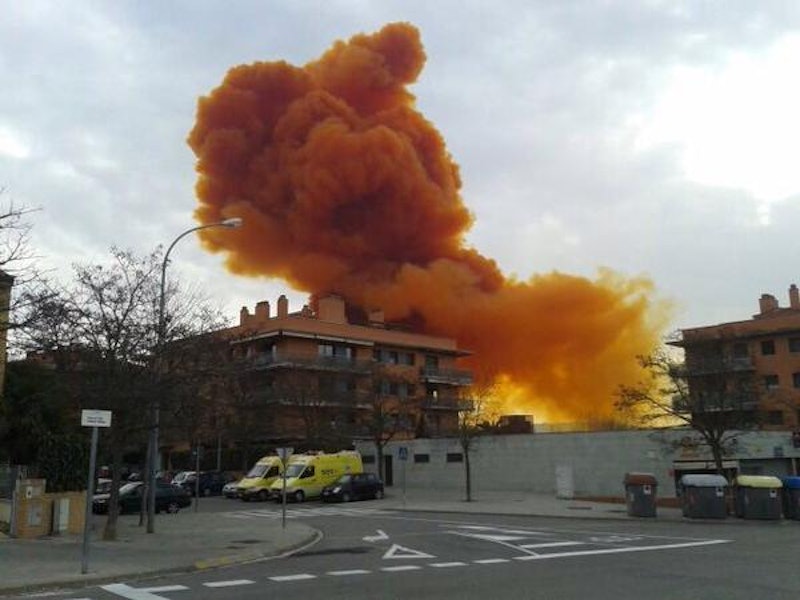 On Thursday, a weird orange cloud billowed over a neighborhood in eastern Spain for hours, The Guardian reported, and the pictures and tweets of the scene are pretty insane. The cloud was caused by an explosion at a chemical warehouse, and though officials said that the chemicals were not toxic, but rather just irritants, some 60,000 people in five towns in the region were ordered to stay indoors for hours until the cloud dissipated. Later, a government official told the Guardian that exposure to the cloud could cause "itchy eyes and a runny nose, but no choking sensation."

The two chemicals that combined to make the orange cloud, nitric acid and ferric chloride, were being delivered to a warehouse in Igualada, in Catalonia, when they mixed and exploded. Two civilians and three firefighters suffered minor injuries, The Guardian reported, and a lack of wind in the area at the time of the explosion meant the chemicals stayed in the air a long time.

If you paid attention in chemistry class, or listened to Walter White on Breaking Bad, you might recall that while ferric chloride is used mainly as a water purifier, nitric acid is used to make fertilizers and explosives and can cause severe burns, according to the Encyclopedia Brittanica. According to The Daily Mail, workers who come into contact with either chemical have to wash any exposed area with soap and water, and seek medical attention.

Spain's emergency service department tweeted to residents that the situation was "not a game," and warned against taking photos of the cloud, because it could be dangerous. According to a report in The International Business Times, the local government in Catalonia indicated that the plant where the explosion occurred is owned by a Spanish company called Simar. The IB Times said roads in and out of the town of Igualada were closed during the height of the incident.

While it was no doubt a scary situation for the people living near the plant where the explosion happened, given the dangerous nature of nitric acid — which has been used in the past to propel rockets and missiles — it's pretty fortunate there were not more serious injuries.