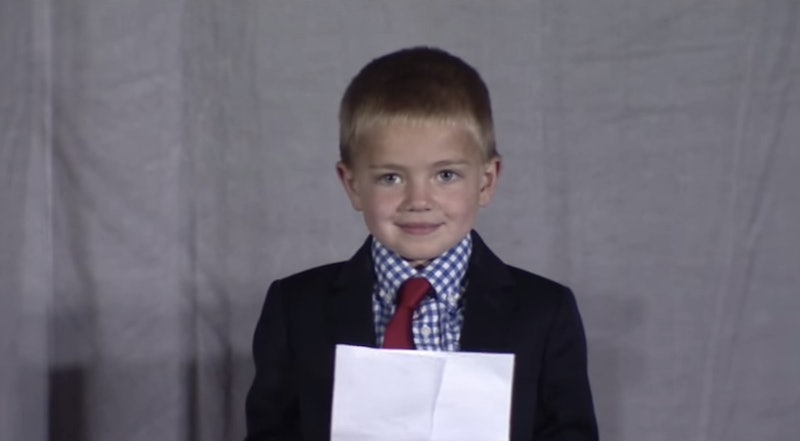 If this appeal doesn't turn your anti-vaccination beliefs on their collective head, there is simply no hope left. In what can only be described as the cutest, if not most convincing, call for parents to vaccinate their children, 7-year-old cancer survivor Rhett Krawitt is begging parents to vaccinate their children, so that little boys and girls like Rhett, who have medical conditions that preclude the possibility of their own vaccinations, stay safe from highly contagious and potentially deadly diseases like measles. So even if you're not interested in keeping your own children safe, consider Rhett when making your decisions about the kids' next shots.

The Krawitt family lives in an area of California that boasts the highest proportion of school children with personal-belief exemptions from life-saving vaccines. And while the generally mentality surrounding vaccinations is self-preservation, it is also important to note that these shots are key to a phenomenon known as "herd immunity," wherein enough people in a group are immune to a disease so as to prevent an outbreak. This means that even if one person were to contract a disease like measles, his or her community would remain relatively safe, given the high rate of vaccinated individuals. However, in certain areas of California, school districts are growing dangerously close to losing that factor, meaning that a single case of measles could spell disaster as it spreads, ill-contained, throughout a region.

For measles, the necessary proportion for effective herd immunity stands at 92 percent. In Marin County, where Rhett goes to school, fewer than 85 percent of children are fully vaccinated. Now that Rhett has successfully battled leukemia, he should not have to live in fear of contracting measles, a disease that was all but eradicated in the United States a few decades ago. Indeed, after undergoing the fight of his life so early on, the last thing he needs to do is battle stubborn parents who have latched onto unfounded claims and pseudoscience that is not only petulant, but now presenting a very real health risk.

The great irony of the refusal to vaccinate children, particularly in California, is that those who are choosing not to do so represent some of the wealthiest, and indeed, smartest citizens in America. In fact, according to a study conducted by Wired Magazine, just six out of the 12 Bay Area tech and biotech companies' daycare centers had vaccination rates that were conducive to herd immunity. And in one Google facility, just 49 percent of children were completely vaccinated. That, as former New York Jets linebacker Bart Scott would say, "can't stop a nosebleed."

Of course, in Google's defense, it is very likely that these numbers are outdated, as parents have yet to provide the updated vaccination records to the facilities. But still, with less than half of registered children up to date on their shots, the statistics are concerning.

And they're especially concerning to kids like Rhett, whose long bouts of chemotherapy and other drugs have rendered him incapable of receiving his measles vaccination for a full year after being first declared cancer-free. Although he'll be receiving his shot in a matter of days, he must also depend on other vaccinated children to keep him safe from measles and other highly infectious diseases. The Krawitt family took a stand against unvaccinated children in a rather high-profile push last month for statewide legislation that would disallow unvaccinated children from attending public schools.

In a speech on Tuesday to the school board and local elected officials, Rhett, who dressed to the nines for the occasion in a blue sports coat and green sneakers, told an enraptured audience,

The school board sided with the 7-year-old, and while their vote was largely symbolic, it does represent a shift in the general attitude of a state that has now become infamous for its refusal to give its children their necessary shots. Rhett's father, Carl Krawitt, also spoke to the board, saying, "Our culture emphasizes the individual story more than the need for people to see how their choices can infringe on the health of others. We have an obligation to send a message. The risk of getting any of these diseases go far beyond our school."

In an interview with ABC News, Mr. Krawitt also noted, "The importance of vaccinations is about the expectant mothers and babies under the age one and hundreds of children who are at risk for getting these disease that don’t even need to be here. It’s really around making sure that we have public health policy that protects everyone in our community." The lack of vaccinations in the state has been markedly debilitating for Rhett and his family, who avoid things like public transportation for fear that he contract measles or a similar disease. And with 121 reported measles cases, 99 of which have been in California, their fears are far from unfounded.

So parents, listen to Rhett. He gives a damn, and so should you.