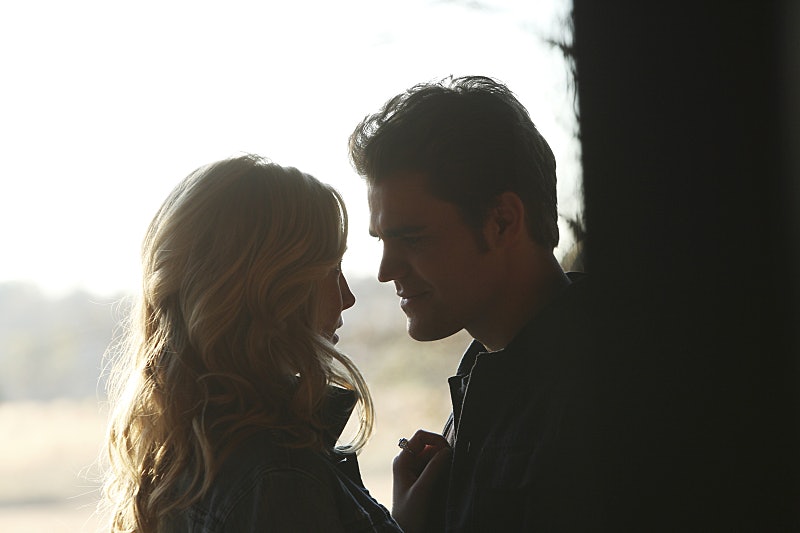 Anyone else feeling a little faint right now? It’s totally OK to admit if you are because DAMN that was one hot and steamy lip lock. No, you weren’t hallucinating, people. Stefan and Caroline had their fist kiss on The Vampire Diaries during Thursday night’s episode “Stay,” and boy oh boy did it exceed all expectations. I guess this just goes to show that even when you know something is coming, it still doesn’t really prepare you for what’s to come. I’ve never really considered myself a genuine Steroline supporter given my undying love for Klaroline, but after this week I may have to think about converting. Maybe.

Basically, it all went down as expected in regards to context. Stefan was helping Caroline tidy up Caroline’s family cabin, so that her mother, Sheriff Forbes, could live out her final days in a peaceful setting. The two of them started talking and Stefan spouted out some very poetic words right before holding her hand. Before you know it, boom: they engaged in one very epic smooch that contained a deep and special tenderness that can only be found when close friendship turns into something more. I mean, it didn't have the raw, passionate, lusty feel of a Delena kiss, but it wasn't supposed to. That doesn't reflect this particular relationship.

The kiss was sweet and sensual and made the wait seem rather worth it. Though, to be fair, I haven't been waiting for this nearly as long as some fans have, but I'm guessing they're feeling pretty satisfied right now. I also appreciated that it wasn't done in the woods up against a tree. (That's totally Caroline and Klaus thing.) But now what I'm most curious about is what happens next. Are they in a relationship now or will they be one of those couples that would rather not put a label on things?

Stefan admitted that he wasn't spending all that time with Caroline because Liz asked him to. It's because he truly cares about her. But neither party seemed to regret the kiss in any way, so that's definitely a positive indicator. (Anyone else extremely curious to see how Elena will react to this?) Either way, Steroline fans have plenty to look forward to in the near future if this heartwarming scene is any indicator.