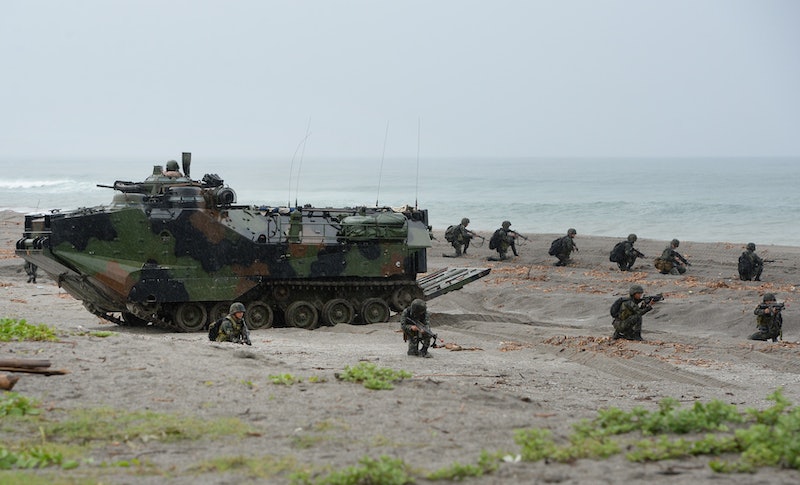 A training accident on a southern California military base on Thursday sent 22 Marines to hospitals with inhalation injuries, NBC News reported. A fire extinguisher system discharged inside an assault amphibious vehicle during an exercise at the Marine Corps Air Ground Combat Center at Twentynine Palms. Initial reports about the severity of the injuries were not clear, but a press release from the Marines indicated that all the injured were in stable condition. The injured were Marines and sailors of the 2nd Battalion, 3rd Marine Regiment, according to a press release on the Marines website.

Marines spokesman Dave Marks told Fox News that three of the injured Marines would remain in the hospital overnight, but the rest would return to the training program. Marks said the fire extinguisher discharge released halon into the vehicle, but that there had not been any fire at the time of the incident. Assault amphibious vehicles are kind of like underwater tanks, and are used to transport troops, weapons, and other materials from ships and underwater vehicles to shore.

Discharging a fire extinguisher in a confined space like a tank or similar vehicle can be dangerous because the basic premise of the various chemicals used in different kinds of fire extinguishers — some use CO2 or carbon dioxide, some use a dry chemical — is that they remove oxygen from the atmosphere around the fire, so that the fire can't continue to burn. According to the Marines website, its assault amphibious vehicles are equipped with two handheld fire extinguishers.

The assault amphibious vehicle was part of a live-fire drill at the base, which is in the Mojave Desert. It's located just outside the town of Twentynine Palms, in San Bernadino County.

The Los Angeles Times describes the base as the site of large-scale Marine exercises that use tanks and airplanes. Battalions from other Marine bases train at the Twentynine Palms base, because the desert conditions creates realistic conditions for troops deployed to desert combat areas such as Iraq and Afghanistan.

In January, two Marine Corps officers were killed in a helicopter crash at the Twentynine Palms base, according to USA Today. That incident also occurred during a training exercise. It was also the site of a fatal accident in 2010, when a Marine was crushed by a bulldozer as he slept in a foxhole, according to the Desert Sun.